2020 started off with a bang on the first trading day of the year, as shares of Chinese tech giants Weibo (NASDAQ:WB), Netease (NASDAQ:NTES), and Sohu.com (NASDAQ:SOHU) shot up like fireworks. After topping 10% in early trading, as of 1:20 p.m. EST, Weibo stock remained up a healthy 9.6% and Netease 9.4%, and Sohu was still sitting atop a 10% gain. 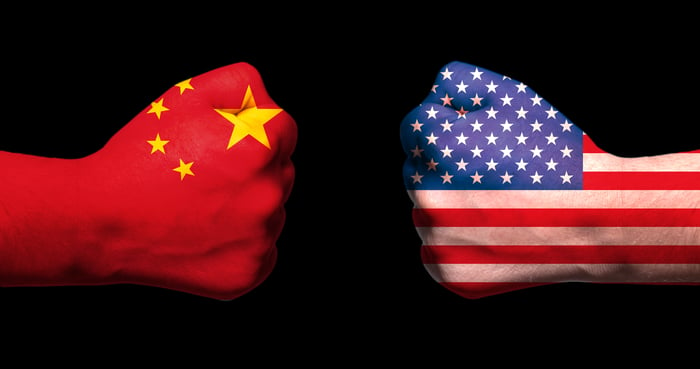 Why are these three stocks up so much? Seeing no news of note pertaining specifically to any of them today, my best guess is that investors are reacting to President Trump's New Year's Eve declaration that he plans to sign a "phase one" trade deal with China on Jan. 15.

Reporting on the announcement Tuesday, The Wall Street Journal called it both "a formal truce in the U.S-China trade war" and perhaps a prelude to "a broader pact" to increase trade between the two nations. In this first step, the plan is for the U.S. to remove tariffs on roughly $156 billion worth of Chinese imports, and halve the tariff rate on a further $120 billion in Chinese goods. In exchange, China will agree to buy more agricultural produce from the U.S. "and liberalize its economy somewhat," says the Journal.

Now admittedly, it's not immediately clear why that would be good news for Weibo, NetEase, or Sohu. According to data from S&P Global Market Intelligence, all three of these e-commerce firms do their business entirely in China, neither importing corn from Nebraska, nor exporting dishwashers to Peoria.

That being said, broadly speaking, if Trump's trade war truce helps China's economy to grow faster, it will be good news for all kinds of domestic businesses -- Weibo, NetEase, and Sohu included.

At least, this seems to be what investors are betting on today.