With the busy holiday shopping season now complete, companies in the retail sector -- which are often highly dependent on year-end sales for their bottom lines -- will be coming under more scrutiny to see how well they did. Airfreight firms also benefit directly from the e-commerce frenzy during the last few weeks of the year and will be under added scrutiny as well as we head into January.

Despite the expected robust consumer spending on e-commerce this season -- and the added shipping revenue that invariably generates -- FedEx (NYSE:FDX) is still face headwinds and has some investors worried as no near-term solution is in sight. The second-quarter earnings report that came out in mid-December outlined a series of underlying market factors that are pressuring the company. Even though the stock price has recovered somewhat from its 52-week low just after the report, FedEx will be facing strong headwinds during 2020 and questions are growing about how much more recovery will come. 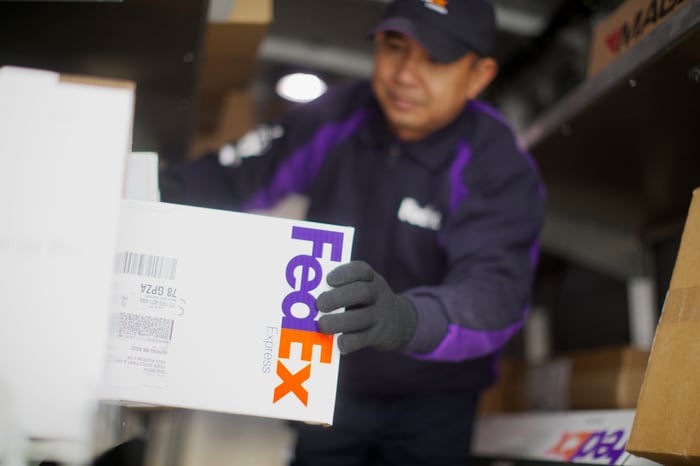 A second quarter to forget

By any metric, second-quarter results were a train wreck for FedEx. In the face of buoyant consumer spending on e-commerce, quarterly revenue fell by $500 million year over year to $17.32 billion. Net income fell to $560 million, down from $935 million in the same quarter last year. Operating margins collapsed to 3.2% from 6.6% the previous year. Similarly, earnings per share also nosedived to $2.13, down from $3.51. Analysts had expected $2.76 per share. A laundry list of reasons was given for the quarterly downturn:

The brutal competition in this highly transparent, commodified sector has put FedEx between a rock and a hard place. It is having to increase spending on infrastructure improvements, but its also being driven hard to cut costs.

Bad news on earnings calls is not necessarily new for FedEx. Following the company's first-quarter report in September, the share price also dropped sharply (down 12.9% on the day after the announcement). For the first quarter, net income, operating margin, and earnings per share all also fell well below analyst estimates.

"Fiscal 2020 is a year of continued significant challenges and changes for FedEx, particularly in the quarter just ended due to the compressed shipping season," said CEO Frederick W. Smith on the recent December earnings call. "We have significantly enhanced our e-commerce capabilities with strategic initiatives, including year-round seven-day FedEx Ground delivery, enhanced large package capabilities, and the insourcing of FedEx SmartPost packages."

The CEO explained that the company is making the changes it thinks are needed to address the issues, but those changes have yet to be reflected in the earnings reports. Smith added that the firm is focused on growing margins in foreign markets through cost-cutting, as well as leveraging more synergies from TNT Express (the European delivery service it acquired in 2016). He said he expects those gains to show up in 2021 reports.

Despite his efforts to put a positive spin on what was a disastrous quarter, Smith's comments did little to calm investors. That's because there is not much sign of a turnaround in market conditions for the embattled large-cap logistics firm.

Challenges from all sides

FedEx is taking on several issues all at once. For one, FedEx Express, a high-margin operation that accounts for 52% of the company's top-line sales, is losing revenue as more customers switch to its discount option FedEx Ground. While FedEx Ground was the one bright spot for the second quarter, with revenues increasing by 3%, it was at the expense of the other, more-profitable segment.

Then there are the concerns that continue to grow regarding the impact the U.S.-China trade war is having on operations as well as slowing economic conditions in the key Asia Pacific markets where FedEx operates.

One of the biggest issues is that, despite estimates that the air freight industry is expected to grow at a 10% yearly rate through 2026, market competition is becoming more fierce and keeping tight pressure on pricing and margins. UPS remains the dominant firm in the air freight sector. But also adding to the pricing pressure and competition is upstart Amazon. Once FedEx's largest client, Amazon is relying more and more on its own in-house logistics capability. Amazon Logistics now completes about half of Amazon deliveries. For 2019, Amazon expects this 50% share to account for some 2.5 billion packages delivered through its own service.

Facing all these underlying market factors, the operating margin for the second quarter fell from 7.4% to 3.9%. Management has also lowered earnings guidance several times and offered little in terms of concrete plans to cut costs effectively. All signs that the company doesn't have a good answer for what ails it.

In the long run, underlying market conditions may improve and cost-cutting should help margins, but many analysts are not waiting for that to happen and have already downgraded FedEx stock. Analyst Scott Schneeberger at Oppenheimer only expects "moderate improvement" in results over the second half of 2020.

"Although FedEx may have reached a trough and should progressively, albeit gradually, climb itself out, we believe the company's 'show me' status is likely to persist multiple quarters until it demonstrates enhanced certainty of a return toward historical Express/Ground segment margin levels," Schneeberger wrote in a December research report. The analyst is not counting on FedEx management actually delivering tangible results from is cost-cutting efforts anytime soon.

In the first earnings season of 2020, the stock will likely bounce for many retail-related companies after announcing improved sales during the 2019 holiday shopping season. Much of this spending will have been directed through e-commerce channels and, indirectly also resulted in added revenue for logistics operators. While evidence of strong consumer spending in 2019 on retail and e-commerce should help the airfreight sector, FedEx will likely be left behind. Until management can account for competition and deliver on cost-cutting and restore profits margins, FedEx stock is not worth picking up as an investor.