Leadership training and organizational consulting dynamo Franklin Covey (NYSE:FC) will report its fiscal first-quarter 2020 earnings on Jan. 9 after the close of trading. The company completed a turnaround in its fiscal 2019 that helped its stock soar by 44% during the calendar year. However, with much of the heavy lifting of that transformation now complete, will investors maintain their enthusiasm? Below, we'll discuss the company's recent progress, and why its successes of the last 12 months may be hard to top during the next 12.

Reaping the rewards of a strategy shift

Franklin Covey reached a significant milestone in fiscal 2019 as it successfully finished a three-year shift of its revenue framework to a subscription model. The organization's subscription momentum was clear from the progress of its flagship "All Access Pass," which proved especially popular among larger enterprise customers. Total revenue in 2019 increased by 7% to $225.4 million, but more importantly, subscription revenue jumped by 23%.

Other indicators commonly used to gauge the success of software-as-a-service (SaaS) companies also exhibited vibrancy. Franklin Covey finished fiscal 2019 with a deferred subscription revenue balance of $58.2 million (up 20%), and its unbilled deferred revenue balance advanced by 22% against the balance at fiscal year-end 2018, to $30 million.

That rapid growth in subscription-based revenue helped investors view Franklin Covey as a viable SaaS business, and the market rewarded its brighter prospects. The company backed up its top-line performance with significantly higher margins and earnings: Adjusted EBITDA (earnings before interest, taxes, depreciation, and amortization) climbed 73% to $20.6 million, and net loss dwindled to $1 million against nearly $6 million in fiscal 2018. 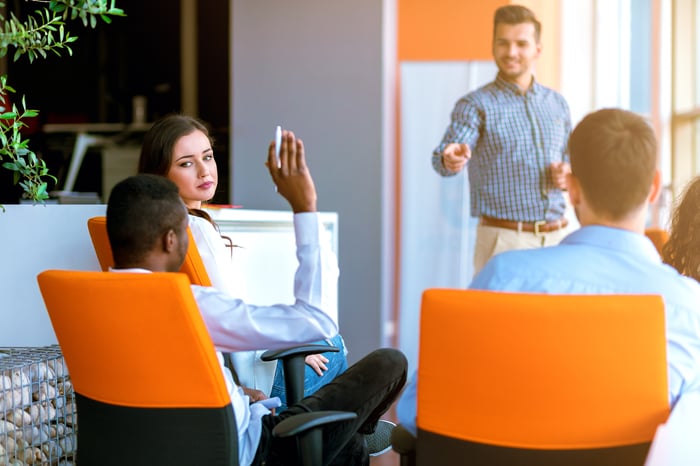 Franklin Covey is closely focused on one outlook item, and it's something that it is encouraging  investors to monitor over the next 12 months. In its last quarterly report, management advised shareholders to expect fiscal 2020 adjusted EBITDA of between $27 million and $32 million. At the midpoint of that range, that would be a torrid 43% improvement over fiscal 2019.

Adjusted EBITDA is also the barometer by which Franklin Covey wants the market to measure its progress for the foreseeable future. Management has forecast annual adjusted EBITDA increases all the way out to fiscal 2022, when it projects they will land between $45 million and $50 million, which (at the midpoint) would mark a 130% increase over fiscal 2019.

An expensive valuation ... for now

After its highly successful year, Franklin Covey's stock may find itself in a more vulnerable position during calendar 2020. Shares were actually up as much as 75% in November before they began a gradual descent that left them finishing the year with a gain (as mentioned above) of 44%.

We can infer from this that investors may have already priced in the earnings benefits that will accrue from the company's turnaround, which leaves Franklin Covey stock at something of a crossroads. The company is still experiencing rapid adjusted EBITDA growth, so it's unlikely to see a major stock decline as long as it keeps within management's guidance ranges.

On the other hand, there may be a bit of a cap on potential stock appreciation unless the organization begins to outpace its 2020 outlook. This is because, for the first time in years, Franklin Covey will generate net income according to generally accepted accounting principles, or GAAP, in fiscal 2020. This means investors can finally calculate a forward P/E ratio for the company -- and currently, it  stands at a lofty 78.

That valuation level may seem extremely high for this small-cap stock, but if Franklin Covey achieves its adjusted EBITDA growth projections over the next three years, the associated GAAP earnings will lower its forward P/E ratio to one that's more in line with those of its peers. Nonetheless, this temporary pricing phenomenon is providing investors with reason to feel skittish about the company's upcoming year. One or two quarters of outperformance in 2020 may be what it takes for Franklin Covey to successfully navigate through these waters.