The Simply Good Foods Company (NASDAQ:SMPL) has scheduled its fiscal first-quarter 2020 earnings report for Wednesday, Jan. 8 before the opening bell rings for trading. The wellness-themed snacks, shakes, meals, and confections distributor simply outperformed in 2019, booking a share price ascent of 51%. Let's zero in on key numbers and themes that investors should be familiar with before interpreting Simply's latest batch of results next week.

In 2019, Simply Good Foods increased net sales by nearly 21% to $523 million, with the small caveat that the year included 53 weeks, versus 52 weeks in fiscal 2018. This sterling double-digit improvement was propelled by vigorous retail takeaway, i.e., store purchases by consumers. The lion's share of the company's growth during the quarter was supplied by its well-known Atkins brand, which has evolved from a diet label to a wellness and lifestyle platform. During Simply's fourth-quarter 2019 earnings conference call, CEO Joe Scalzo observed that the Atkins brand has chalked up 11 consecutive years of retail takeaway growth at a compounded annual growth rate of 15%.

After a year of superlative expansion, management expects the top line to moderate next year. The company's fiscal 2020 outlook anticipates annual revenue improvement near the high end of its long-term growth goal of 4% to 6% (bearing in mind that fiscal 2020 will have one fewer week than fiscal 2019).

As for earnings, the company advised investors last quarter that adjusted EBITDA (earnings before interest, taxes, depreciation, and amortization) will grow "at a somewhat higher rate" than its expectation for net sales. In other words, adjusted earnings are expected to fall within or slightly exceed a 4%-6% growth rate, against the benchmark of $98.7 million in adjusted EBITDA that was booked in fiscal 2019. 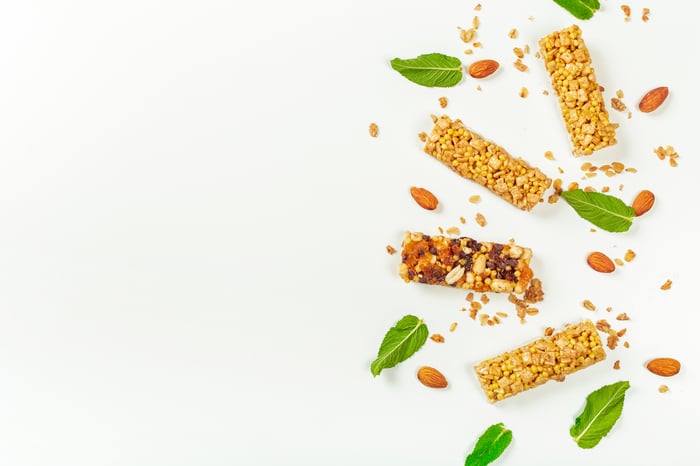 Simply Good Foods was formed by the merger of the Atkins brand with the Canadian SimplyProtein brand in July 2017, and since then, management of the consumer staples upstart has steadily increased distribution of SimplyProtein snack bars in the U.S. It's also increased media spends to promote SimplyProtein's line of "clean-label" products in the U.S.

As I pointed out last quarter, as Simply Good Foods approached its fiscal 2019 year end, it ramped up advertising in support of both Atkins and SimplyProtein product lines. Selling and marketing expenses in the fourth quarter jumped nearly 20% against the prior-year period as Simply Good Foods turned up the volume on its TV advertising and e-commerce investments.

Management believes that aggressive investment in the company's brands is necessary to keep revenue at or above the waterline of its long-term 4%-6% annual growth target. Of course, given a projected near-term cooling of sales, the company may be vulnerable to some operating margin compression as it bumps up its media spends. In next week's report, investors should compare the first quarter's selling and marketing expenses as a percentage of sales to those of the prior-year quarter (approximately $15.3 million) to grasp the extent of new spending.

The transaction was funded by a mix of cash, stock, and new debt undertaken by Simply Good Foods in the amount of $460 million. The company added a term loan of $460 million to its existing credit facility, bringing its total term loans under the facility to $656 million.

By my estimate, the company now sports a debt-to-adjusted EBITDA ratio of 6.5 times. That's fairly high leverage, but in its press release on the merger, Simply's management stated that the company plans to pay back a portion of its term loans in fiscal 2020, with the aim of bringing the debt-to-adjusted-EBITDA ratio to under 3.75 times in the current fiscal year.

Shareholders can expect management to outline revenue, margin, and net earnings implications of the purchase in its upcoming filing. Management is also likely to address any potential cost synergies, and to discuss its plan to reduce debt in more detail, when Simply Good Foods holds its quarterly post-release earnings call.