I remember wondering why all my favorite stores from my teen years, such as Gap (NYSE:GPS), are still around when I'm shopping for my kids, but my mother's old faves were gone by the time I hit the shopping scene.

Well, the time of obsolescence may have finally arrived. As we enter a new decade, Gap may no longer be relevant.

Why Gap stock is up

Gap shares lost 28% of their value in 2019, even after briefly spiking to over $31 early in the year. The consumer discretionary stock plummeted over the summer and has been swinging between bad and worse since, but it's been on the rise over the past month.

The company announced the departure of CEO Art Peck in early November and then released its dismal third-quarter earnings results later in the month. Not too long after that, the stock price started to pick up. 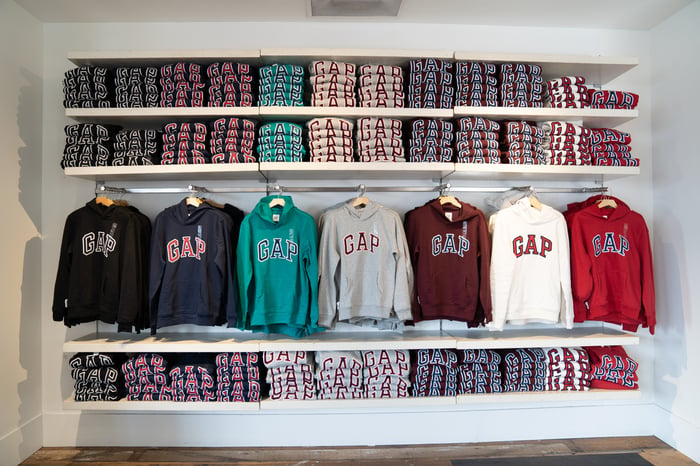 There are a number of reasons this might have happened:

However, with declining revenue and a product line that seems out of date, Gap will need to make a phenomenal effort to stay afloat.

What Gap can still do to save itself

Is there any way for Gap to get back to its glory days? The company is feverishly evaluating what it can do, starting with Art Peck's decisions to spin off Old Navy, close mall stores, and increase its presence in areas that service its clientele.

Finding a new CEO to lead is a good next step for a struggling company, and it looks as if Gap is taking the search seriously by taking its time.

Gap's doing well with in-store pickup for online purchases. Customers love this option in general, and Gap, with its over 2,000 stores, can turn this into a huge asset, as Target does.

Most importantly, Gap needs to reinvent itself as a current, fashion-conscious brand that fills its customers' needs. Bloomberg quoted Dana Telsey, CEO of Telsey Advisory Group: "If you don't have the right product, you aren't able to sell goods at full price. There's work to be done on the core product."

Why it's looking bleak

Gap is still a huge name, with $4 billion in sales for the third quarter of 2019. That's a lot to work with. The company hopes to grow annual sales for its brand of women's athletic-wear, Athleta, to $2 billion within a few years, even as the company's other brands are seeing declining sales. But one minor brand in its portfolio won't save the company.

The company needs a major overhaul to survive, and it's not clear that it can make that happen. Gap has been through a series of CEOs since its 1990s heyday, but no one has been able to help it make its comeback. It's already implemented several important changes, but they haven't yielded results. CFO Teri List-Stoll said about Banana Republic's third-quarter results, "Our minus-3% comp simply didn't reflect the sequential improvement that we had expected coming into the quarter." Why is that? Is the company out of touch with its abilities? Its customers? it needs to answer some serious questions before it can anticipate a rebound.

Gap has ambled along despite slowing growth over the past two decades, but it's now facing a challenging retail environment in which many apparel companies are seeing sales declines. This may not be Gap's final act, but things may get worse before they get better.