It's been a tough year for eBay (NASDAQ:EBAY), as it tries to turn around its marketplace business. The year-over-year growth in gross merchandise volume (GMV) -- which includes the total value of all closed transactions in the marketplace -- decreased by 2% in the third quarter. This is while the global e-commerce market increased by around 20% over the last year, according to estimates from eMarketer.

Management continues to make changes to the customer experience and push out its marketing and payments service to make it easier and more cost-effective for sellers to do business on eBay's platform. But eBay has been struggling with slowing growth for years now. Investors have placed the blame on Amazon.com's (NASDAQ:AMZN) fulfillment program, which lets merchants utilize Amazon's warehouses and free shipping offers to sell used or new items to millions of Prime members.

However, there are other potential threats from smaller players that eBay needs to worry about. One of those is Etsy (NASDAQ:ETSY), the fast-growing upstart led by a former eBay executive that's known for its offering of handmade and vintage items. 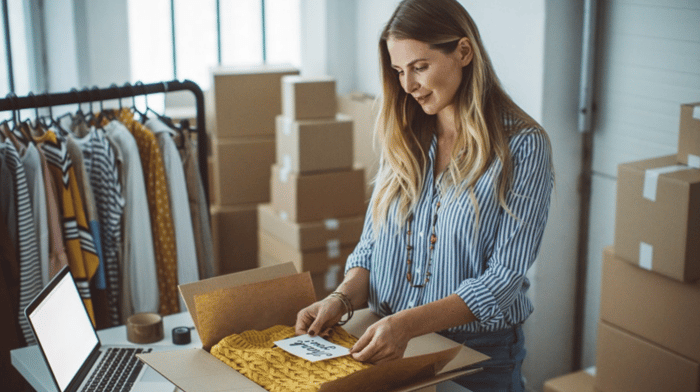 Has Etsy built a better mousetrap?

Etsy is growing much faster than eBay. Gross merchandise sales on Etsy's marketplace grew 30% year over year in the third quarter. It's clear that Etsy is gaining e-commerce market share while eBay is losing it.

This is not to say that Etsy is taking business away from eBay. eBay generates more than $10 billion in annual revenue and has 183 million active buyers. Etsy hasn't even cracked the $1 billion revenue level yet, so the seller of vintage goods is still small potatoes compared to eBay.

But Etsy's success so far is largely due to the capabilities it has gained in mission-critical areas like search, marketing, and item discovery -- areas in which eBay is still trying to get better.

One advantage working in Etsy's favor is that it has marketed itself as a place to discover items from the get-go. It's a marketplace of nearly 50 million buyers and sellers with 63 million items currently offered for sale, many of which are unique and one of a kind. This differentiates Etsy's marketplace from not only eBay but also giants like Amazon. Keep in mind: Amazon has its own third-party seller platform for handmade goods (Amazon Handmade), which makes Etsy's growth even more impressive.

eBay has its roots as an auction site, but it has increasingly tried to shift its image to a seller of new items with "Buy It Now" checkout options. As growth has slowed, eBay has had to undergo significant changes to its marketplace, such as overhauling how it leverages listing data in order to improve search. Plus, it is struggling to find the right marketing formula to stimulate engagement in its marketplace business.

Meanwhile, Etsy seems to have its growth formula nailed down. Its recent robust growth shows a company that is getting good returns from investments in search enhancements and marketing. In the third quarter, Etsy launched new search capabilities, upgrading its context-specific search ranking algorithms. Because Etsy has its roots in offering one-of-a-kind vintage items, it has already developed the technical know-how to build its search technology that helps buyers find specific items, which is fueling its growth.

Etsy's marketing investments are leading to improved buyer retention and engagement as noted by the increase in gross merchandise sales per active buyer. eBay is experiencing the opposite trend as growth in GMV slowed to below the rate of growth of active buyers recently.

Perhaps the most alarming comparison between these two marketplaces is active buyer growth. Etsy acquired seven million new buyers over the last year, excluding the acquisition of Reverb. That is slightly higher than eBay's increase of six million. That discrepancy may continue to widen in Etsy's favor as it grows into a larger business. 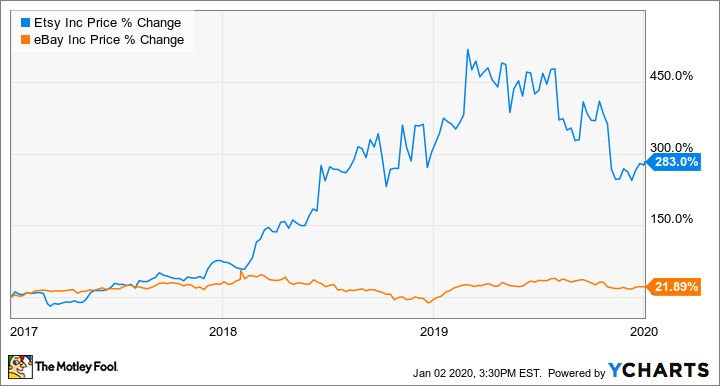 Another competitor is emerging

It's not over for eBay. More sellers are using the new promoted listing service, which caused the take rate (the percentage of net transaction revenue to GMV) in the marketplace to improve slightly in the third quarter. Revenue from promoted listings surged 120% year over year to $103 million in the last quarter. eBay's take rate in the marketplace business is currently 8.9% but should move higher as promoted listings gain traction with more sellers, and that could help revenue grow a little faster, but buyer engagement is still a problem eBay needs to solve quickly.

Etsy's take rate has improved from 13.9% to 17.1% over the last two years. Both companies must be careful in managing the take rate, because if they are too aggressive in monetizing transactions, that can cause sellers to leave. But Etsy has had no problem maintaining stellar growth and attracting sellers even as it tinkers with seller fees, which says a lot about its offering.

All of this isn't to say that Etsy is a direct threat to eBay -- at least not yet. Etsy has a niche offering of boutique goods, whereas eBay sells big items like cars and industrial goods. But as Etsy scales its business and crosses that $1 billion revenue threshold, it could start overlapping with some categories on eBay down the road.

The thing eBay should be concerned about is that Etsy knows how to build effective search technology and cultivate a vibrant marketplace, which could leave eBay selling nothing but the big items in the long run. That's a problem for investors looking for more growth.