Bouncing back from the 3% dip they experienced in November, shares of Newmont Goldcorp (NYSE:NEM), an industry leader in gold production, climbed 13% last month, according to data from S&P Global Market Intelligence.

While the stock's move last month is unsurprising, considering the price of gold crept 3.7% higher, there were a number of other factors that contributed to the increased buying activity, including the announcement of a new stock buyback plan and two asset sales. 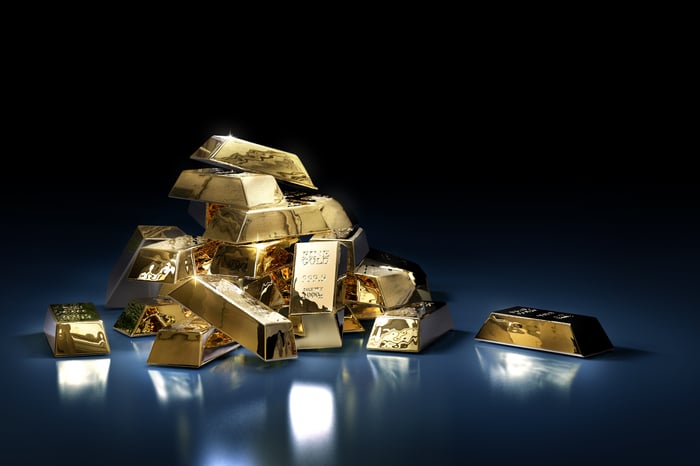 Newmont's shareholders didn't have to wait very long into December before they received tidings of joy. Early in the month, management announced a $1 billion stock repurchase program to be implemented through 2020. Taken in concert with the $1.44 per share in dividends it distributed in 2019, it's clear that Newmont is intent on returning value to shareholders. The stock's current yield of 1.3% is one of the highest yields among its peers.

Investors found further causes to celebrate in the last month of the year, as the company revealed its continuing effort to streamline its portfolio. For one, Newmont announced that, in support of Zijin Mining Group's bid to acquire Continental Gold, it had agreed to sell its 19.9% equity stake and its convertible bond for $260 million. The transaction and the previously announced sale of Red Lake for $375 million are both expected to close in the first quarter of 2020.

But wait -- there's more. Two weeks later, Newmont indicated that it was shedding even more of its assets, announcing the sale of its 50% stake in Kalgoorlie Consolidated Gold Mines (KCGM) for $800 million in cash. In total, Newmont's transactions are expected to provide the company with more than $1.4 billion in cash.

Newmont wasted little time after the celebration of the new year before it completed the first in its string of transactions. On Jan. 2, the company announced that it successfully completed the sale of its stake in KCGM, receiving cash proceeds of $800 million. With the divestiture of KCGM, Newmont reduced its 2020 consolidated gold production forecast from 6.7 million ounces to 6.4 million, while all-in sustaining costs for 2020 remain unchanged at $975 per gold ounce. Sustaining capital guidance for 2020, moreover, has also been lowered to $950 million from $975 million. In the coming quarters, it will be interesting to see how the company and its more-streamlined portfolio fares in achieving its goal of increasing free cash flow.