2019 was a rough year for ridesharing stocks.

Though Lyft (NASDAQ:LYFT) and Uber (NYSE:UBER) both made big splashes on the public market with their IPOs last spring, the two ride-hailing stocks are down significantly from their debuts, falling 40% and 34% respectively, as the chart below shows. 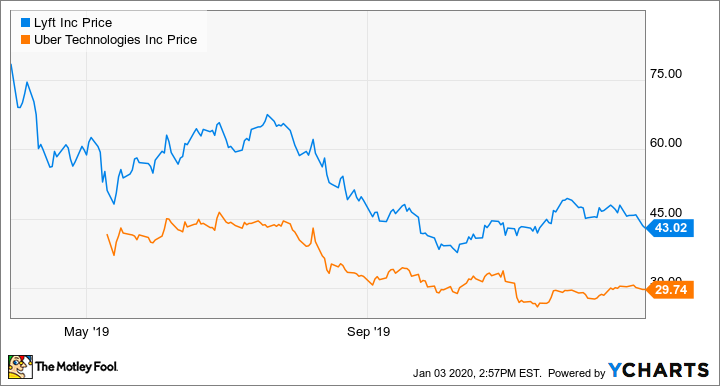 Considering last year's troubles, investors may be hopeful for a comeback, but there are a number of reasons to be skeptical of a recovery in the industry. Let's take a look. 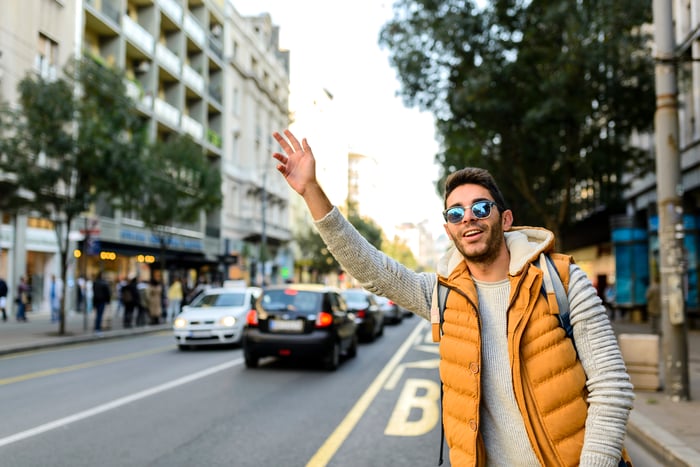 1. The regulatory environment isn't getting any better

Red tape continues to abound in the industry as operators like Lyft and Uber have often run afoul of local regulations and upset both bureaucrats and their own drivers.

In California, AB5 just became law, making it difficult for companies like Uber and Lyft to classify its drivers as independent contractors rather than employees. Both companies have promised to fight the law, along with peers like DoorDash, Instacart, and Postmates.

A number of airports, including Los Angeles, Phoenix, and Boston, have effectively ended curbside pickup for ride-hailing apps, making a key use case much less convenient. In New York City, the country's biggest ridesharing market, the two companies have faced a number of incremental restrictions, including a cap on licenses, a minimum driver wage, and an attempt to limit cruising time when a driver does not have a passenger.

Outside of North America, where only Uber operates, the company also lost its license to operate in London for the second time last November.

Though these regulations haven't stopped users from catching an app-based ride, they show that in a number of markets, Uber and Lyft are only facing more challenges, which stand in the way to greater growth.

2. The financials are still ugly

Uber and Lyft received cheers from investors when both companies said they would be profitable on an Adjusted EBITDA by the end of 2021. While those statements helped reassure investors that the companies see an end to the pools of red ink they've accumulated thus far, Uber and Lyft now need to execute on those goals while maintaining a high growth rate. That won't be so easy. It's also worth remembering that an Adjusted EBITDA profit is a long way from a generally accepted accounting principles (GAAP) profit.

Lyft, for example, took a solid step toward profitability in its third quarter, but that came as the company cut back on sales and marketing expenses, including coupons and promotions for rides, which could affect its growth over the coming quarters. New rider growth also slowed measurably in the third quarter.

The ridesharing market is maturing and the growth rate for both companies should gradually decline. If the "price war" between the two companies begins to ease, that could help their bottom lines. But it could also result in lower top-line growth at the same time as customers look toward other options, including conventional taxis, other ridesharing apps, and their own vehicles.

Given their deep losses, the valuations of both stocks remain elevated, adding pressure to the stocks.

The collapse of the WeWork IPO helped usher in a new era for cash-burning IPO stocks. Investors have grown impatient with companies that are losing hundreds of millions of dollars annually, or even billions, and have no clear path to profitability. Like WeWork, Uber also raised billions of dollars from Softbank and typifies this kind of company, whose Amazon-like ambitions have helped it raise capital but don't match the reality on the ground.

In the food delivery industry where Uber competes, we've seen Grubhub shares collapse largely because of the effect of Softbank-fueled competition in a market with few barriers to entry. Grubhub's profits have evaporated as rivals like Uber Eats and DoorDash have spent heavily on marketing. The dynamics of the ridehailing industry may turn out to be similar, as steep competition between Uber and Lyft will mean slim profit margins, if any.

Though ridesharing apps overall have changed the transportation industry forever, the businesses themselves exhibit few of the qualities needed to generate long-term profits and a competitive advantage. After the WeWork debacle, investors seem to be becoming attuned to that fact, which will make it even harder for Uber and Lyft to recover their losses in 2019.

Though the stocks may look cheap following last year's slide, at this point the risks still outweigh the benefits for both Uber and Lyft stock.