Gilead Sciences (NASDAQ:GILD) and Biogen (NASDAQ:BIIB) are two cheap stocks for healthcare investors to consider today. Neither stock has performed particularly well over the past few years, and both have significant question marks. They're risky buys, but if they perform well in 2020, their share prices could take off. Let's take a look at which one is the better buy for not just this year, but for the long term as well.

Will Gilead's pipeline be enough to save the crashing stock?

In five years, Gilead's share price has fallen by more than 35%, and over the past 12 months its returns have been flat. In contrast, the Health Care Select Sector SPDR Fund has risen by 45% in five years and increased by 22% in the last year. Gilead's been an underperformer for years, as not only have its sales been shrinking from $32.6 billion in 2015 to just $22.1 billion in 2018, but profitability has also fallen from $18.1 billion to $5.5 billion during that time.

While HIV product sales of $14.6 billion in fiscal 2018 rose by 12% from the prior year and are up 25% in two years, there's been a more profound decline in the sale of Harvoni during that time. Harvoni treats patients who have Hepatitis C, and in 2016 its product sales totaled $9.1 billion. The drug then declined to just $1.2 billion in 2018, decreasing more than 86% in only two years. The change in Gilead's product mix is also likely the reason for the change in its product gross margin, which in 2016 was 86% and is now at 78%. Falling sales along with a declining gross margin only make it more difficult for the company to cover rising expenses. 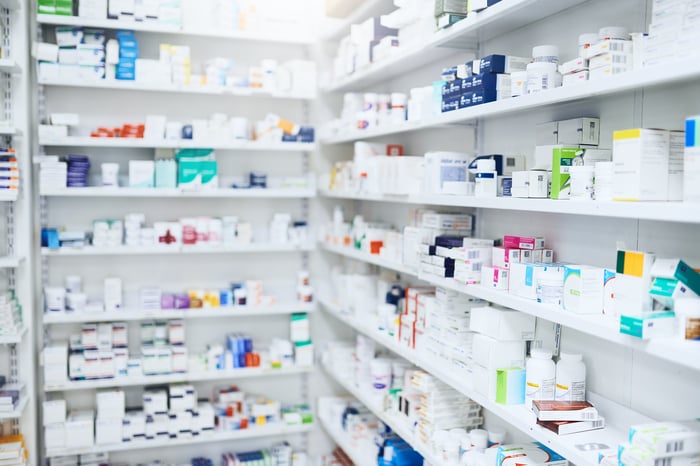 The company needs new products to help turn around its numbers and inject some growth into its financials. The problem is that although it has many products it is working on with more than 100 active clinical studies, it's too early to tell if any one of those will be able to generate the sales needed to make Gilead an attractive buy. Outside of its HIV products, only two -- Harvoni and Epclusa -- had sales of more than $1 billion in fiscal 2018. New products are great for growth, but finding a winner is easier said than done.

Is Biogen too dependent on the success of one drug?

Biogen is another stock that's struggled in recent years, but its decline has been more modest than Gilead's, falling 14% in five years and just 4% over the past 12 months. However, the stock dropped $100 last March when the company scrapped trials relating to its key Alzheimer's drug, aducanumab, which did not have encouraging results. The company did not believe it was likely to pass late-stage trials. Biogen's stock dropped from $320 to below $220 in just two days.

However, in October, the company flipped the script and said it was going to seek approval for the drug in the U.S. after additional data showed that one of the trials was successful. While the reversal did not entirely make up for the losses the stock incurred in March, it did help rally the share price, which closed 2019 just short of $300.

The problem for Biogen investors is that they need good news from aducanumab or the stock could be headed back down in a hurry. Over the past nine months, the company's sales have grown by just 4.9% from the same prior-year period. While multiple sclerosis product sales during the past nine months of $6.3 billion continue to make up the bulk (75%) of the company's sales, they're also down from the prior year when sales were $6.4 billion. Spinal muscular atrophy drug sales of $1.6 billion from Spinraza represent the only other segment that has more than $1 billion in revenue. While sales from the segment have risen an encouraging 24% in one year, Biogen needs more than that to stimulate its long-term growth.

Both of these healthcare stocks pose risks for investors today. Valuation multiples can change rapidly for either company depending on how their new drugs do, and that's why Biogen trading at less than 11 times earnings compared to Gilead trading at 31 times shouldn't be the only metric that investors consider today.

Biogen has more overall risk and dependency on aducanumab, which makes it hard to justify buying the stock today. While a good trial result will certainly help improve the company's prospects, it's proven to be too volatile with respect to the success of just one drug. That's why Gilead, despite trading at a higher earnings multiple and being the more expensive stock of the two, may be a better long-term buy since all of its hopes aren't in just one basket.