Amazon (NASDAQ:AMZN) shares are trading only 8% lower than the record high reached in 2018, but the shares stagnated last year -- at least compared to retail rivals Target (NYSE:TGT) and Walmart (NYSE:WMT). The shares for those two omnichannel retailers increased 84% and 26%, respectively.

Amazon only gained about 13% in 2019, but analysts remain bullish on the stock. In fact, Amazon was named a top stock pick for 2020 at Baird and among best ideas for the year at Cowen Group. The company's efforts in the second half of 2019, such as free grocery delivery to Prime members and growing action to take control of its deliveries, have already started to pay off. Here are three reasons why: 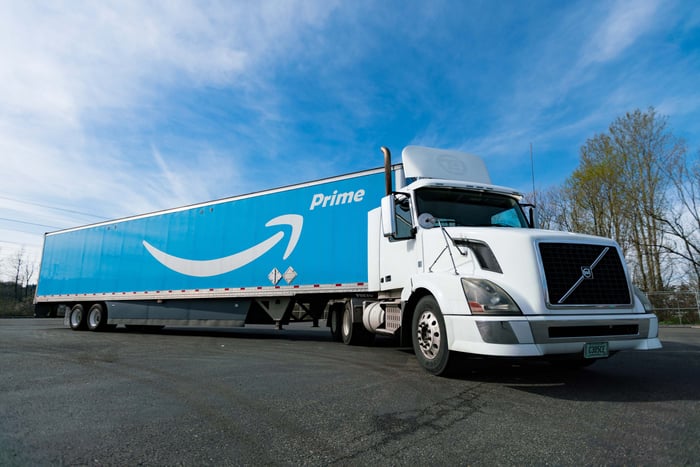 Amazon had good news for members of its Prime program in October. The retail giant began offering free two-hour delivery of groceries including meat, fish, produce, snacks, and household items to Prime members in certain regions. Prior to that, members had to pay $14.99 per month for the Amazon Fresh delivery service. Prime members still pay $119 per year for membership in the program that includes free shipping of eligible items, online book downloads, and exclusive deals among other benefits.

Amazon hasn't announced specific numbers from the free grocery delivery initiative, but recent comments from the company show growth in deliveries. The number of Prime members who tried grocery delivery for the first time over the holidays jumped by 80%, Amazon said. The company also said the number of grocery items Prime members ordered during the holiday season doubled compared with the holiday season a year earlier.

Amazon didn't renew its contract with delivery partner FedEx Ground in August, and in December, Amazon put a temporary halt on third-party sellers' use of FedEx Ground, citing performance reasons. The retail giant has progressively been distancing itself from third-party delivery companies as it builds out its own delivery network. The plan is bearing fruit, according to Amazon. The company said its delivery network handled more than 3.5 billion packages globally last year. That number represents half of all of its orders worldwide, and Amazon's own network now delivers the largest share of its orders in the U.S., Vox reported, citing an Amazon spokesperson.

Each year, the holiday shopping season (from Black Friday through Dec. 24) represents a solid make-or-break opportunity for most retailers. Not every retailer has reported sales figures, but Amazon's comments on Dec. 26 are enough to show the company is among the winners of the season. It hinted at record sales, double-digit growth in-house as well as with third-party sellers.

The average analyst price target for Amazon shares is $2,167, offering investors who buy the stock now a 17% premium. From a valuation perspective, the shares are expensive, trading at a lofty 82 times earnings, compared to peers like Walmart and Target,  who trade at 24 and 21, respectively. But Amazon's seemingly endless offering of products and services that generate user growth might make it worth that high price. Growth in Prime, Amazon's control over its delivery process, and its increasing presence in the food delivery market are just a few of its growth drivers and make it a stock to watch, and perhaps buy, in 2020.