When we talk about winners in the retail world these days, department stores usually aren't part of the conversation. As a group, they had more than their share of troubles last year as online competition strengthened, mall foot traffic waned, and discount retailers and a highly promotional environment weighed on their ability to price their wares higher.

Nordstrom (NYSE:JWN) suffered from those headwinds too. The company has reported declining sales, and its stock price fell by 17% in 2019. But the department store chain's efforts, including its "buy online, pickup in store" (BOPIS) option, its broader e-commerce strategy, and its inventory management, may have combined to make it the holiday shopping season winner among its peers. 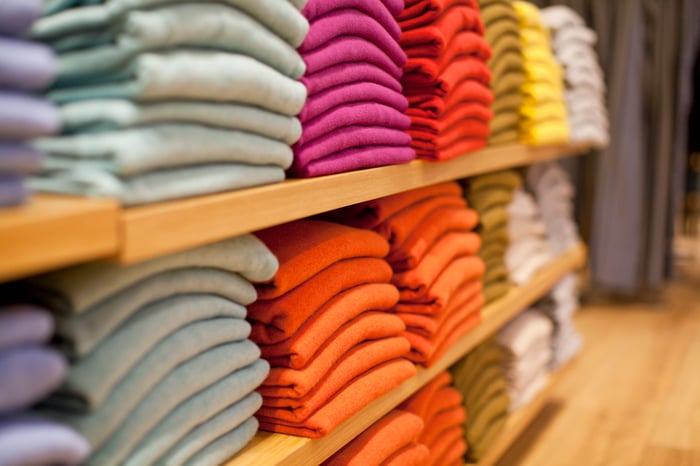 BOPIS was one of the keys to attracting customers over the holidays -- and the rest of the year too. According to Invesp, 50% of respondents in a shopping survey said they've decided where to shop online based on whether the retailer offers them the option to pick up their packages in a physical store. Studies also showed that 75% of shoppers who go to stores to pick up their orders are likely to buy more items while they are there.

Nordstrom was also efficient with its in-store pickup, fulfilling orders in less than four hours even during the busiest moments of the 2019 holiday season, according to Accenture Strategy's Kurt Salmon. The firm said that put it among the top four retailers for speedy order preparation. Nordstrom also shined in the customer-experience category. During its third-quarter earnings call, the retailer said order pickup is its most profitable transaction.

Shoppers are spending more time shopping online and less in physical stores, but Nordstrom is showing that it is evolving with the times. In its Q3 earnings report, the company said total digital sales gained 7% and e-commerce represented 34% of its business. Digital sales represented 31% of its sales during the same period a year earlier.

Its strategy of integrating its online channel with its physical stores includes order pickups and returns, as well as making a wide selection of products available both online and in stores. Nordstrom debuted this strategy in Los Angeles, then rolled it out across New York City, San Francisco, Chicago, and Dallas.

The company aims to extend it to 10 more markets by the end of 2020, but it's already is proving effective -- third-quarter sales growth in Los Angeles surpassed that of other markets. E-commerce is particularly important considering consumer spending trends. According to Mastercard SpendingPulse, department stores saw a 1.8% drop in sales over the holidays, but their online sales climbed nearly 7%.

While some retailers have found themselves saddled with rising levels of unwanted inventory, Nordstrom ended the third quarter without a surplus -- inventory was down 2.7%. The close connections between its physical stores and its e-commerce operation have helped with inventory control, allowing Nordstrom to offer the same merchandise across platforms rather than investing in additional inventory. Management said it plans to continue this shared inventory strategy as it expands its digital and physical store integration.

To keep inventory in check over the holidays, Nordstrom looks at customer feedback, determines what sorts of items people plan on buying and at what price points, then sets inventory levels considering those factors. Ahead of the holiday shopping season, Nordstrom said it was pleased with the early trends in gift buying.

Though Nordstrom hasn't commented yet about its holiday performance, the company's digital strategy and its inventory management are reasons to believe it was one of the season's retail winners. This doesn't mean its troubles are over. Its latest earnings report showed a decline in net sales, including a drop in its "full-price" segment. Competition with off-price retailers and online retailers isn't going away, and post-holiday promotions may be another hurdle, with retailers feeling pressure to slash prices or lose out on sales. But with the efforts Nordstrom has been making in key revenue-driving areas, there are reasons to be optimistic ahead of the next earnings report.