Nordstrom (NYSE:JWN) opened 2019 at approximately $44 per share, but unimpressive sales figures saw shares slide to $25 in August. Things have since improved, and the consumer discretionary stock currently sits at $38, but things are still far below the all-time high of more than $80 achieved in 2015.

The so-called retail apocalypse has drastically disrupted the brick-and-mortar consumer sales landscape in the U.S. since 2010, and apparel stores have been among the harder hit operators. Many retailers have been publishing poor results heading into the important holiday seasons, and there were some souring expectations ahead of Nordstrom's quarterly release.

Nordstrom's most recent quarterly results were a mixed bag that pleased analysts and investors. The company's net sales fell 2.2% year-over-year, but this was superior to analysts' estimates and marked improvement in trend from earlier quarters. While off-price sales grew 1.2%, this was more than offset by declining full-price sales. Importantly, digital sales increased by 7% and now generate 34% of the company's total revenue. While revenue staggered along—down slightly from the prior year—net earnings nearly doubled to $126 million. Gross profit rose a full percentage point, while operating expenses fell by $90 million, though most of this was due to a one-time credit charge in 2018. 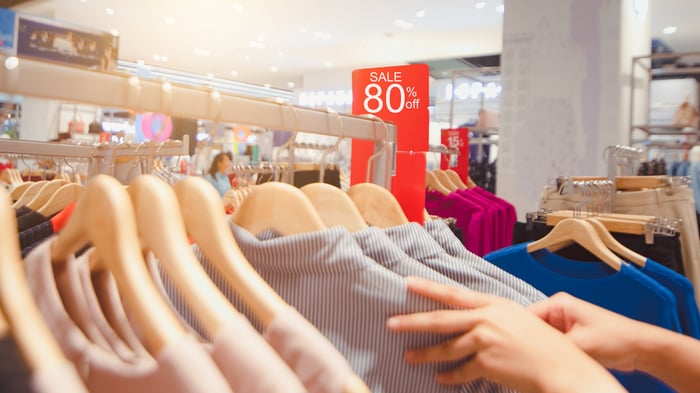 Nordstrom is expensive by some metrics but cheap by others

Nordstrom's price declines have led to forward price-to-earnings of 11.1, well below the department stores industry average of 16.8. The company is similarly below average based on its EV/EBITDA of 6.3. However, the company's recent capital expenditure has driven free cash flow down, and Nordstrom's 25.9 price-to-free-cash-flow compares unfavorably to the industry average of 14.3. Now that the new flagship store has been completed, capital spending is expected to fall back to a more reasonable level.

Nordstrom's capital structure is more debt-heavy than most of its peers. The company's debt-to-equity is 6.36, which is much higher than any major cyclical retail chain or apparel store. Debt could be a concern for equity holders if there is a lengthy economic downturn that threatens cash flows. But for now, Nordstrom has adequate liquidity and cash flow with a 0.79 current ratio, a 3.24 debt-to-EBITDA, and interest coverage of 9.1.

Nordstrom's has a strong outlook despite sharing risks with other retailers

Nordstrom has dedicated substantial resources to open a new Manhattan flagship store, which required an up-front investment in excess of $500 million. Analysts forecast annual revenues of approximately $700 million from the new location, which would drive 5% top-line growth on its own. This would also be an important piece of branding and market awareness, so the company identified this as a strategic element that is about to start bearing fruit. The new store had 85,000 visits during its opening weekend, instilling some optimism about its effects on the overall business.

The Consumer Confidence Index has declined over the past two years to its most recent figure of 100.11, since reaching a recent high of 100.9 in March 2018. The current level is the lowest since September 2015, though any number above 100 indicates an overall positive outlook among consumers. Declining consumer confidence is a bearish signal for Nordstrom because luxury items and goods with cheaper substitutes are often among the first to be abandoned during tighter periods. At a time with near peak unemployment and excellent growth among lower-wage jobs, it is worrisome that confidence is not higher.

Nordstrom will continue to struggle with an increasingly savvy consumer and the shift toward e-commerce. However, the company has positioned itself to capture more price-conscious shoppers with Nordstrom Rack, and its growing digital sales channel and expansion of in-store pickup options are both excellent strategies to weather the disruptive online trend.

Analyst and internal growth outlooks are not extremely bullish, with low-single-digit expansion likely to characterize the medium term. However, the above valuation metrics indicate that only modest expectations are baked into the price. Along with this downside protection, the stock's 3.87% dividend yield is a full percentage point higher than the average. For investors concerned about the impact of a recession on cyclical stocks, a nice dividend yield is an attractive option to deliver returns while waiting for the sector to turn around. There's no reason to get excited about this from the perspective of a growth story, but Nordstrom could be a nice play on stability and a cheap return to modest growth.