Acuity Brands (NYSE:AYI) plans to release first-quarter fiscal 2020 results on Thursday before the markets open. Shares of the industrial lighting and building controls manufacturer lagged the broader market last year, appreciating 20% in comparison to the S&P 500 index's gain of nearly 29%. That underperformance can be attributed in part to a lack of growth, as 2019 revenue of $3.7 billion was flat relative the prior year. Undoubtedly, investors are hoping for more lively top-line results in 2020. Before we see those results, let's review the company's guidance for the quarter, which ended Nov. 30, and also discuss why this manufacturing stock may experience volatile post-release price movement.

In its fiscal fourth-quarter 2019 earnings report, Acuity's management warned that it expected demand in the industrial lighting market to remain "sluggish" until global trade issues are resolved. The trade war and the tariffs that it features, coupled with the company's trend of generally flat revenue, set up a difficult comparison with the Q1 fiscal 2019, during which it notched year-over-year revenue growth of 11%.

Compounding this difficulty, management said it believed that sales might decline "in the mid-to-high single-digit percentage range" since part of the Q1 2019 sales jump resulted from customers pulling orders forward to get ahead of price increases that Acuity had announced to offset U.S. import tariffs. Management believes that significantly contributed to last year's Q1 sales increase, but it hasn't been able to quantify the effect. Thus, in the outlook shared last quarter, it stated that "...it is not possible to precisely know how this will impact this year's first-quarter results compared with the year-ago period."

Acuity also recently reduced exposure to certain products in its retail channel that are materially affected by tariffs; that move is expected to put further pressure on its sales figures. The company did assert that its sales decline will be somewhat mitigated by its September 2019 acquisition of The Luminaires Group, a provider of commercial-grade lighting products with annual revenue of roughly $100 million, but again, management didn't specify how much it anticipated The Luminaires Group might contribute to first-quarter sales.

All of that uncertainty around Acuity's top line means that performance above or below management's own forecast range may provoke an exaggerated reaction in the market, whether of relief or disappointment. In general, Acuity's stock has been a volatile performer over the last 12 months, particularly around earnings reports. Its beta coefficient of 1.53 means that it has been 53% more volatile than the broader market. 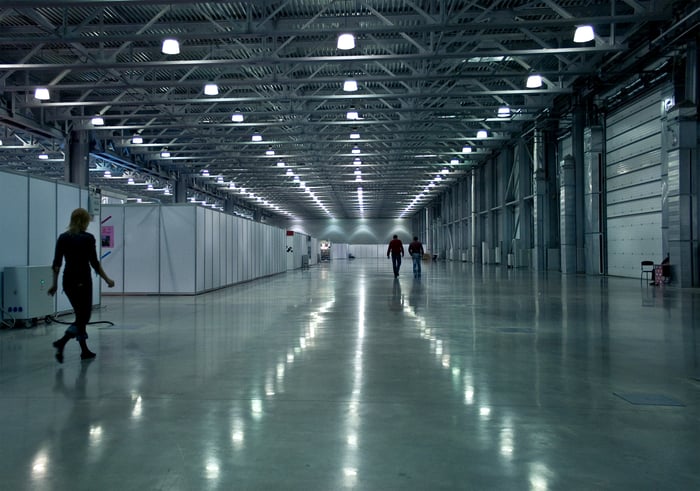 A potential offset to weak sales

During 2019, Acuity pushed a strategy of de-emphasizing lower-margin volume in favor of more profitable, tech-laden products that could increase its bottom line and solidify its customer relationships. The manufacturer exhibited some progress in this effort as the year drew to a close. As I discussed last quarter, while sales in fiscal Q4 2019 slipped by nearly 12% year over year, gross margin leaped 330 basis points to 42.1%, and adjusted operating margin rose 90 basis points to 15.6%.

While the company didn't provide any first-quarter target ranges for margins, it did say it intends to "increase margins by selling a richer mix of products and solutions" throughout 2020. Acuity continues to invest in profit optimization that should bear fruit over a longer time horizon.

In late November, it acquired privately held LocusLabs, creator of an indoor mapping and location platform for use in large buildings and campuses. LocusLabs' technology helps visitors use mobile apps to "easily search, explore and navigate large, complex indoor spaces."

Then in December, the organization announced a strategic partnership with privately held Circadian ZircLight, a provider of workplace lighting that automatically adjusts its spectra throughout the day and night to help workers maintain their circadian rhythms. Acuity is licensing Circadian ZircLight's technology and plans to incorporate it within its own branded indoor lighting lines in North America.

As Acuity builds a better margin profile and gradually nudges more of its sales volume away from commodity products and toward solutions-based lighting and controls packages, it should eventually deliver decent sales growth, though that won't necessarily happen this quarter. Regardless of results on Thursday, investors in manufacturing stocks may want to keep Acuity on their watch lists, as this stock investment has the potential to make up the ground it lost on the broader market in the coming quarters.