Zebra Technologies (NASDAQ:ZBRA) is starting the new year on a high note after seeing its market capitalization grow more than 60% in 2019.

After exciting investors with better-than-expected earnings and a lucrative U.S. Postal Service deal in 2019, the company is aiming to line up new contracts for its public safety mobile computing products, including "rugged" devices. The devices may have an early-mover advantage because they are already certified for use with FirstNet, a nationwide U.S. public safety network that has the potential to sign millions of new subscribers. It is worth asking if the company's expansion into public safety technology could be significant enough to drive share price even higher for this already-hot stock, and if the business segment is meaningful for those considering a long-term investment.

In 2017, AT&T (NYSE:T) was selected by The First Responder Network Authority of the United States, a government entity, to build a nationwide network that will connect first responders. The company will also operate that network under a 25-year contract.  About 75% of the buildout is complete, and construction has progressed ahead of schedule, AT&T Chief Financial Officer John Joseph Stephens said at an investor event on Dec. 3. 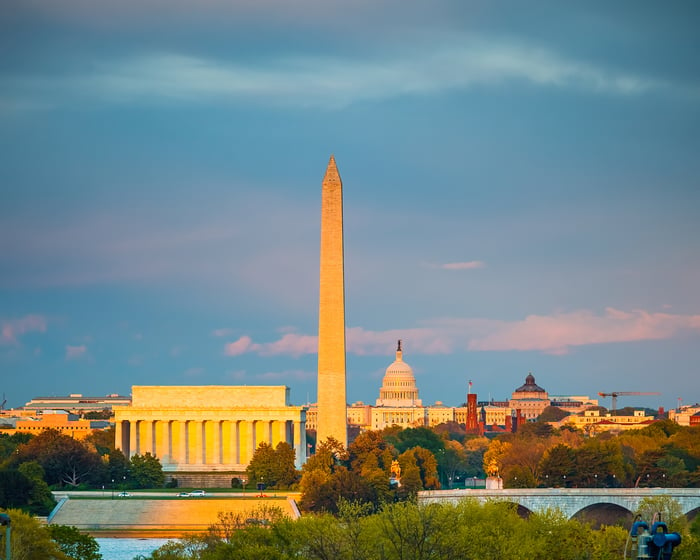 The National Mall in Washington, DC.

When the network is complete, FirstNet wireless coverage is expected to reach more than 99% percent of Americans. The network differs from traditional cellular service because its primary users, which will include law enforcement agencies, fire departments, and emergency medical services, will receive priority and preemption.

More than 10,000 public-safety agencies subscribed to FirstNet by early December, FirstNet said, representing over 1 million connections.  However, it's difficult to quantify the total addressable market for FirstNet -- and therefore Zebra -- due to the network's newness and a level of uncertainty about how signups will continue to play out. There are more than 2.7 million full-time law enforcement officers, firefighters, and emergency medical technicians in the U.S., according to the American Security Council, but data has not yet emerged on how many FirstNet-specific devices have been purchased by agencies that have subscribed to the service.

In addition to traditional emergency services workers, the network will be made available to agencies that may be called upon to help support first responders, particularly during and following natural disasters. Other municipal and state entities such as transit systems may also be eligible for service, and statistics do not take into account part-time workers.

How Zebra stands to benefit

So far, 163 devices have been certified by federal regulators as compatible with the FirstNet network. But not all have built-in support for Band 14, the communication spectrum set aside by the government specifically for FirstNet. Devices that are compatible but not specifically equipped for FirstNet will require a software update, a possible unlocking process, and installation of a FirstNet SIM card.

Zebra said in late October it has two mobile computers and four tablets that have been certified and approved for use on with FirstNet. The company will compete with certain smartphones and other products from manufacturers including Apple and NETGEAR, but not all its competitors manufacture "rugged" devices like those produced by Zebra. The company claims these devices are constructed with drop-resistant features that favor usage in environments such as motorcycle policing, incident response and disaster management. Pricing of the devices on an individual basis is not consistent online, and it is unclear what types of prices might be provided for large departments ordering many units at once.

On its Q3 earnings conference call, Zebra Chief Executive Officer Anders Gustafsson characterized the public safety market and FirstNet as "good incremental growth opportunities" for the company. "Those are several hundred-million-dollar markets that are, today, served predominantly by either very unique purpose-built devices or consumer devices," Gustafsson said. "And we believe that there is a good opportunity to introduce our type of solutions in that market."

Time to wait and watch

If an investor was not already considering buying Zebra, initial information on its potential to penetrate the public safety market is not substantial enough to tip a decision. However, if the company makes inroads with this segment as it did with the U.S. Postal Service, the activity may be worth watching. Prospective investors interested in the company's public safety revenue prospects would be wise to scour earnings reports for Q4 and beyond on both Zebra and AT&T as more details on FirstNet rollout, and who benefits, come to light.