One of the biggest surprises during Sunday night's Golden Globes ceremony came in the Best Animated Motion Picture category, where Disney (NYSE:DIS) and to a lesser extent Comcast's (NASDAQ:CMCSA) DreamWorks Animation were upset by Laika's Missing Link. Even director Chris Butler and producer Arianne Sutner seemed stunned as they struggled to find their way up to the stage, kicking off their acceptance speech by telling their peers that they were "flabbergasted" by the win.

A win is a win, and the welcome news for Laika -- nominated a couple of times in the past, but never a victor until Sunday night -- should help give Missing Link fresh legs in securing retail sales and digital distribution deals at this point. However, it doesn't seem likely that the the stop-motion animation film would've come out on top if it weren't for Disney putting up three contenders in the category this year. It was a bold bet by Disney to put up its three animated blockbusters for the award's contention, and with Comcast claiming the fourth slot, maybe it isn't a surprise that Laika came out on top as the lone indie nominee in the category. 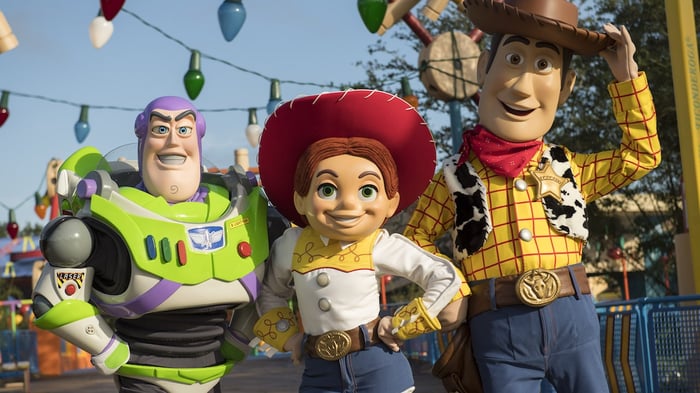 On the surface, it seems perfectly natural that Disney should have Toy Story 4, Frozen II, and the CGI-rebooted The Lion King as Golden Globes nominees. Disney had a monster year at the domestic multiplex, putting out all six of 2019's top-grossing films. Its three nominees were among the four top box-office draws for the year. Leaving one out of consideration for the coveted award could've sent the wrong message to the talent behind any of the three popular releases.

Rival Comcast didn't have a difficult choice to make. Its Universal Pictures studio arm didn't have a single film among the country's top 10 box office winners, and while it did put out a pair of animated sequels that generated roughly the same number of ticket sales, going with How to Train Your Dragon: The Hidden World over The Secret Life of Pets 2 was an easy decision. The former was approved by 90% of the critics tracked by reviews aggregator Rotten Tomatoes, unlike the latter's more pedestrian 59% success rate.

Missing Link didn't have the same kind of box-office success as its four other nominees, but that's never been the criteria for award accolades. Golden Globes voters go for quality over quantity, and this is where the story gets interesting. Let's go over the Rotten Tomatoes approval ratings by critics and audiences for all five of the nominees, throwing in the stateside box office tallies for good measure.

Going by the numbers it would seem as if this would be a slam dunk for Toy Story 4. The fourth and seemingly final installment in the franchise had the highest review scores among film critics and audiences. It was the country's third-highest grossing film of 2019, trailing only The Lion King in the animation category. Missing Link, on the other hand, commands just the third-highest score among professional film reviewers and is dead last with audiences in both recommendation percentages and ticket sales.

It's easy to see how this played out. Critics generally didn't buy into the photo-realistic animation of The Lion King, which was roughly a shot-for-shot recreation of the original 1994 film. Golden Globes voters don't necessarily have a thing against Disney's mainstream offerings, but with the three candidates likely splitting those votes -- and Comcast's DreamWorks Animation also muddled in as a big-name animation studio -- a well-crafted indie like Missing Link is a logical choice.

Disney will be just fine. It will continue to be one of the market's widely held growth stocks. All three of its nominated feature films are audience faves, and that will be more ammo for Disney+ when they all hit the hot streaming service later this year. It can afford to let Laika and Missing Link enjoy the Golden Globes win, even if it was likely a tactical blunder to not go all-in on Toy Story 4.