With all the bankruptcies and other ongoing negativity surrounding brick-and-mortar stores the last few years, sometimes it's easy to forget that digital has not, in fact, taken over. On the contrary, while e-commerce is still a double-digit growth industry, digital retail sales made up just 13% of total U.S. retail sales in 2019 (excluding gas stations) according to the U.S. Census Bureau. Let's remember that even Amazon has begun to view the physical store format as a viable option.

With all the negativity not exactly pairing with reality, I see value in commercial REITs (real estate investment trusts), which are one of my favorite ways to invest in retail right now. Specifically, STORE Capital (NYSE:STOR) and its 3.8% dividend yield has my attention.

STORE (an acronym for single tenant operational real estate) owns and invests in net lease properties with a single tenant, primarily in the service segment of the retail industry. There were 2,417 properties in the company's portfolio at the end of the third quarter of 2019 -- with an industry-topping 99.7% occupation rate -- with tenants including restaurants, furniture stores, early childhood education centers, gyms, and theaters.

As a net-lease REIT, STORE's tenants are typically responsible for paying property taxes, insurance, and maintenance, which helps create a more stable stream of income for STORE shareholders. Initial lease agreements are usually long-term (average remaining lease terms were about 14 years at end of Q3) and have built-in provisions for annual rent rate increases tied to the rate of U.S. inflation. The benefit to STORE's partners is they get access to capital to build the properties, leaving them cash to invest in their operations. Having gone public in late 2014, STORE has provided shareholders impressive returns thus far. Shares are up 87%, and the quarterly dividend has been raised by 40% in that time -- making for a total return of 136% since IPO.

Growth in the last year has continued, with the company investing in over 200 properties in the last year and increasing its profitability, as measured by adjusted funds from operations (or FFO, the equivalent of earnings for real estate).

It's important to remember that as a REIT that distributes most of its profits to investors via a dividend, STORE has to issue debt and new shares (the reason why FFO per share grew less than FFO in 2019), or sell existing properties (the reason net investment is lower this year compared with 2018 as some properties have been sold to acquire more lucrative ones) in order to expand. Management has done a great job with this balancing act. Debt-to-equity has actually fallen the last five years as properties have increased in value and new acquisitions have added to the overall value of the portfolio. As a result, debt-to-equity of 0.38 is one of the lowest among retail REITS. 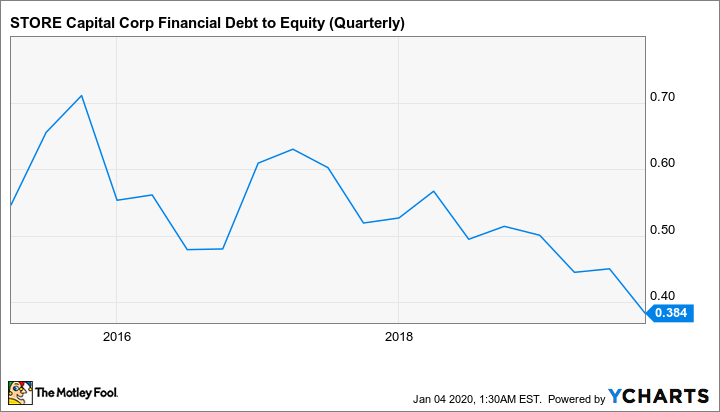 Net acquisitions for 2020 are expected to be $1.2 billion, roughly a 14% increase from the value of the current real estate portfolio. That should equate to a nice bump next year in revenue and FFO. New leases in Q3 were 17 years long on average as well. That also adds to the stability of the REIT's future cash flows and further dividend increases.

On top of all this, STORE shares are down 10% in price the last few months, last peaking right after the company raised another $508 million from selling high-grade debt to fuel further expansion. So, a discount for no real reason. Simply put, pullbacks like this are great times to add to winning positions. I like STORE's strategy, and the outlook for the year ahead and beyond looks particularly good for this retail investment.