The maker of rugged outdoor gear invests in innovation to gain a competitive edge.

In Austin, Texas, robots zip zippers thousands of times. Hydraulic presses crush cups under tens of thousands of pounds of pressure. It's a chamber of horrors for consumer products, and their suffering is in the name of sales.

Research and development are the engines that keep YETI (YETI 1.82%) running ahead of the pack. The company's dedication to innovation is a serious component of its culture. That's why it spent upwards of $1.75 million to renovate a 20,000-square-foot facility in Texas's capital city to put products through their paces, according to the Austin Business Journal. Keeping ahead of the growing competition is a multimillion-dollar enterprise for a company that uses innovation as its calling card. 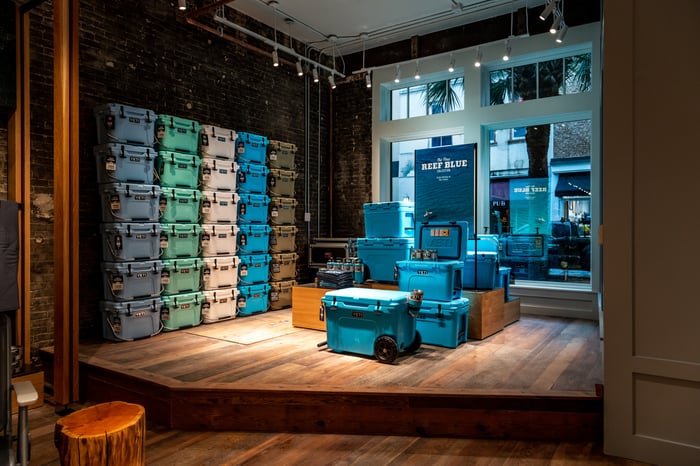 YETI displays its rotomolded coolers in one of its retail stores. Image source: YETI.

Time to torture the Tundras

Products like the rotationally molded, or "rotomolded," flagship Tundra coolers are built for a lifetime of use and abuse. The rotomolding process enables YETI to manufacture coolers with uniform wall thickness to increase insulation and keep ice longer. It's a niche production for a niche product.

But who's got the time to wait a lifetime to see whether they hold up? In YETI's super-secure Innovation Center, Tundra coolers and other products are subjected to months of Florida Everglades-level humidity, ultraviolet light, and temperature extremes from 30 below zero to 140 degrees Fahrenheit for months at a time to simulate years of use out in the wild.

A 10-person product development team works behind one-way glass windows, hiding millions of dollars' worth of high-tech equipment to prod, poke, and pummel the YETI product line to the point of failure and beyond, all to make the next-generation cooler, tumbler, or camp chair better. In all, some 54 engineers, product designers, and category managers use cutting-edge technology like 3D printers and laser lathes to take YETI products from idea to launch.

The proof is with the pros

A key to YETI's ongoing success is its disciplined, stage-gate product development process that is designed to provide consistent quality control while optimizing speed-to-market for its catalog of products.

To help ensure that YETI's new products are going to be a hit, YETI Ambassadors -- a diverse, professional group of men and women anglers, hunters, rodeo cowboys, barbecue pitmasters, surfers, and outdoor adventurers -- test prototypes and provide feedback that is built into the final product designs. Tundra torture tests reveal weaknesses, and the pros advise on the practical part of YETI's products, like how handles should feel or how straps should hang, the placement of bag zippers, or what type of lid is best for a tumbler, among other ergonomic details.

Sometimes these campfire-side chats with the ambassadors evolve into new products entirely, like the new Panga duffel bag. People were using the soft-sided Hopper insulated cooler as a stout tote bag. Instead of making an uninsulated Hopper, YETI designed the Panga from scratch, creating a unique product for unique needs. In fact, the Panga and the LoadOut bucket -- a five-gallon, 5.8-pound uninsulated carry-all -- were the first products birthed in the Innovation Center.

For a company like YETI, surviving in the hyper-competitive sporting goods and outdoors market means developing and shipping unique products. But the questions are: How many insulated tumblers and coolers and camping chairs can exist in the universe? How does it create a better mousetrap to dominate a marketplace full of mousetraps? And if YETI builds a cooler to end all coolers, why would you ever need to buy a new cooler?

The company is banking on YETI's cool factor, as seen in its "Limited Edition Pre-Dawn Collection" of black-on-black soft coolers and carry-all bags. Driving demand -- real or manufactured -- is the challenge companies in YETI's sector face, and that's why facilities like the YETI Innovation Center exist. Anything that gives it an advantage is, well ... advantageous.

Year-to-year spending on innovation from 2017 to 2018 increased by 23%. YETI hasn't released the 2019 metrics yet, but it should in the next few weeks. According to YETI Investor Relations, given its planned product pipeline for the next three years, investors can expect the company to spend similar amounts on innovation going forward.

YETI says it views itself as more than a "cooler company" or a "drinkware company." With all its marketing efforts and tie-ins to the adventurer crowd, YETI presents itself as not just a lifestyle brand, but a lifestyle itself.

With its investment in innovation and its determination to bring products to market only when they are innovative, YETI is an investment to keep your eye on -- especially in the next three years as its R&D roadmap unfolds.