Yeti Holdings (NYSE:YETI) is known as a premium brand for coolers, bags, apparel, and drinkware such as tumblers, mugs, and bottles. These products are sturdy and reliable, helping food and drinks retain temperature for long periods. They are especially active in the sporting community. Approximately 60% of total sales are through wholesale channels, with the balance being direct to consumers via the company's e-commerce platform and a handful of physical retail locations.

The consumer discretionary stock began trading in October 2018 with an $18 initial public offering, and shares moved downward from there almost immediately. Shares ascended steeply in 2019, rising to nearly $36 in April, but it has been up and down since then.

Yeti has certainly produced strong fundamental results. Its annual revenue growth has been averaging more than 18%, which is impressive for a company with a diverse product line across established consumer categories. These coolers and tumblers improve upon the existing alternatives, and there is a strong brand behind them. But this growth is achieved without delivering a truly disruptive new technology or service.

Yeti achieved a 51.4% gross margin and a 13.5% operating margin. Newell Brands (NYSE:NWL), which is a more diversified consumer goods company that directly competes across certain categories with Coleman brand coolers and outdoor products, has experienced falling sales, a 35.6% gross margin, and a 9.8% operating margin, despite operating at 10 times the scale of Yeti. This clearly indicates the premium brand's superior pricing power and operational efficiency. The company's resulting 24.1% return on invested capital underlines this efficiency, outpacing the industry average by more than 10 percentage points. 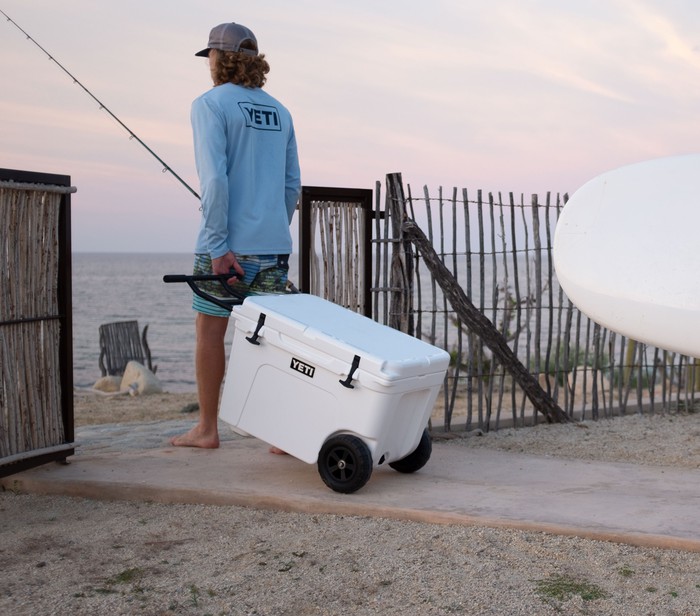 Analysts are forecasting continued strong growth, with consensus estimates calling for more than a 13% sales expansion next year. It would appear that good times are set to continue for the foreseeable future.

The downside risks here are apparent

Investors are forced to pay a premium to own Yeti stock. The stock trades at 24.7 times adjusted forward earnings, with a PEG ratio of 1.9. The industry average forward P/E is close to 17, and alternatives like Newell can be owned for only 12.7 on an unadjusted basis. Yeti's 21.8 EV/EBITDA ratio is nearly double the average figure for the travel and leisure and consumer packaged goods industries. Its 74.8 price-to-free-cash-flow ratio similarly indicates an expensive valuation. It is common for higher growth names to attract more bullish pricing because these are the companies that are likely to deliver higher financial returns in the future. But it is important to have a quantitative view of the pricing in context.

Yeti's growth outlook is much better than most of its industry peers. But investors can look at other sectors and industries to find stocks with superior upside potential at similar valuations. Alternatively, Yeti is subject to all the same macro forces as its competitors, so even a bet on the company's outperformance could be jeopardized by factors beyond its control. With more bullish valuations, Yeti provides much less cushion to the downside.

The company is exposed to trade wars and tariffs on Chinese imports. While it would appear that risks in this lane have abated for the moment with a new trade deal, this could always cause fundamental problems moving forward. Yeti also maintains a high price point, and premium leisure products are typically among the hardest-hit during recessions, so the next cyclical downturn could wreak havoc on cash flows. Compounding this issue, Yeti is heavily reliant on holiday season sales. That fundamental top-line weakness may not be apparent until Q4 results are released any year, leading to a more volatile reaction to financial information.

Yeti has done well and deserves credit for its performance and brand strength. It is no surprise that the stock garners bullish valuation as a result, but there are clear threats to the bull narrative. Investors should consider the role that a company with these fundamentals plays in a portfolio, and compare these to comparable alternatives.