Tesla (NASDAQ:TSLA) has been on an absolute tear over the past few months, a rally that started in earnest when the electric-car maker reported a $143 million profit in the third quarter. Tesla's Shanghai Gigafactory made its first Model 3 deliveries to employees at the end of 2019, and management just laid out plans for Model Y production there, which added to the momentum (CEO Elon Musk's Steve Ballmer-esque dance moves notwithstanding). The stock price surge has now pushed Tesla's total market cap to approximately $89 billion -- more than GM's and Ford's market caps combined. 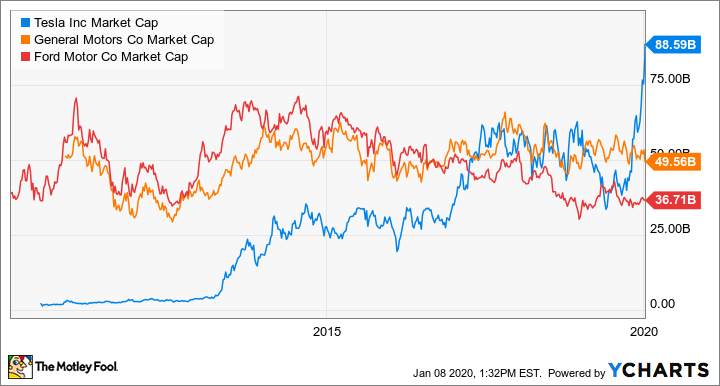 Some of the earlier gains were driven by short-sellers, who have been covering their positions since June, according to S3 Partners' Ihor Dusaniwsky, who specializes in short-selling analytics. Still, the result has been to put the first valuation milestone for Musk's 2018 compensation package within reach.

Driving toward a 12-digit market cap

Tesla shareholders approved a controversial pay package for Musk in 2018 -- it's worth billions upon billions of dollars to him, but only if the company hits a series of specific milestones. The compensation agreement was modeled on his prior packages with the company.

The subsequent milestones come in increments of $50 billion, which means that Tesla's total valuation would have to reach a mind-boggling $650 billion for all of the tranches to vest. In addition to reaching its market cap milestones, there are 16 operational milestones related to revenue and adjusted EBITDA, with the only adjustment to the latter metric being to exclude stock-based compensation. They are:

So, even if Tesla's valuation hits $100 billion in the coming weeks or months, in order for Musk to pocket his first tranche, the automaker would need to also hit either the revenue or adjusted EBITDA milestone. Here's where Tesla stood on those fronts as of the third quarter.

Even before adjusting to exclude stock-based compensation from EBITDA, Tesla notes in regulatory filings that it has already exceeded both targets: "As of September 30, 2019, two operational milestones have been achieved: (i) $20.0 billion total annualized revenue and (ii) $1.5 billion annualized adjusted EBITDA, each subject to the formal certification by our Board of Directors, while no market capitalization milestones have been achieved."

Additionally, Tesla now considers it "probable" that it will reach the $3 billion adjusted EBITDA milestone, which means Tesla will begin to recognize the associated stock-based compensation expense ratably. In other words, if Tesla's market cap hits $100 billion, Musk will be due for a hefty payday.