The third quarter of 2019 was another bleak one for the struggling company, but the CEO laid out a plan for future growth. Here are some of the highlights.

When you're so low, the only way to go is up

At least that's what managers and investors are hoping. If nothing had changed, the company would still be in an emergency. This quarter marked the 11th consecutive quarter of declines for Bed Bath & Beyond (NASDAQ:BBBY), and a net loss of $0.31 per share represented a significant reversal from the prior-year period's $0.18 of earnings. Those weak results were accompanied by a management shake-up in late 2019 that only added to the uncertainty for shareholders. 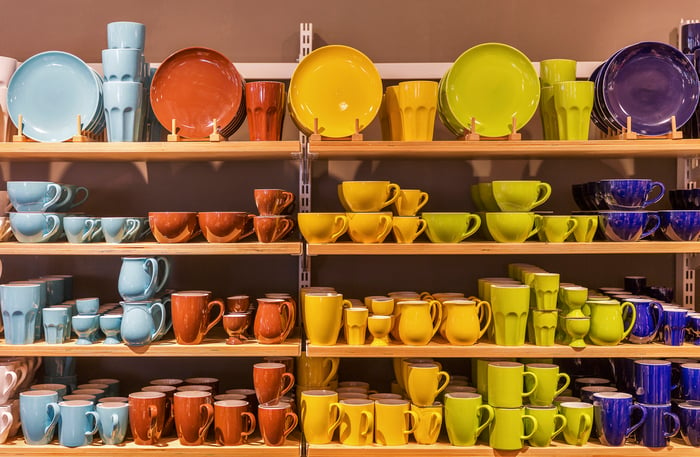 According to research the company quoted, 79% of customers have a favorable impression of the company, and 75% want to shop there. It's also the top home-goods company for brand recognition.

Bed Bath & Beyond is in a unique position: People really like the company, but revenue is falling. That's a silver lining, because it implies that the challenges the company is facing are less a brand problem and have more to do with poor management. With new and capable management sitting at the table, a turnaround, though difficult, should be eminently achievable.

One bright spot in the third-quarter numbers was that adjusted comps for the five-day Black Friday period from Thanksgiving through Cyber Monday increased 5% in stores and 13% in digital. With the right plan, new CEO Mark Tritton and his team could gear up to lead the company to a real resurgence.

There are always more opportunities than meets the eye

Tritton mentioned a variety of ways Bed Bath & Beyond could improve future sales as well as increase efficiency from the inside out. The meat of the turnaround plan is a process that Tritton called the "five pillars," and it runs the gamut of operations:

Specifically, he mentioned a slew of minor goals on the way to reaching these objectives. One in particular is "harvesting our own brand opportunities," something that has been extremely successful at Target (NYSE:TGT), where Tritton was merchandising chief prior to landing at Bed Bath & Beyond.

In fact, a lot of this sounds like another Target makeover. That company completed its own turnaround in 2017 that has propelled it into a position as one of the best-performing retail chains in the U.S. and a top stock. It's not for nothing that the activist investors who unseated the previous CEO had their eyes on Tritton. Target's script is definitely a good one for Bed Bath & Beyond to follow, as the company functions in a similar capacity: a huge product assortment with high name-recognition at mass pricing.

Some of the other opportunities the company is working on include selling off real estate to fund the changes, the first portion of which already went through earlier this year, in addition to reworking the Beyond Plus loyalty program, which awards customers with 20% off every single purchase and free shipping for an annual fee of $29.

The company has what it takes

This is as good a starting point as the company will get, because it now has the flexibility make the changes it needs to restart.

While this was a poor quarter, and management made no effort to hide that, the company has some compelling opportunities as it moves forward. I, for one, will be excited to watch Bed Bath & Beyond's next chapter unfold.