Just when it looks like the cord-cutting might start to ease up, cable companies are being presented with a new challenge. Television antennas and the free, ad-supported broadcasts they deliver are starting a mini-comeback. They may gain even more now that the Advanced Television Systems Committee (ATSC) has formally adopted ATSC 3.0 as the official broadcast standard. The 3.0 version can handle the 4K Ultra HDTV video that's made several streaming services such a hit with consumers.

It's not a reason for cable companies like Comcast (NASDAQ:CMCSA) or Charter Communications (NASDAQ:CHTR) to go into panic mode. They've been dealing with the increased loss of subscribers since 2013 when alternatives like Netflix and Disney's Hulu finally became reasonably viable alternatives.

This is just an added hit to an already breaking industry. The real question is whether another alternative to rising monthly cable bills may be what pushes subscribers past the breaking point. 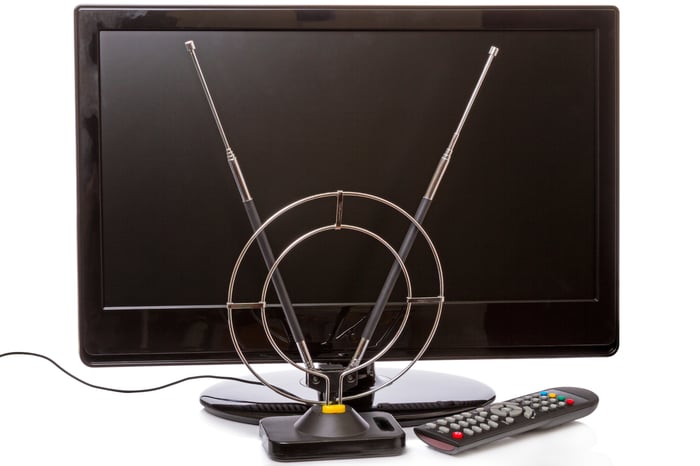 Maybe commercials aren't so bad after all

The cable business had gotten some decent news last year. With multiple streaming options available to them, consumers finally began to compare the relative value of each. A survey taken by PCMag.com suggested the average watcher was unwilling to spend more than $33 per month on streaming video, jibing with a more recent survey from The Trade Desk that says most consumers would prefer to pay something closer to $20 per month. Perhaps they'd start choosing one over another rather than subscribing to them all. Some cable names are developing their own streaming services anyway, keeping a few of the would-be cord-cutters around with what's more or less the oft-discussed skinny bundle.

It's another nuance of that survey, however, that's particularly noteworthy. Those same consumers report they're actually willing to tolerate a few commercials if it also means a lower monthly bill.

That's the direction Comcast is heading, though it would be more accurate to say its NBCUniversal arm is working toward that goal. Its planned streaming service, Peacock, slated for launch in the first half of this year will be available on an ad-subsidized basis, if not wholly supported by television commercials.

If commercial-supported broadcasts are back en vogue though, then so are the airwave broadcasts that fell out of favor in the '70s when cable television cemented itself as the new norm.

Dust off that antenna

Don't laugh. If you're not following or watching the rekindling of antenna-based free television, it's bigger and better than you might have imagined it could be four decades ago. On average, cord-cutters have access to about 50 free television channels, and 90% of the U.S. population lives within reach of at least one ATSC 3.0/aerial broadcast. Some of that programming is lame, but some of it isn't, and with the average person able to access at least a few of these stations, they find there's enough free content out there to round out the streaming video service 59% of these households say they also subscribe to.

As for raw numbers, there still aren't a whole lot. Nielsen reckons there are at least 16 million homes in the United States that have chosen the over-the-air (OTA) option. It's a number that's been growing fast though, and it's certainly a notable figure compared to the 83 million cable customers that eMarketer believes will still be paying a monthly bill by the end of this year.

That's especially significant given that the cord-cutting movement is one that studios are no longer ignoring. Sony (NYSE:SONY), for instance, recently committed some of its premium content to OTA television network GetTV, including top franchises like Ghostbusters and Men In Black. It's not a bad move though, considering the ad-supported GetTV is viewable in 85 markets and accessible by 80% of the United States' television watchers.

It's also a nice step up in credibility for OTA television, as will be the ability to watch free aerial broadcasts in 4K clarity, along with some OTA improvements a handful of tech companies have introduced. The lowered, now-below-$100 cost of some OTA tuners that double as a streaming player and a DVR will give consumers even more affordable functionality with aerial antennas.

One alternative too many

It's a slow movement, and it's one Comcast, Charter, and their peers have time to respond to ... if they choose to respond. The re-advent of OTA certainly isn't going to entirely bring down the cable television industry by itself either. There's just some content no amount of advertising can fully support on its own. Sports is expensive to air, and movies that feature marquee actors aren't cheap either. Subscription fees will still have to subsidize cable companies' purchase of that entertainment.

If consumers have decided they're willing to suffer a few commercials to receive entertainment though, aerial broadcasts are almost as marketable as ad-supported streaming video is. The only thing missing is an on-demand option, although a DVR option will help grind down that stumbling block too. Certainly, between the entrenched streaming alternatives like Netflix and improving over-the-air video choices like GetTV, the fragile cable industry still has much to worry about.