Money may not guarantee happiness, but not having enough generally means your life will be stressful. It's possible to live a modest, happy life without a ton of money, but if you can't make ends meet, you will almost certainly be unhappy.

There's an easy answer to that. Make more money in 2020. That may sound difficult, but it's actually easier than you think if you focus on your own bottom line. Here are four ways you can make money in 2020. Whether you use the cash to cover current needs, save for retirement, pay down debt, or save for a rainy day, each of these methods should put more cash in your pocket. 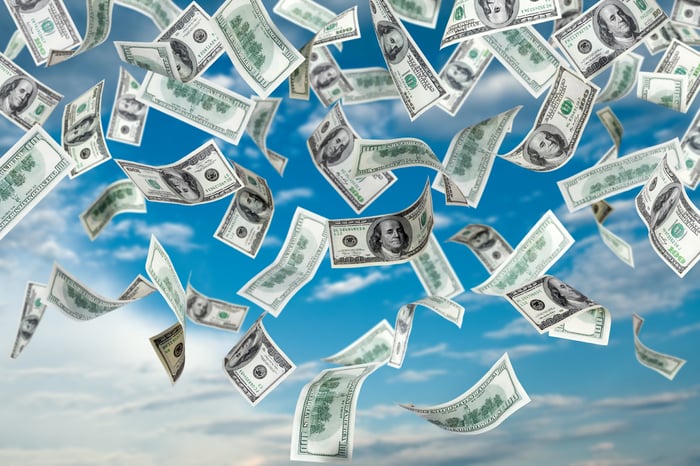 It's possible to make it rain in 2020. Image source: Getty Images.

If you already have a job, the easiest way to make more money is to get paid more for what you already do. Sometimes, that's as simple as asking your boss for a raise. You ask for a meeting, explain in detail why you are worth more to the company, and your employer agrees.

That, of course, is rarely how it happens. You should ask for a meeting and ask for a raise. You should also be prepared to ask what you can do to earn more money and to agree to do that work, then return to your boss to discuss additional compensation in a few months.

Come in with a plan, but be open to negotiation. You probably won't get handed a raise, but you're likely to come out of the meeting with a road map for getting there.

One of the big edges you have in asking for a raise is that unemployment sits at near-historic lows (3.5% in the latest report from the U.S. Labor Department). There are also roughly 6 million open jobs, according to a recent Glassdoor report, and your company may be willing to pay you more to not have to fill your position.

The gig economy has made it easier to do work as you need money. Sometimes that can mean leveraging your hobby into a side gig. Maybe you make things that can be sold online, or perhaps you're trained in something like copy editing or fact-checking that's in heavy demand as a side job.

You can also take on an extra job driving for a ride-share service or something else that you have the skills and equipment to do. The best part of these "side hustle" jobs is that they're generally short-term -- you can work as needed to make some extra cash.

The gig economy currently stands at $204 billion globally, according to a recent report from Mastercard. It's expected to grow to $455 billion by 2023, which suggests that there's a growing demand for these type of workers.

3. Take on a traditional second job

Unemployment sits at near-record-low levels. That's good for anyone looking for a job, and it's beneficial to anyone looking for a second job. Many employers are being very flexible when it comes to people taking on a second position. They might be more willing to work with part-time employees on hours and to generally bend to accommodate people willing to take on an extra job.

Retailers have been struggling to fill open positions. Some, including home improvement chain Lowe's, have made it clear they intend to hire seasonal workers on a temporary basis. Others simply have job openings and they may be more flexible than usual because of the high number of open jobs.

The strong job market also makes it possible to get a better job. In some cases, it's possible to make a lateral move and simply get paid more.

Sometimes, however, it takes moving up to get paid more. Companies may be casting a wider net when it comes to hiring because they have to. That may mean that a position that you're not entirely qualified for may be possible.

To make that happen, you should identify the skills needed to advance in your chosen profession. Even if you don't have those skills, making a plan to learn them could be enough to convince a company to hire you.

Be open to all ideas

Knowing you need more money is a starting point; it's important to figure out the most productive path to get there. This isn't always a short-term decision.

Look at what jobs are in demand and figure out whether you can pivot to a field that pays more money. It may be practical to get a Commercial Drivers License to drive trucks (a field with high demand) but less practical to get an advanced degree in robotics (another growing area).

A side hustle, for example, may be the quickest solution to making cash immediately. Getting a promotion, however, might make more sense in the long term when it comes to earning more without having to work a lot more hours.