Shares of ASML Holding (NASDAQ:ASML) shot up 92.3% in 2019, according to data from S&P Global Market Intelligence. Usually, stocks that nearly double within one year -- especially ones as large as ASML, at a $126 billion market capitalization -- need to have everything go right for them. That was the case in 2019, as the technology and semiconductor sectors rebounded, ASML executed extremely well, and investor sentiment surged.

Specifically, ASML is the sole provider of a unique technology that should be very important to the chip industry for years to come. 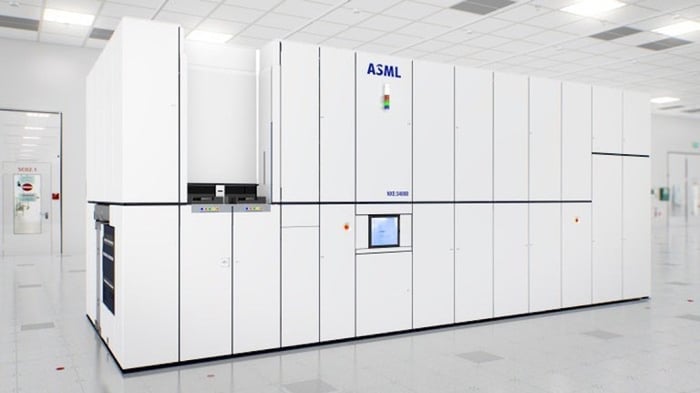 Of course, one reason ASML had such a banner year was because it had come into the year with such low expectations. In late 2018, the entire chip sector was in a tailspin, as rising interest rates and the intensifying U.S.-China trade war sparked fears of a coming recession.

However, during 2019, the Federal Reserve stopped hiking interest rates and even began lowering them, and U.S.-China relations, while bumpy, thawed throughout the back half of the year. But the real boost to ASML and its semiconductor equipment peers came from much-stronger-than-expected demand for leading-edge chips for 5G handsets and base stations. In response, Taiwan Semiconductor Manufacturing (NYSE:TSM), the largest global foundry for leading-edge chips, hiked its capital expenditures by a whopping 40% compared with expectations at the beginning of the year.

That means many more purchases of ASML's equipment, especially its extreme ultraviolet deposition (EUV) machines. EUV technology helps foundries produce smaller and smaller chips, with the ability to etch semiconductor wafers with extremely thin light, thereby cutting out many steps of traditional DUV etching. Because of the difficulty in bringing this technology to market, ASML is the only provider of this technology, and sells its EUV machines for roughly $125 million per unit.

Customers are clamoring for 7nm chips, as well as 5nm chips to come in 2020. Given the hot competition among vendors to make the best 5G phones, as well as increasing adoption of high-performance computing for artificial intelligence applications, it seems like the good times should continue for ASML -- though perhaps not quite as good as the banner 2019.

Memory companies are also exploring EUV for DRAM production, though that is currently in the test phase. Should memory makers rapidly take up EUV lithography, it could add another tailwind to an already favorable outlook for ASML going forward.