Investing legend Peter Lynch once wrote that individual investors can beat the market if you "invest in what you know." That adage is certainly true for certain household name brands, and proof that one doesn't necessarily need to put all their money behind a high-flying technology stock to get market-beating returns. In fact, if you happen to use a certain product or service day in and day out -- and love using it -- chances are, it's going to be a winning stock over time.

Don't believe me? Check out these two widely known, extremely popular consumer brands that have successfully turned $250 (or less) into $1 million (or more!). 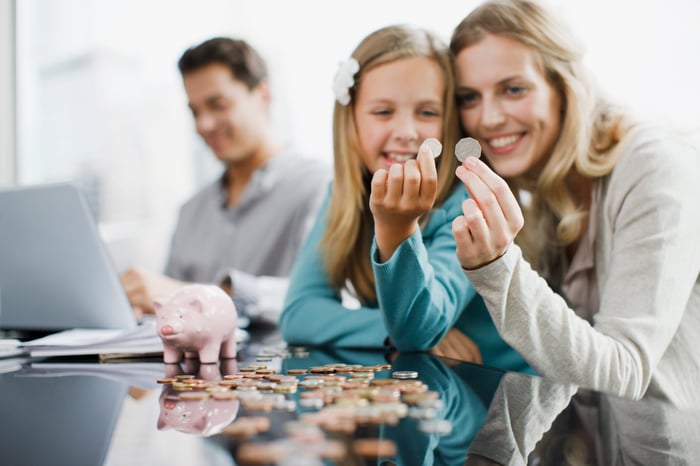 These household names have made investors a fortune. Image source: Getty Images.

Founded by Walt Disney and his brother Roy in 1923, Disney hit cartoon gold with the first Mickey Mouse short Steamboat Willie in 1929, followed by the company's first feature-length film, Snow White and the Seven Dwarfs, in 1937. From then on, Disney was off to the races, solidifying itself as the leading children's storytelling brand.

But a single media product alone can't generate the kind of 4,000-fold returns we are talking about, and Disney soon found other avenues through which to exploit its storytelling brand. Most notably, the company launched itself into the theme park business in 1971, with the opening of Walt Disney World. What may surprise some people is that the parks and resorts division was the highest-revenue-generating segment of the Disney empire over the first nine months of 2019.

However, the biggest profit center for Disney is its cable television networks, which spans the Disney Channel, ABC, and, most importantly, ESPN, the self-proclaimed worldwide leader in sports. Disney acquired ABC/Capital Cities -- and ESPN along with it -- in 1995 under then-CEO Michael Eisner, the first of several savvy acquisitions that catapulted Disney into a 21st-century media conglomerate.

Then in the 2000s, current CEO Bob Iger made another consequential series of acquisitions, bringing in Pixar, Marvel, and Lucasfilm (the home of Star Wars) under the Disney umbrella. These moves proved a masterstroke, as branded entertainment with well-known intellectual property has been the dominant-performing type of film content of the past decade.

Finally, Disney bought the TV and film assets from Fox (NASDAQ:FOX)  just last year, giving the company majority control of streaming service Hulu, and giving Disney the heft to take on Netflix (NASDAQ:NFLX) and others in the streaming wars.

How much have Disney shareholders made over time? Though the company was founded in the 1920s, Disney didn't go public until 1957, selling shares to the public at $13.88 per share. Since 1957, Disney has split its stock six times, splitting 2-for-1 three times, 3-for -1 one time, and 4-for-1 two times. Therefore, one share of stock at the IPO has been split into 384 shares. That means if you had invested just $250, your initial 18 shares would have turned into 6,912 shares. Using a current stock price of $145, that $250 investment would be worth just over $1 million today. And that's not even including Disney's dividends. Currently, Disney pays out $1.76 annually, adding $12,162.12 every year on top of an investor's stock gains.

As Disney has long been the go-to brand for children's storytelling, Walmart (NYSE:WMT) has been synonymous with low prices. Founded by Sam Walton in 1962 as a single store in Bentonville, Arkansas, Walmart expanded outside the state by 1968 and then sold shares to the public in 1970 at just $16.50 per share, to fund its continued expansion.

Walmart's corporate value is to offer customers the ability to "save money, live better," and it has stayed true to that ethos throughout its evolution. Walmart's initial success may be attributed to its having offered low enough prices to customers in rural areas, whom many larger national retailers ignored, thinking they wouldn't make for profitable business. However, once Walmart cracked the code on cost-conscious rural consumers, it aggressively expanded outside the U.S. Southeast and across the country, undercutting other retailers with its commitment to low prices.

Walmart's success can also be attributed to its willingness to experiment and evolve, all while sticking to its core low-price ethos. The company opened the Sam's Club warehouse format in 1983, followed in 1988 by the first Walmart Supercenter, which combined general merchandise with a full grocery store. Today, Walmart is the largest grocer in the U.S., with 22% market share, according to analysts.

Fast-forward to today, and current CEO Doug McMillon has been investing aggressively to take on the threat of e-commerce, buying Jet.com in 2016, offering two-day shipping in 2017, and even changing the corporate name from Wal-Mart Stores to just plain Walmart in 2018 to de-emphasize its physical stores. While technology disruption is a concern for sure, investors are applauding Walmart's efforts to expand its e-commerce abilities, with shares up 24% over the past year.

How well have Walmart's shareholders fared over the years? The stock has split 2-for-1 11 times, meaning that for each share bought at its IPO, an investor would have 2,048 shares today. Purchasing $250 worth of stock back in 1970 would have gotten an investor roughly 15 shares. Today, that would have been split into 30,720 shares worth some $3.6 million.

That's a shocking return on an investment, more than tripling the performance of Disney, and also not including dividends. Walmart's current dividend is $2.12 per share, meaning not only would that initial $250 have earned you a fortune, but it would also entitle you to receive $65,126 in dividend payments this year alone.

What's the secret to a world-beating consumer brand?

What did both Disney and Walmart do right? In my mind, both had a clear brand value proposition that appeals to an extremely wide swath of people, and both relentlessly executed on that brand promise over and over again. For Disney, it has always stayed true to its promise of inspiring young people to go on adventures, be a force for good, and survive life's challenges outside their parents' homes. For Walmart, having a commitment to the lowest price and highest convenience was a universal principle that appealed to almost all consumers. By standing for a promise and consistently delivering on that promise many times over with excellent execution, both companies have turned very small investments into huge fortunes over the past 50 years.

If you're looking at a younger consumer brand with the hopes it could set you up for retirement years down the road, ask yourself if the company has a solid, widely appealing brand promise, and if management can execute on the promise for years and years to come.