Ventas (NYSE:VTR) is one of the largest players in the healthcare real estate investment trust (REIT) space. It has a long history of executing well, with its CEO often receiving awards for her management skills. But it has stumbled lately, which management believes is just a temporary supply/demand mismatch. There's no particular reason to worry, except Ventas just chose to stand pat on its dividend. That breaks with recent history. What's going on?

In five of the six years leading up to 2019, Ventas increased its dividend in the fourth quarter. The one year that it didn't do this included a spin off, so that year is something of an anomaly. Investors have come to expect a dividend hike at the end of the year. It didn't happen in 2019. Ventas kept the dividend static at $0.7925 per share per quarter. If it doesn't increase the dividend at least once in 2020, the company's nine-year streak of annual increases will come to an end. 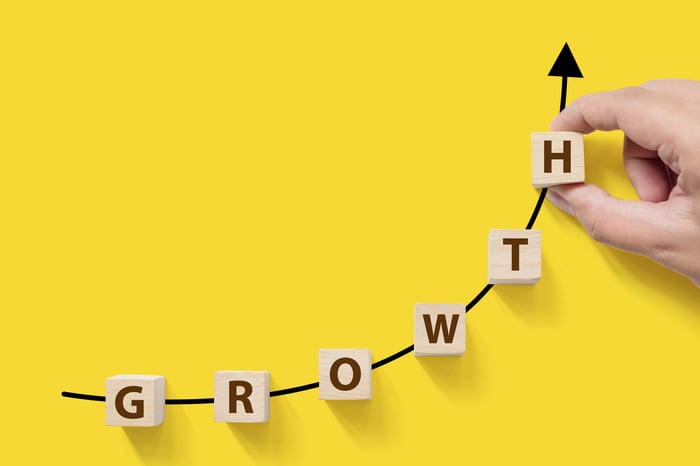 Here's the thing: Welltower (NYSE:WELL), one of Ventas' largest competitors, let its much longer streak of annual increases die not too long ago. Welltower hasn't increased its dividend for three years, with the last hike taking place at the start of 2017. Welltower, for reference, is considered one of the best-run REITs in the healthcare niche. Healthpeak Properties (NYSE:PEAK), formerly known as HCP, the other big name in the space, hasn't increased its dividend since 2017, as well, following the spin off of its nursing home business (which resulted in a reduced dividend payment to Healthpeak investors).

The lack of dividend growth at Welltower and Healthpeak was a selling point for Ventas. Although dividend growth in recent years hasn't been huge, hovering around the long-term rate of inflation growth over the trailing three- and five-year periods, it is much better than no growth at all. In fact, the buying power of a dividend that isn't increased over time will slowly get eroded by rising prices. That Ventas has chosen to stand pat on the dividend is a big deal.

Despite the industry accolades, Ventas stumbled badly in 2019. It entered the year calling for a pickup in growth in 2020, but ended it by saying that the growth it expected wouldn't show up until 2021 or later. Investors were not pleased, pushing the REIT lower on the news. It has notably underperformed its two closest peers over the past year. 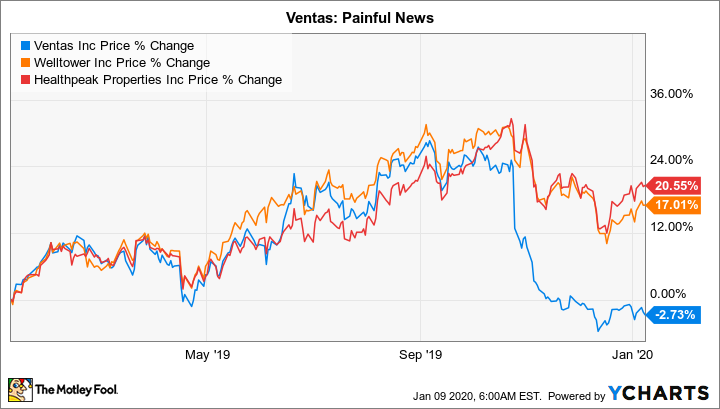 A big piece of the problem is self-inflicted. Rule changes have allowed healthcare REITs to own and operate some properties (the REITs actually hire an operator; the big difference is that they do not lease the properties out). That allows the performance of these assets, called senior housing operating properties (SHOP), to flow through to the top and bottom line. When times are good, that boosts performance. When times aren't so good, it's a drag. Ventas' SHOP portfolio has struggled lately. It's not alone in that: Healthpeak's SHOP portfolio has also been weak. But Welltower's has not; it's still doing quite well. So Ventas took on the extra risk of a SHOP portfolio and didn't execute well.

Adding to the concern here is that Ventas wasn't overly responsive to analyst requests for additional clarity on 2020. The party line was that such information would be given as normal on the fourth quarter conference call. If the REIT hadn't so obviously stumbled, that would be an acceptable response. Worse, based on its implied outlook for the fourth quarter of 2019, 2020 could be a tough year. To put some numbers on that, through the first nine months of 2019 normalized funds from operations (FFO) was $2.92 per share. The REIT's guidance for the full year is $3.83 per share. A little subtraction shows that normalized FFO in the fourth quarter is expected to be around $0.91 per share.

If you assume that roughly $0.90 is a run rate for 2020, full year normalized FFO comes in at around $3.60 a share next year. That's a sizable drop from 2019. And it would push the normalized FFO payout ratio up to nearly 90%. That's pretty high for a healthcare REIT and doesn't leave a lot of room for further problems in the SHOP portfolio. So it is understandable that the dividend would be held static. Note that Welltower and Healthpeak are both likely to have payout ratios around the 85% range in 2019. Ventas isn't wildly out of line with peers, but with the information available today, it is understandable that investors would be concerned about the dividend.

The positive spin here is that the properties in the SHOP portfolio are getting hit by the lingering effect of a construction boom that has largely tapered off. Ventas reports that new construction is at a nine-year low. Equally important, the REIT also says that customer demand remains high. So it looks like a temporary supply/demand imbalance that just needs time to correct itself. If that's the case, then Ventas, with a price-to-normalized FFO ratio of around 15 (using the 2020 FFO projection from above) and a dividend yield of 5.5%, looks like a relatively good deal. Welltower is currently trading with a yield of 4.5% and a price-to-FFO ratio of roughly 20, based on 2019 expectations. The problem is that, without more guidance, it's hard to tell if Ventas is worth the risk, since recently weak performance could also be the start of a longer and more negative trend. Long-time dividend investors know all too well that, sometimes, a dividend that stops growing can end up getting cut.

Investors looking to own a large and diversified healthcare REIT should have Ventas on their watch lists. That said, the weakness in its SHOP portfolio and the fact that it is holding pat on the dividend should be a worry. This isn't the end of the world, by any means, assuming that management is right about the supply/demand outlook improving in the near future. (In fact, there's still time for Ventas to extend its nine-year dividend growth streak, if it hikes sometime in 2020.) However, this is an issue that investors, particularly those who own the shares already, need to be watching very closely. In fact, truly conservative investors should probably stay on the sidelines here until management offers its 2020 outlook, when it reports fourth quarter results.