Supermarket chain Kroger (NYSE:KR) is the latest company to don a pair of gardening gloves and dig its way into the plant-based meat trend.

The new line of patties and ground faux meat extends the grocer's private label, Simple Truth Plant Based, one that it expects will see 50 different products launched this year.

Aside from the fact that Kroger plans to price its store brand of pea-based meat alternatives below that of Beyond Meat (NASDAQ:BYND), this new competitor actually poses a bigger risk to the industry leader than might seem possible, because it reveals several uncomfortable truths about Beyond Meat's position. 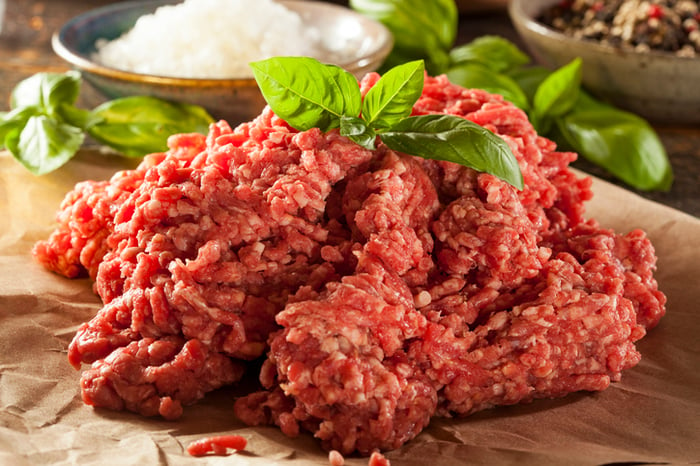 Kroger says the new Simple Truth Emerge: Plant Based Fresh Meats will become part of the largest natural and organic brand in the country, which had sales of over $2.3 billion last year. Simple Truth includes some 1,550 natural and organic products, and the new, plant-based extension of the brand includes vegan chocolate chip cookie dough, oat milk, sour cream, deli slices, sausage, and other products.

The meat-alternative line was first tested in 60 stores over 16 weeks in partnership with the Plant Based Foods Association, and also included deli slices, roasts, seitan, and jackfruit. Depending on who's counting, the protein segment of the plant-based market is expected to grow at a compounded 8% annual rate over the next five years.

While a rising tide might lift all boats, there is good reason Beyond Meat investors should still be worried.

There seems to be plenty of opportunity for everyone. Beyond Meat was recently buoyed by the news that McDonald's (NYSE:MCD) would expand its test of Beyond Meat's burgers in Canada, and rival Impossible Foods CEO Pat Brown told Reuters it would be "stupid" for his company to pursue the chain -- because it can't keep up with demand -- and "having more big customers right now doesn't do us any good until we scale up production."

Some analysts agree, and caution that McDonald's willingness to only slightly expand the pilot program suggests it also has reservations about Beyond Meat's ability to service all of its restaurants.

While Impossible Foods quickly walked back its CEO's comments the next day, with Brown saying "we would never blow off or disrespect a potential customer," his original point underscores the limitations of these upstarts until they can reach scale.

All hat, no cattle

Competition is growing. In addition to Kroger, protein giant Tyson Foods introduced a plant-based meat alternative, as did Nestle, while ConAgra, Hormel, and Kellogg have all also said they have or plan to.

It highlights just how shallow Beyond Meat's competitive moat is, as virtually anyone can enter the space, and Kroger's entry means a good portion of Beyond Meat's business may evaporate if other supermarkets do the same.

Although Beyond Meat's restaurant business is its fastest growing segment, retail has always been the biggest part of Beyond's business, and in the third quarter represented 52% of the total.

While Beyond Meat does have the benefit of name recognition, especially in comparison to the word salad that Kroger chose for its meat alternative, it may find, just as Blue Apron (NYSE:APRN) did, that such advantages actually account for little. The meal kit maker saw its first mover advantage evaporate after other companies, especially supermarkets, began introducing their own kits.

There was nothing special about Blue Apron that justified it selling it meal kits at a premium, and now we're likely to see Beyond Meat lose the ability to price its product at a premium too. It only posted its first profit last quarter, now margins may soon come under pressure from rivals undercutting its prices.

Kroger entering the plant-based meat market may not seem like a problem at first glance, but there are strong headwinds building up to its business model that we're likely to see Beyond Meat encounter even more turbulence.