Shares of Apple (NASDAQ: AAPL) gained 86.2% in 2019, according to data from S&P Global Market Intelligence . The tech stock's share price tracked relatively closely with momentum for the broader market for much of the year and then dramatically outperformed from September through December thanks to strong performance for its wearables products. 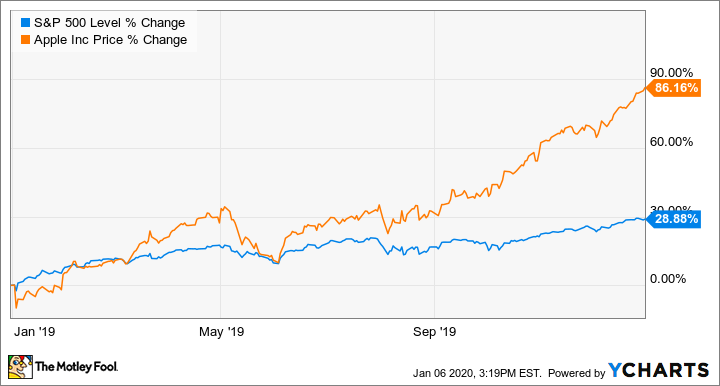 iPhone Sales were down from 2018, but they still came in ahead of expectations, and the company's business was lifted by strong performance for its wearables segment. While the Apple Watch continued to gain traction and enjoy significant sales growth, the biggest story of the year for the company was the success of its AirPods.

Market tracking from Gartner found that iPhone unit sales fell nearly 11% year over year in the third quarter of the calendar year, and revenue for the popular mobile hardware was down 9% in the quarter. Growth for Apple's services segment (which includes revenue generated from the company's mobile app store and subscription-based offerings like Apple Music) also slowed in the year.

However, explosive growth for AirPods, promising momentum for the Apple Watch, and the promise of a bigger tech and feature leap for the iPhone line in 2020 powered a great year for Apple stock. Toni Sacconaghi, an analyst at Bernstein Research, estimates that AirPod sales came in at roughly $6 billion in 2019 and nearly doubled compared to 2018. The Bernstein analyst projects that AirPod revenue will hit $15 billion in 2020.

Apple stock has continued to gain ground in 2019, with shares up 5.7% in the year's trading so far. 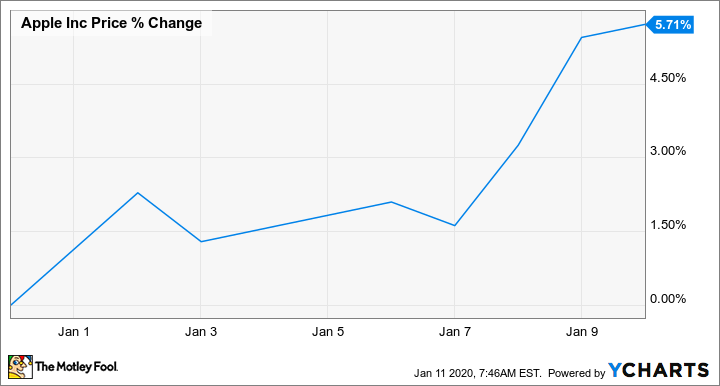 Sales moved higher early in January's trading as the broader market continued on an upward trajectory and news of an uptick in iPhone sales in the Chinese market emerged.

Many analysts expect that Apple will launch a 5G-compatible phone this year, and this move could cause a significant uptick in sales for the handset line. Combined with strong momentum for the company's wearables segment and high-margin services revenue continuing to climb, it could be a big year for the company.

Apple is scheduled to report results for the first quarter of its 2020 fiscal year after the market closes on Jan. 28. Shares trade at roughly 23.7 times the average analyst target for this year's earnings.