Stocks are off to an encouraging start in 2020. The S&P 500 is up 1.1% in January, but not every investment is naturally moving higher. There are plenty of stocks that have retreated through the first seven trading days of the year, and that includes more than 200 U.S. exchange-listed companies that have surrendered at least 10% of their value. 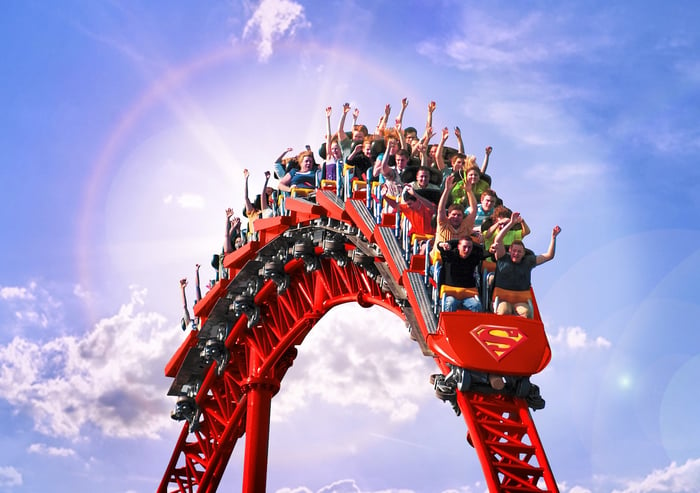 Shares of Six Flags tumbled last week after a double dose of bad news. The regional amusement-park operator warned in a Securities and Exchange Commission filing that Riverside Investment Group, the Chinese developer that was building licensed Six Flags parks in the world's most populous nation, was in default of its required payments. Riverside has been struggling given China's slowing economy and declining real estate market. It remains to be seen if any of the Six Flags branded projects will be completed in China.

Closer to home, the company warned that revenue for the recently concluded fourth quarter will fall $8 million to $10 million below the prior year's results. Lower attendance levels and weaker-than-expected season pass and membership sales will weigh on the report, which will also have some one-time hits related to the challenges in China. The fourth quarter is a seasonally sleepy time for Six Flags, but now there are more uncertainties for investors to worry about.

The big drop in the stock has pushed the yield up to 9.2%, making it a magnet for dividend investors. Negative attendance trends don't necessarily bode well for the sustainability of those chunky distributions, but it's hard to read too much into Six Flags' performance at a time of year when most of its parks are closed until the springtime.

There was a time when in-flight connectivity was a luxurious novelty, and Gogo was the platform of choice for airlines and their passengers. The niche has expanded over the years, but the fundamentals are working against Gogo. There are now more competitors getting in-flight customers onto the internet, and the cutthroat nature of the market is forcing Gogo and its peers into paying for upgraded equipment.

The dagger this year came when CEO Ed Bastian of Delta (NYSE:DAL) painted a portrait of the future of the airline industry as a keynote speaker at last week's CES. He offered up a high-tech vision where Wi-Fi is free across all flights, allowing the industry to digitize air travel. Naturally, free connectivity isn't sitting well with Gogo.

The country's largest multiplex operator is bracing for a rough 2020, and that's weighing on its shares. The movie theater industry in general had a solid 2019, shattering box office records. But results weren't as kind closer to home, with the actual number of tickets sold for domestic screenings clocking in as one of the weakest showing in years.

CFO Craig Ramsey spoke at an investor conference last week, discussing how AMC failed to meet expectations in 2019. He believes that the shift of consumers to streaming media is weighing on demand at the local multiplex, and the narrative will only get louder in 2020 given a slate of releases that most view as weaker than the films that hit the big screen in 2019.