Battery storage systems increase the reliability and efficiency of renewable power resources like wind farms and solar panels by banking energy for later use. U.S. utilities are signing an increased volume of contracts for battery-based energy storage, either as part of their own sustainability goals or under the green power mandates of the states in which they operate. As of February 2019, a total of seven states had policies in place that require a certain amount of battery storage to be built.

Homeowners are also looking to battery storage to fulfill power needs, particularly in regions that have been threatened with blackouts, like California.

The AES Corporation (NYSE:AES), General Electric Company (NYSE:GE), and Vivint Solar (NYSE:VSLR) stand out in the space, even in the face of competition from big players like Tesla (NASDAQ:TSLA) and NextEra Energy (NYSE:NEE) because they are approaching the sector with an eye on contracts that will provide a steady, long-term revenue stream. Investing in one of these companies could represent an opportunity for investors looking to get in on the renewable energy boom. Here's a look at what all three are doing to position themselves for gains. 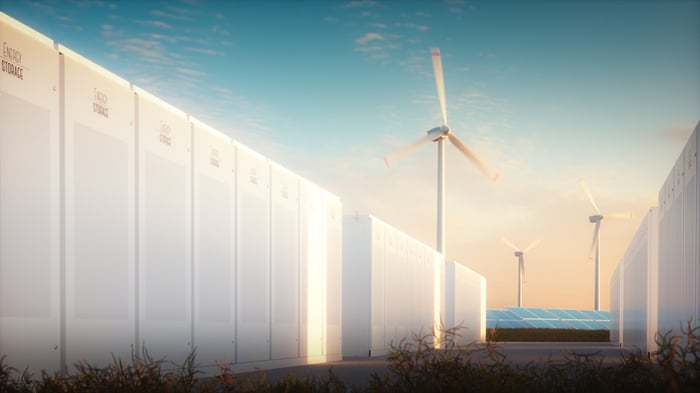 AES: a proven partner for utilities

AES's distributed energy unit has been developing solar and solar-plus-storage projects since 2009. The company has more than 150 MW of operating projects throughout the U.S. and more than 300 MW of additional projects in development and under construction.

The company has developed storage projects on its own and through Fluence, a partnership with the German industrial conglomerate Siemens. An example of one of the company's contracts is its 100 MW AES Southland battery in Southern California. The project was awarded a 20-year power purchase agreement as part of a $2 billion repowering program that will replace gas-fired plants with more efficient technology.

GE has had a few stops and starts in its development of battery storage but has seen recent success with its Reservoir systems, including a key win in Australia. After securing contracts to install batteries sized at 30 MW or less in California and Ontario, the company recently landed a deal to deliver a 100 MW project that will accompany the 200 MW Solar River plant north of Adelaide, South Australia. The battery is expected to be up and running in 2021.

Vivint Solar: a smaller player with an innovative contract

Vivint Solar is included on the list with more established players in the U.S. power generation business because it has designed something innovative that responds to a growing market need and is likely to increase revenue over the long-term.

Utilities have started asking developers to build solar energy projects and install a storage component at the same time, rather than add storage to existing projects. These solar-plus-storage projects have come online in Hawaii and California. Vivint is taking the concept to the residential solar market, having launched a contract structure that will enable homeowners to pay one rate for solar and battery storage in California. The battery can be used during power outages and during peak demand hours when utility rates are highest. Vivint typically offers installation of residential solar panels with no up-front cost to the customer in exchange for a 20-year contract to sell power to the property owner.

Hold these stocks as demand continues to grow

AES, GE, and Vivint have established programs to meet the demands of utilities and homeowners with near-term and long-term renewable energy goals. All three stocks have outperformed the S&P 500 over the past year and may see new gains based on energy storage demand. Investors should consider adding one or more of the companies to a portfolio if they are looking for a renewable energy play that goes beyond wind and solar power.