Pest control specialist Rollins (NYSE:ROL) was an unexpected market darling, with its stock routinely outperforming the indexes during this big bull run.

Fueled by ever greater numbers of acquisitions, the owner of Orkin and Western Pest Service saw revenue rise 43% over the last five years, while operating income soared almost 75%. Rollins stock more than tripled in value during that time, compared to a 75% gain by the S&P 500. 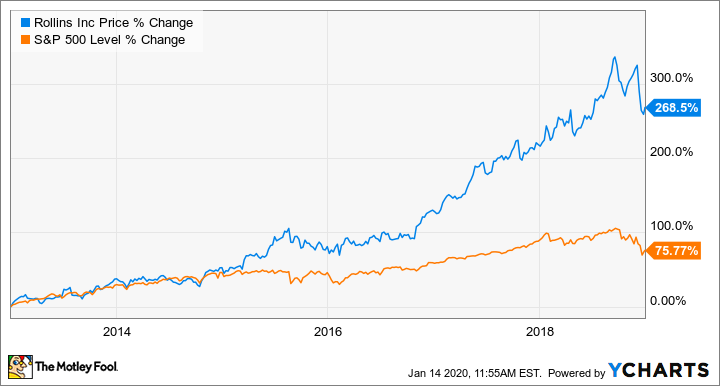 Yet the first quarter of 2019 saw its growth by acquisition strategy falter: After 13 consecutive years, the pest control leader failed to post higher sales and profits. It then compounded the error by repeating it in the second quarter.

Rollins was able to get back on track in the third quarter, but when it posts fourth quarter results on Tuesday, Jan. 21, investors should be looking for the trend that holds. Were the first and second quarters essentially one-off events, or was the third quarter the outlier as the weight of adding ever more businesses under its rather broad umbrella finally catches up to the company?

Rolling up the industry

Rollins has not been shy about making acquisitions, adding more than 50 over the past 18 months.

CEO Gary Rollins has previously said, "We remain confident in our strategy and action plans, and are working hard to grow the business both organically and through strategic acquisition," but buying growth is never a problem -- until it suddenly is.

Fortunately pest control enjoys remarkable stickiness with consumers, perhaps because we prefer not to live alongside creepy crawlies. And with rats and cockroaches supposedly the only two creatures naturally predisposed to survive a nuclear war, Rollins is almost guaranteed to always have business, at least up to Armageddon. 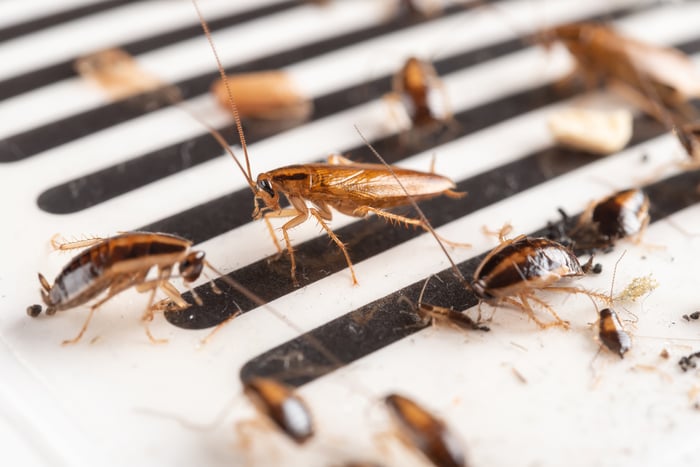 More importantly, the businesses that Rollins adds to its roster typically begin boosting sales and profits rather quickly.

Because it went on a particularly big shopping spree in the back half of 2018, adding over two dozen businesses during that time, it will be lapping its acquisitions in the fourth quarter and should start to see their contribution to organic growth begin to emerge.

A return to growth predicted

Rollins doesn't offer quarterly or full-year guidance, leaving Wall Street analysts to their own devices, which is why the bug stomper's results can seemingly fluctuate compared to forecasts. Yet they are expecting Rollins to post a 13% increase in revenue this quarter, or $504 million, while earnings are seen as rising 6% year over year to $0.17 per share.

For the first nine months of 2019, revenue is up 9.5% to $1.5 billion, and analyst expectations would see the pace of quarterly sales growth almost doubling the rate of growth a year ago.

That will naturally be in part because of all the companies Rollins has purchased, but it seems to have taken its foot off the gas pedal this time around, as no new acquisitions have been announced so far.

Investors should also see Rollins hike its dividend again. It has raised the investor payout for 17 straight years, and the quarterly dividend of $0.105 per share jumped 12.5% last year. It routinely hikes the dividend by double-digit rates.

But it comes at a price

Rollins stock is actually down 9% over the last 12 months, and is 20% below its 52-week high. The shares, however, have bounced off the lows they hit in August, though it would be hard to recommend the stock at these levels since they still carry a premium valuation.

The pest control specialist goes for 56 times trailing earnings and 44 times next year's estimates. The stock trades at more than six times sales and at almost 100 times the free cash flow it produces.

Even with a well-grounded growth by acquisition strategy in place, those are still some nosebleed valuations that require it to continue to execute perfectly on its plan.

Rollins is a solid business, but not at any price -- and until investors can get a better sense about whether bouncing back last quarter is the new trend, they might end up getting squashed like a bug buying in now.