Ocwen Financial (NYSE:OCN) is a non-bank financial company that services housing loans in the U.S. residential mortgage market. Ocwen's focus is on the market for housing loans that are in foreclosure or have borrowers with sub-prime status (lower credit scores).

Ocwen has had trouble growing its business because of the backdrop of a strong residential housing market. There are simply fewer mortgage loans in foreclosure for Ocwen to service. To spark growth in its loan portfolio, Ocwen acquired mortgage servicing peer PHH in a deal that closed in October 2018.

One year later, we can now judge how the acquisition of PHH has initially panned out.

The rationale for buying PHH

Like Ocwen, PHH is a residential mortgage servicer operating in the United States. The two companies announced that Ocwen would acquire PHH for $360 million in February 2018 and completed their merger in October 2018.

From PHH's perspective, selling to Ocwen concluded a multiyear strategic review that involved exiting multiple business lines and selling assets. PHH has struggled for years as an unprofitable business, and after selling many of its assets, it lacked the scale on its own to drive profitability.

From Ocwen's perspective, it was able to acquire PHH at a 35% discount to its book value. Although PHH was unprofitable on its own, Ocwen believed it could turn around the business and drive cost savings as a combined company by eliminating duplicative overhead costs.

On paper, the combination made sense. PHH and Ocwen should be stronger together than apart because they operate similar businesses and could benefit from greater scale. It also makes sense for an industry to consolidate during tough times. Mortgage servicers focused on distressed loans have faced headwinds as lower interest rates and a strong economy have produced fewer defaulted loans to service. 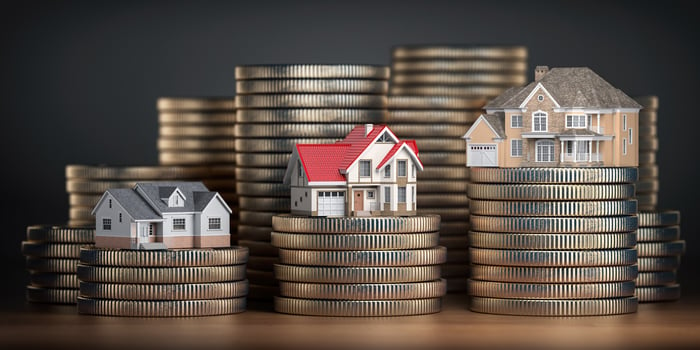 Unfortunately, the acquisition of PHH hasn't helped Ocwen thus far. As can be seen from the table below, Ocwen has seen its revenue decline for several years while its net loss has narrowed. The company was able to buy revenue growth with the PHH deal, but the net loss expanded quite a bit in 2019.

Taking a close look at Ocwen's income statement reveals the issue. Although Ocwen is now generating more revenue and higher earnings before interest expenses, the company's interest expenses have more than doubled. In the first nine months of 2018, Ocwen incurred $189 million in interest costs. Over that same time period in 2019, the company expensed $388 million. The larger interest expense was enough to push the company an additional $100 million into the red.

Because Ocwen is a financial institution with complex assets and liabilities, its balance sheet can be tough to decipher. As of Sept. 30, 2019, the company disclosed $8.7 billion in total debt with just $351 million in cash. Keep in mind that Ocwen's market capitalization is only around $200 million!

Finally, but perhaps most importantly, Ocwen's shareholders have felt the pain of the PHH acquisition. In the last year, the stock price has declined precipitously as the acquisition saddled the company with more debt and steeper losses. 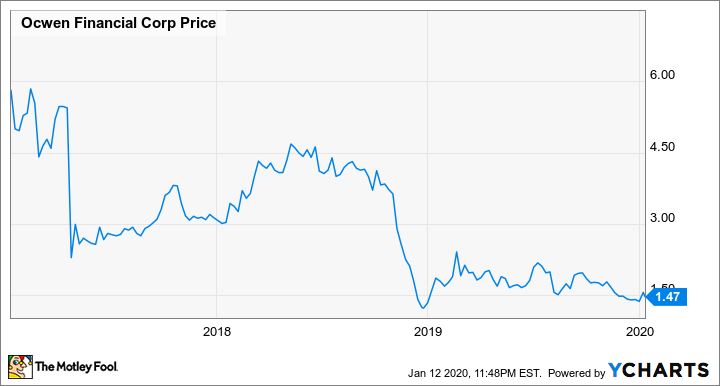 With Ocwen's stock this low, some investors may view the stock as a bargain. However, buyers should be aware that Ocwen is a risky stock. The company is now operating in an unfavorable industry environment, which will most likely see revenue continue to decline until the environment changes. Making matters worse, Ocwen is unprofitable and has an ugly balance sheet.