It seems like every other day, another TV provider or tech company has launched its own streaming service. All of this new competition may have some investors wondering if the streaming space is getting too crowded -- and whether or not they can benefit from this market at all. 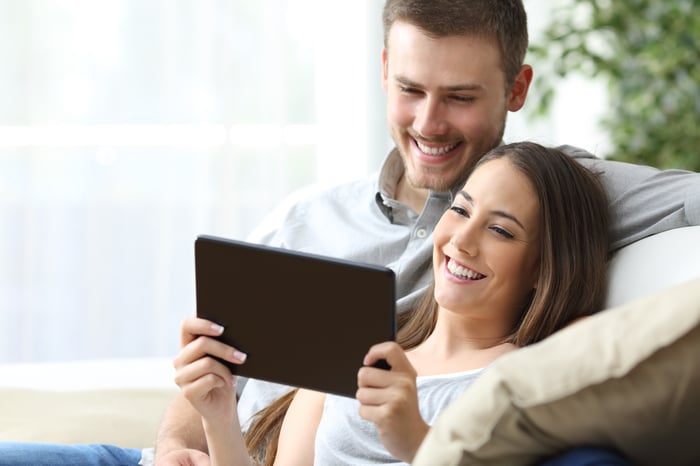 Netflix is, of course, the undisputed video streaming company with 158 million paying global streaming subscribers. In case you're worried that Netflix couldn't possibly grow its subscriptions any more than it already has, then consider that the company added 6.77 million net new subscribers in the third quarter, with 6.26 million of those being international members.

Netflix's growing library of original content, paired with the fact that most U.S. consumers are more than willing to subscribe to more than one streaming service, means the company will likely continue to be the de facto streaming service for years to come. Add to all of this the fact that Netflix still has room to grow its international subscribers, and this video streaming giant looks to be in as good of shape as ever.

You're probably aware that Roku doesn't have a video streaming service, but that doesn't keep the company from benefiting in the streaming market.

The company's video streaming software platform allows TVs to connect to the Internet and download apps and services. Roku sells ads on its platform and also takes a cut from video streaming subscriptions every time a user signs up for one through its platform. This means Roku benefits no matter who is winning in the streaming wars.

Roku has had massive success with this setup, and the company ended the third quarter with 32 million active accounts, an increase of 36% from the year-ago quarter. Additionally, users increased their time spent streaming video through the company's platform by 68% in the quarter.

Roku's share price has skyrocketed more than 200% over the past 12 months, but don't think this company's run is over just yet. With the streaming wars now heating up, this company looks poised for even more growth.

Disney may be a newcomer to the video streaming market, but don't count the company's Disney+ service out of this competition. Disney proved that it has a winning service on its hands when more than 10 million people subscribed to its service on the first day it launched (which also included pre-launch sales in the weeks leading up to the official launch). Now, the latest estimates put that figure at 25 million subscribers.

Disney's video streaming opportunity is just getting started. The company has made three essential purchases, including Lucasfilm and all things Star Wars, Marvel, and 20th Century Fox, which gives Disney an incredible library of characters and stories to use on Disney+.

Add to all of that the fact that Disney already owns some of the most beloved classic stories and characters, and you can quickly see how the company is creating its own lucrative niche in the video streaming market.

One inevitable attribute of the video streaming market

Investors should keep in mind that as the video streaming market takes off, there's going to be a lot of talk about these services both gaining and losing subscribers to each other. Some of this is inevitable, as some viewers will sign up for a specific service to watch one show and then cancel. But overall, the back-and-forth subscription worries aren't much to be concerned about.

There's plenty of evidence showing that users willingly subscribe to more than one streaming service. Additionally, it's more likely that traditional cable and satellite TV providers have more to worry about than streaming services. Viewers are piecing together their video content needs with multiple subscriptions, and the only losers in this scenario will likely be old-school TV providers.