New game consoles are coming this year, with the PlayStation 5 and Xbox Series X set to debut in time for the 2020 holiday season. It makes sense, then, that sales of the current generation of game consoles would slump ahead of those launches.

But the game console product cycle doesn't explain why video game retailer GameStop's (NYSE:GME) 2019 holiday sales were so bad. The company reported a staggering 24.7% decline in comparable-store sales for the nine-week period ended Jan. 5, along with a 27.5% decline in total revenue.

That's the worst performance by far in recent memory: 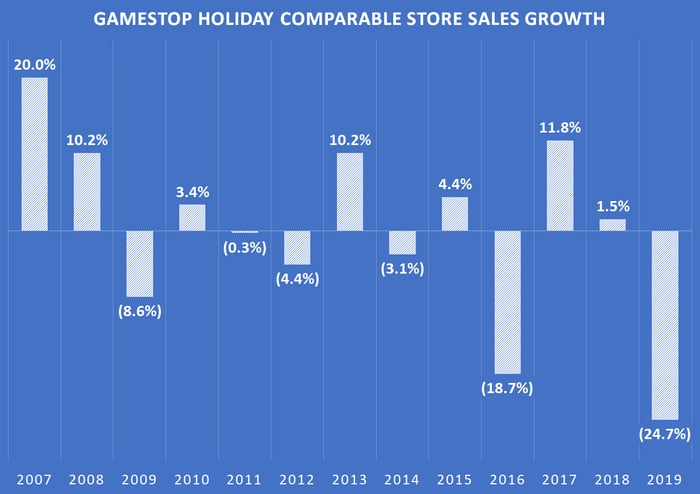 GameStop was under no illusion that it would perform well this holiday season. "We expected a challenging sales environment for the holiday season as our customers continue to delay purchases ahead of anticipated console launches in late 2020," CEO George Sherman said in the company's holiday sales release.

But console purchase delays explain only some of what's going on. The current-generation PlayStation 4 and Xbox One launched in 2013. GameStop's holiday comps in the previous year weren't great (down 4.4%), but they were far from a disaster.

"However, the accelerated decline in new hardware and software sales coming out of black Friday and throughout the month of December was well below our expectations, reflective of overall industry trends," Sherman said.

A shift to digital

GameStop is facing an environment where options for buying new console games have expanded. Not only does the company compete with retailers like Walmart, Target, Best Buy, and Amazon.com, but digital downloads are also on their way to replacing physical game discs.

The next-generation game consoles will still have disc drives, but they'll also have ultra-fast solid-state storage drives (SSDs). From a performance perspective, streaming data from a disc is going to be quite a bit slower than from an SSD. The PlayStation 5 will require games to be installed on the SSD due to this speed difference, paving the way for discs to eventually be removed from the equation entirely.

As digital downloads become a larger portion of total console game sales, GameStop's used-games business, a cash cow, will suffer. That business has been a competitive advantage, providing a way for gamers to sell back their used games and buy other used games at a discount. But there's no such thing as a used digital download. 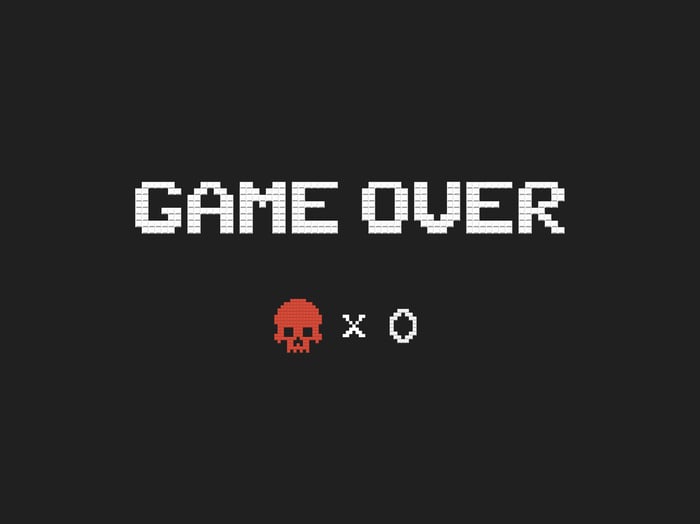 When the PlayStation 5 and Xbox Series X arrive later this year, GameStop will likely enjoy a sales boost. But it won't change the fundamental challenges facing the company. A chain of thousands of stores dedicated to selling disc-based video games makes no sense anymore.

GameStop now expects comps to tumble by 19% to 21% for fiscal 2019, and now sees adjusted earnings per share in negative territory for the year. Here's how GameStop's guidance for fiscal 2019 has evolved:

I wrote back in 2016 that GameStop's decline would happen slowly at first, then all at once. I think the retailer has reached the all-at-once phase.