Enphase Energy (NASDAQ:ENPH) went on a monster run last year. Shares of the company, which makes microinverters for solar panels, rocketed an eye-popping 452.4%, making it the best performing solar stock by a wide margin. Because of that, it was one of the top-performing renewable energy companies in the last decade.

With shares of the renewable energy company up so sharply in the past year, investors might be wondering whether it has more room to run. Here's a look at the case for and against buying Enphase right now. 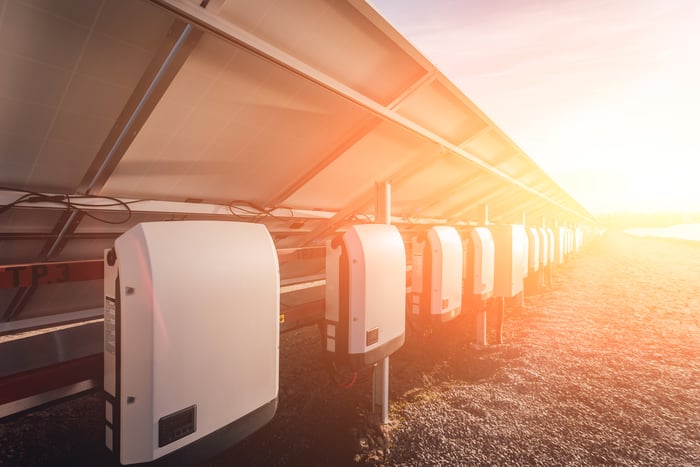 The case for buying Enphase Energy

One of the main factors fueling Enphase Energy's strong stock performance last year was its financial results. Revenue was on pace to rocket 96% year over year. At the same time, its operating income was tracking for a 495% surge. Powering this growth has been strong sales for its latest microinverters, which efficiently convert the energy produced by solar panels into usable electricity.

The company also continued to develop new products aimed at increasing its addressable markets. In addition to growing its residential solar offerings, it's also working on opportunities to capture those in residential energy storage, commercial solar, and off-grid solar and storage by launching new products to reach those markets this year. These innovations set the company up to continue growing sales and profits at a brisk pace in the coming years, given the need for new renewable energy investment -- especially since solar development is starting to accelerate because of the rapid decline in the costs of both panels and energy storage.

Meanwhile, thanks to its growing profitability, Enphase has been generating free cash flow for the past two years. That's helped boost its net cash balance, which was on track to end 2019 at $250 million. That cash-rich balance sheet gives it the financial flexibility to continue making investments to grow its market share.

The case against buying Enphase Energy

With Enphase's stock rocketing last year and already adding another 16% to its gains in 2020, it now trades at a lofty valuation of nearly 85 times earnings. However, with its profitability expected to continue growing, it sells for a lower multiple of around 30 times its forward earnings. While that's reasonable for a company growing as briskly as Enphase, if it doesn't deliver on its expected growth, shares could tumble as growth investors reprice the stock.

Another concern with Enphase is the threat of increased competition. The company has done a good job staying ahead of competitors by plowing money into research and development. However, it needs to continue innovating to remain in front of the competition. That includes other microinverter makers and companies like SolarEdge Technologies (NASDAQ:SEDG), which produces power optimizers that are lower cost, though less efficient, and Generac (NYSE:GNRC) after the generator manufacturer recently made acquisitions in the solar power electronics space. If existing rivals like SolarEdge begin making both more efficient and lower-cost products, they could win market share away from Enphase Energy. Meanwhile, if more new entrants like Generac increase competition, it could drive down prices, affecting margins.

Verdict: Enphase is a bit too hot right now

Enphase Energy appears to have a bright future supplying the solar industry with much-needed microinverters. However, shares have been scorching hot over the past year and currently trade at a rich valuation. They could quickly give back some of those gains if the broader stock market sells off or the company reports disappointing news, which happened last quarter. That's why I think investors should hold off buying shares right now and instead wait for the next pullback before they consider investing in this stock for its long-term promise.