Shares of Star Bulk Carriers (NASDAQ:SBLK) surged last year, even though it was a volatile one for dry bulk shipping rates. Overall, shares of the shipping company rallied 29.2%, which was just ahead of the S&P 500's 28.9% gain.

With the shipping stock surging last year, investors might be wondering if it has any more room to run. Here's a look at the case for and against buying shares right now. 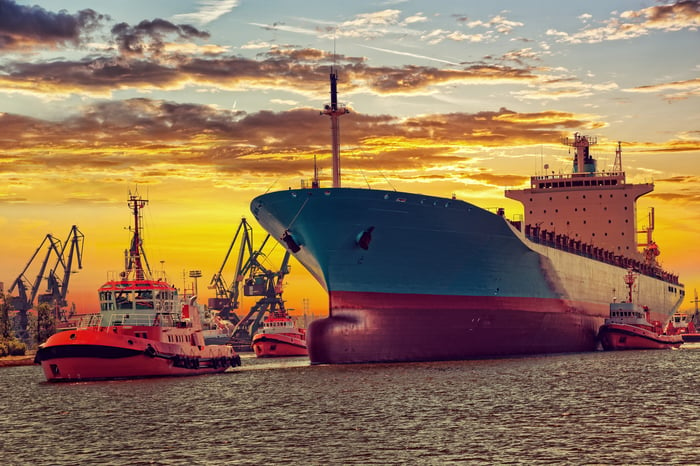 One of the drivers of last year's rally was a move that Star Bulk Carriers made to prepare its ships for an upcoming rule change for the shipping sector. In late 2018, the company secured financing to equip its entire fleet with Exhaust Gas Cleaning Systems, or scrubbers, before the January 2020 implementation of new rules capping sulfur emissions for ships. Shipping companies had two options, switch to higher cost low-sulfur fuels or install scrubbers. While the latter option had a high upfront investment, roughly $2 million per ship in Star Bulk's case, it would keep fuel costs lower. The company appears poised to cash in now that the new rule has gone into effect.

With that investment poised to start paying off, Star Bulk is now in the position to return cash to shareholders, which recently led it to institute a dividend that currently yields around 1.9%. However, instead of paying its investors a fixed rate each quarter, Star Bulk has a variable dividend policy based on its cash balance at the end of each quarter. That will enable it to reward its investors as its profits rise while maintaining a solid financial profile. If market conditions improve, shareholders could see that dividend increase in the coming years.

One of the concerns with any investment in the shipping sector is that dayrates for vessels can fluctuate wildly with market conditions, especially for economically sensitive dry bulk carriers. That was the case again last year. In early September, the Baltic Dry Index, which tracks shipping rates for dry bulk carriers, hit a five-year high because of healthy economic conditions and fewer ships on the seas as companies like Star Bulk installed scrubber systems. Rates, however, have plunged since then, recently touching a three-year low. This slump is contrary to expectations that they would rise in response to new fuel standards in the shipping sector.

If rates continue to underperform expectations, Star Bulk Carriers' investment in scrubbers won't pay off as expected. That could impact its ability to pay dividends since it borrowed money to fund the bulk of that investment and could need to reallocate funds to repay this debt if rates continue plunging.

In addition to the incremental debt Star Bulk took on to fund its scrubber investment, the company also routinely borrows money to build and buy new ships. As of the end of the third quarter, the company had nearly $1.6 billion of debt and lease obligations against about $3.2 billion of assets. That debt will act as a weight on the stock if its financials start deteriorating amid a prolonged plunge in dayrates.

Star Bulk Carriers got out in front of changes in the shipping sector by installing scrubbers on all its ships so that it can continue burning lower-cost fuel. That bet could pay off if shipping rates rise because of the increased costs of the new standard.

Unfortunately, shipping rates have initially gone in the opposite direction. That could have a major impact on Star Bulk, given its large debt load, which could weigh on shares if rates keep sinking. That elevated risk of underperformance, especially after 2019's rally, is why this shipping stock doesn't seem worth buying.