Johnson & Johnson's (NYSE:JNJ) subsidiary Janssen announced that it's seeking to expand the use of its depression nasal spray, Spravato, as a short-term treatment to be used alongside conventional oral antidepressants.

Spravato, which was already approved last month in Europe as a depression treatment, targets patients with treatment-resistance depression who have failed to see improvements in their symptoms through other methods. It can also treat patients who have major depressive disorder and who are experiencing suicidal ideation with intent -- the demographic for which it is seeking approval for in Europe. 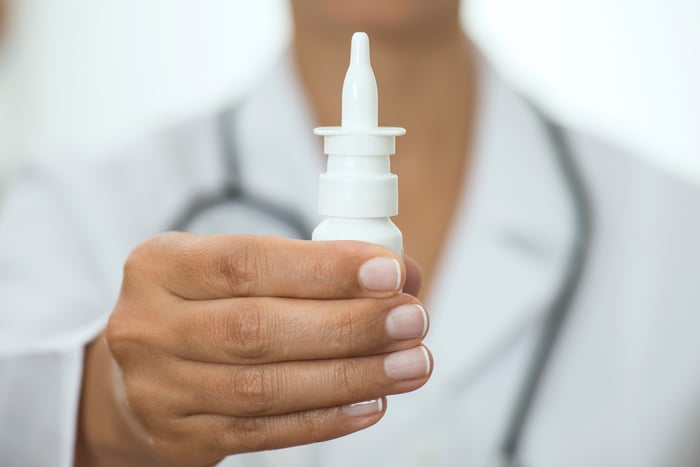 Janssen's submission is backed by two phase 3 clinical studies – Aspire I and Aspire II – which both showed impressive results in reducing depression symptoms while handily outperforming a placebo nasal spray. One trial found that around 70% of patients responded well to Spravato, with a 50% reduction in symptom severity. In addition to being a fast-acting treatment, with depression symptoms subsiding as quickly as four hours after the first dose, Spravato is well tolerated by patients as well. The most common side effects were dizziness, headaches, and nausea.

Spravato – also known as esketamine – is a modified form of ketamine. While used illegally as a hallucinogen, ketamine can be used to induce anesthesia in patients. Johnson & Johnson has high expectations for the nasal spray, which carries a price tag of $6,785 for the first month of a patient's dosing schedule.

The pharmaceutical drug first received approval from the U.S. Food and Drug Administration in March 2019, and Janssen is now awaiting a response for a supplemental New Drug Application filed for Spravato in October.