Beyond Meat (NASDAQ:BYND), the producer of plant-based meat alternatives, wowed the market when its stock soared 160% in its first day of trading last May. Further gains followed, with the shares skyrocketing to a peak of about $234 two months later. These days, though, Beyond Meat is off 50% from that peak as the market's euphoria turned to concern over the future impact of competition. And that's exactly why recent news from rival Impossible Foods could give Beyond Meat and its investors more reason to worry. 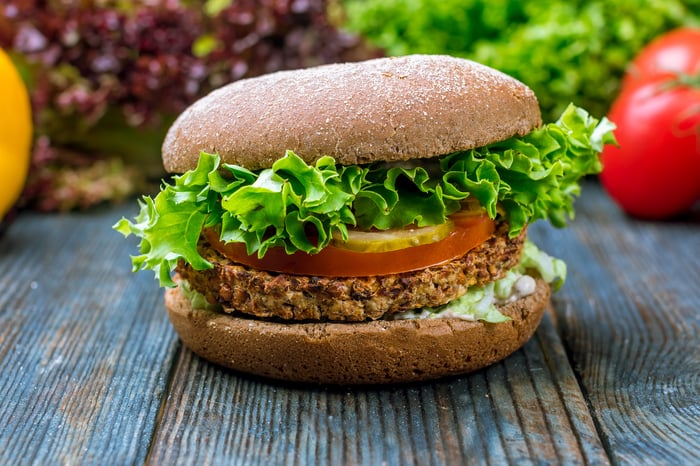 Impossible Foods CEO Pat Brown told CNBC in an interview last week that the company is charging ahead with the development of more alternative meat products and will nearly double its research and development team this year. The company, which launched the Impossible Burger about three years ago, announced two new products at last week's annual Consumer Electronics Show in Las Vegas: plant-based ground pork and plant-based sausage. Consumers will get a taste of the sausage patty in the Croissan'wich at select Burger King locations later this month, but Impossible Foods didn't provide timing specifics for the meatless ground pork product.

Beyond Meat also faces competition from its former investor Tyson Foods (NYSE:TSN), which last year launched its own plant-based meat product line called "Raised & Rooted." Perdue Foods, Nestle (OTC:NSRGY), and Kellogg (NYSE:K) are other food-industry heavyweights that are getting in on the market.

And then there are companies that represent competition down the road. Memphis Meats is developing alternative meat through the cultivation of animal cells. The founder of China's Zhenmeat told CNBC that the start-up is talking with investors in a push to raise $2 million this year. Though the company is far from the development level of the $8 billion Beyond Meat, its expertise in providing a product to suit local cuisine, like mooncakes and dumplings, could eventually give it an edge in the Chinese market -- a place of interest for Beyond Meat. That market was valued at about 6.1 billion yuan ($880 million) in 2018, growing 14% from the prior year, according to the Good Food Institute. Beyond Meat's chairman, Seth Goldman, told Reuters in an interview that the company aims to start production in Asia by the end of 2020 in order to sell its products there.

Some might argue that the global market is big enough for all of these players and more. According to a UBS report, the plant-based meat market, with a compounded annual growth rate of 28%, is expected to reach $85 billion by 2030. The problem, however, is profit. The more players in the market and the more products available, the more pressure will drive down prices. MarketWatch quoted a UBS research report on Beyond Meat in November, saying the company could reach $1.8 billion in sales by 2025 to seize a 13% share of the U.S. plant-based meat market. That sounds promising, but there's a caveat: UBS warned that if customers shop around for the lowest prices and aren't loyal to one particular brand, Beyond Meat could find itself facing "commodity industry profit margins."

With the number of options in the general meat alternative pipeline, the possibility of Beyond Meat losing at least some of its pricing power is something investors should consider before buying the stock -- especially at the current level. While down from its peak, the stock still is trading more than 300% higher than its $25 IPO price, and on Jan. 13, the stock surpassed the average analyst price target of $105.13 in intraday trading when it reached more than $107.

Beyond Meat's earnings are a reason for some optimism, with the company reporting a 250% surge in quarterly sales in its October report and net income of $4.1 million compared to a loss in the year-earlier period. But even good earnings reports can't erase the problem of pressure on prices. And that brings us back to Impossible Foods' aggressive strategy for the year. There may be plenty of customers for alternative meat products, but there are also a number of producers. As each producer ramps up offerings, the consumer's choices multiply. And that puts Beyond Meat's pricing power at risk. If the multitude of choices makes the consumer less loyal to one particular brand, Beyond Meat's earnings may suffer -- along with investors' appetite for the food stock.