Investing in biotech stocks can seem like a speculative gamble on binary outcomes, sort of like buying lottery tickets. Fortunately, there are some mid-cap biotechs actually making a profit and that have development pipelines stocked with drug candidates that could produce big winners, giving patient investors the opportunity for gains while riding out the occasional disappointment.

One such stock is Ionis Pharmaceuticals (NASDAQ:IONS). The company is pioneering an approach called RNA antisense, which can be used to block the production of disease-causing proteins. It's taken the company years to perfect the technology and to solve the problem of getting the drug to the targeted tissues in sufficient concentration to be therapeutic without causing side effects. But now, the company is over that hurdle and is rapidly building a portfolio of drugs to treat a wide range of diseases.

The performance of Ionis' stock was underwhelming in 2019, mostly because investors were concerned about future sales of the company's first big drug success. But here are five reasons why 2020 could be different. 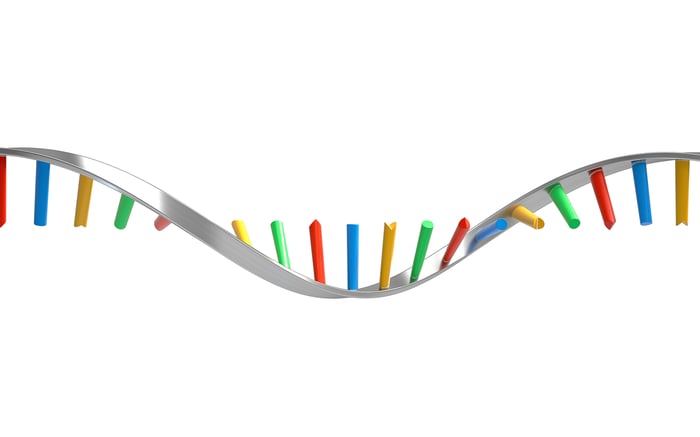 Growing revenue from Ionis' portfolio and its research and development alliances have allowed the company to beat expectations every quarter in 2019. This growth spurred the company to raise full-year guidance for both the top and bottom lines when it reported third-quarter results. The company guided to non-GAAP earnings of more than $300 million on revenue of $1 billion for 2019.

Much of the company's money is coming from sales of blockbuster rare disease drug Spinraza, a partnership with Biogen (NASDAQ:BIIB). Analysts are concerned about competition for the drug, but it's still going strong, with sales up over 25% year to date to $212 million.

Sales of Ionis' other two approved drugs, Waylivra and Tegsedi, are just starting to ramp up as well, generating $29 million in revenue in the first three quarters of 2019. The company also earns license fees and milestone payments from its many partnership agreements as it makes progress advancing its pipeline, a total of $377 million year to date, which is up 67% from the year before.

2. A growing network of alliances

Ionis has formed an impressive set of partnerships for the development and marketing of its drugs. In October, the company's subsidiary Akcea (NASDAQ:AKCA) announced it inked a deal with Pfizer (NYSE:PFE) to advance AKCEA-ANGPTL3-LRx, a drug that has the potential to treat large populations of patients with type 2 diabetes, high levels of blood triglycerides, and non-alcoholic fatty liver disease (NASH). That agreement earned Ionis a $125 million payment in the fourth quarter and makes it eligible for $1.3 billion in milestone payments, plus double-digit royalties. Besides Biogen and Pfizer, Ionis also has deals with Novartis (NYSE:NVS), GlaxoSmithKline (NYSE:GSK), Roche (OTC:RHHBY), AstraZeneca (NASDAQ:AZN), and Bayer (OTC:BAYR.Y).

To investors, these deals are confirmation of the significance of the company's RNA antisense technology. And to the company's business, there are some important benefits. Partnering with market leaders in various diseases means the company can see a rapid ramp-up of sales without having to invest in a sales force.

The milestone payments give the company plenty of resources to invest in its pipeline and technology, as well as generating plenty of cash. Ionis has $2.2 billion of cash on its balance sheet and announced its first-ever share buyback program last quarter. CEO Stanley Crooke said recently that the company will make some investments aimed at strengthening its antisense technology platform "in the coming months," hinting that an acquisition may be in the works.

Ionis has five drugs in phase 3 trials, and any positive results from those could provide an impetus for the share price in 2020. But the company also has 19 drugs in phase 2 clinical trials, four in phase 1, and 18 in preclinical studies. News of success from these programs could trickle in all year long. Results from six phase 2 studies are expected in the next few months.

Many of the drug candidates in the pipeline are aimed at evolving the company beyond rare diseases to treatments for common disorders that affect millions of patients. Currently in phase 2 testing are drugs to treat Alzheimer's disease, Parkinson's disease, amyotrophic lateral sclerosis (ALS, or Lou Gehrig's disease), hypertension, prostate cancer, and hepatitis B.

While Ionis works to get drug candidates through the testing and approval process, it's also improving the technology platform itself, in ways that can be applied broadly across the pipeline.

The most important advancement in recent years is called ligand-conjugated antisense (LICA). This breakthrough is a chemical change to its antisense molecules that makes them attracted to specific tissues in the body, increasing their potency by 30 times, which makes it more effective while diminishing side effects. Ionis currently has LICA technology that targets the liver and 16 pipeline drugs that use it. It's working on other LICA formulations to target other tissues, such as the pancreas, and any progress on that front will open up new drug possibilities and could give a boost to the stock this year.

Ionis scientists also think that, unlike most other biologic drugs, antisense drugs can be formulated for delivery using other routes besides injection. The company believes it's on the verge of developing an oral antisense medicine, which would be a significant breakthrough. It's also demonstrated the feasibility of aerosol delivery to treat lung diseases.

Despite the growing momentum of the company's sales, the advancement of its portfolio, and the endorsement of its approach by some major drug companies, the stock hasn't really budged much. The stock was up only 12% in 2019, a year when the iShares NASDAQ Biotechnology ETF (NASDAQ:IBB) gained 25%, and Ionis shares are selling for 28% below their 52-week high.

Investors may be focused on near-term risks to Spinraza, and if they are, they're overlooking the rest of the story of the company. I think it's likely the news flow during 2020 will change the narrative, and that today's price is a good entry point for investors looking for long-term growth. Shares sell for less than nine times sales, which is not at all expensive compared to other biotech stocks, many of which have no sales or profit at all.