Abercrombie & Fitch (NYSE:ANF) is looking pretty buff these days. While the teen retailer isn't about to return to the days where shirtless models stood around in its doorways to entice customers in, it is flexing the retail equivalent of a beach body as it reported some of its strongest holiday results in years.

Wearing that newfound confidence, Abercrombie is warning shopping mall landlords that it has no qualms about kicking them to the curb if it needs to. It seems to be a veiled threat that if it doesn't win concessions on rent it will happily walk away when its leases expire. 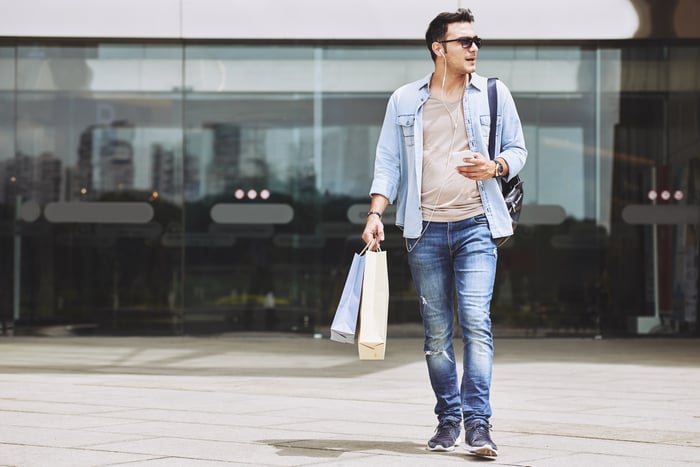 Abercrombie was able to achieve what it seems few other retailers were able to do this Christmas: post higher sales. It used the announcement to also reaffirm its guidance for the fourth quarter.

The retailer says it expects net sales to be between flat and up 2% for the quarter; comps to also be flat to up 2%, versus a 3% increase last year; gross profits to be down 150 basis points from last year's 59.1% margin; and operating expense to be flat to up 2%.

Most of the hits Abercrombie is suffering come from adverse currency exchange rates as well as the effect tariffs on Chinese goods would impose. The last round of tariff hikes hit apparel retail pretty hard.

A return to glory days

While CEO Fran Horowitz didn't release specific numbers about the holiday sales period results, she did say in a statement, "We experienced record revenues in the U.S. over Black Friday week, which includes the Tuesday before Thanksgiving through Cyber Monday, with Hollister setting a new record and momentum at Abercrombie continuing to build, delivering its strongest topline in over five years."

The turnaround at Abercrombie is building to such a degree that she now expects the store to outperform its Hollister sister chain in comparable-store sales, and for the U.S. business to beat out international markets.

Last quarter both Abercrombie and the U.S. segment saw higher comps than its own Hollister and international markets, respectively, and considering just how far down they had been, the change in fortunes seems truly remarkable.

And you can see it reflected in the comments of Abercrombie's CFO Scott Lipesky, who participated in a "fireside chat" at this week's ICR investment conference, where he threw down the veiled challenge to shopping mall operators: "We're willing to walk away from any mall at this point. For us, it's about getting the right store in the right location at the right size."

Horowitz has previously stated that shrinking Abercrombie & Fitch's store footprint is her top priority at the moment. The retailer operates 677 stores in the U.S., 400 of which are Hollister and 277 are Abercrombie stores. It operates an additional combined 200 stores in international markets.

The CEO has already begun the process of winnowing down the retailer's flagship stores, closing locations last year in New York, Milan, and Fukuoka, Japan as their leases came due. It started 2019 with 19 flagship stores and hopes to exit 2020 with just 12. As Lipesky told the ICR conference: "The customer has changed so dramatically. We don't have a need for these large stores long-term."

The rest of its footprint is up for grabs too.

Every two years about half of the retailer's store leases come up for renewal, which should give Abercrombie & Fitch considerable leverage when dealing with its landlords. With a record number of store closings last year and the next wave of closings already beginning, the retailer may have more than a few mall operators open to listening.

Because consumers have changed their shopping habits, retailers have to react to those new preferences -- and Abercrombie finally has. It updated its model, and e-commerce now accounts for around 30% of sales, meaning it's not so dependent upon the mall.

Malls are also adapting to the new landscape, adding more restaurants and experiential opportunities to offset the retail vacancies. But after undergoing such pains to sculpt its beach body, Abercrombie & Fitch now wants to show it off. And malls will be willing to look.