Planet Fitness (NYSE:PLNT) rang in the new year by celebrating a milestone. The gym operator and franchiser opened its 2,000th location on Dec. 31, in Colorado Springs. This capped off an impressive year of opening 261 new locations for 15% unit growth. Now the company has its sights squarely set on the next milestone: its 3,000th location. With over 1,000 new locations currently in its pipeline, this milestone could be reached in the next three to five years.

But more than just continuing to expand the brand by opening new locations, Planet Fitness is also trying to overcome misconceptions by the public regarding fitness. The company recently sponsored an independent study that came back with four widely-held fitness myths. Dispelling them could lead to increased gym membership. 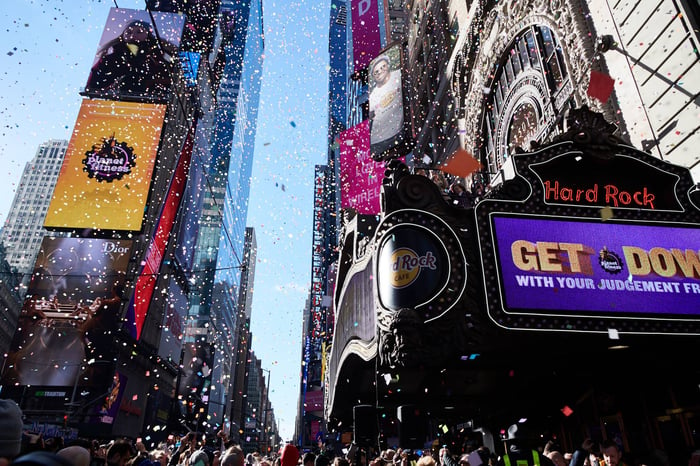 What are the myths?

The company's Bullfit Report addresses four common myths about fitness. First, according to the report, as little as 10 minutes of exercise can yield results, not the 95 minutes that the average person thinks are required. Second, you don't need to work out five days a week for it to be effective; any time you spend exercising is beneficial. Third, head-to-head fitness challenges don't work. And fourth, most people are not motivated by common catchphrases like "No pain, no gain," but some inspirational phrases (like "Investing in yourself") can be highly motivating.

Planet Fitness estimates that 80% of people 14 years and older in the U.S. and Canada still don't belong to a gym. This is the crowd that it targets. It has built its empire quickly by making its gyms "Judgment Free Zones," catering to the casual gym-goer who doesn't want to feel intimidated by bodybuilders.

This strategy has proved effective. But there's still plenty of room for the company to continue growing its members-per-location metric. One way it can do this is by using the Bullfit Report to bust the myths that prevent folks from joining a gym in the first place.

How many more locations?

As already mentioned, Planet Fitness now has 2,000 locations (primarily in the U.S.) and over 1,000 locations already in development. But just how much further can this growth-stock story run? CEO Chris Rondeau reiterated during the Q3 earnings call that the company is targeting 4,000 locations in the U.S. alone. That means Planet Fitness is still just halfway through with its domestic growth, despite its strong growth over the past five years.

Furthermore, Planet Fitness has a largely untapped international growth opportunity. In 2017, it signed a franchise agreement in Panama, and in 2018, it signed one for Mexico. More recently, the company signed a franchise agreement to open a minimum of 35 locations in Australia. Even though this shows some effort, international expansion is still a small part of the Planet Fitness story.

It may simply be an issue of focus, with Planet Fitness giving full attention to its thriving U.S. operations. But this could start to change within the next couple of years. On the Q3 earnings call, Rondeau commented that chief development officer Ray Miolla is approaching two years at Planet Fitness, and in about another year, Miolla's "international focus will be quite a bit stronger."

Investors should celebrate the 2,000th Planet Fitness milestone. A lot can go wrong while expanding, but the company is pulling it off quickly and efficiently. For now, investor attention should remain on U.S. operations, where it would be great to see membership per location continue to increase. Any drop in this metric in coming quarters would be a major red flag.

Also, there's no reason to fret that the growth-via-expansion story is coming to an end. Planet Fitness believes it can still double the number of U.S. locations compared to today, and its current development pipeline already covers half of that future expansion. When the time comes, it will turn its attention to the rest of the (ahem) planet.