Please ensure Javascript is enabled for purposes of website accessibility
Log In Help Join The Motley Fool
Free Article Join Over 1 Million Premium Members And Get More In-Depth Stock Guidance and Research
By Anne Burdakin - Jan 17, 2020 at 8:03AM

The company sells Western apparel, boots, and heavy-duty work wear in 33 states and online. With strong revenue growth and margin expansion, Boot Barn shows no signs of slowing down.

For the third quarter, which ended Dec. 28, the company expects to report that net sales increased a whopping 11.8%, to approximately $284 million. 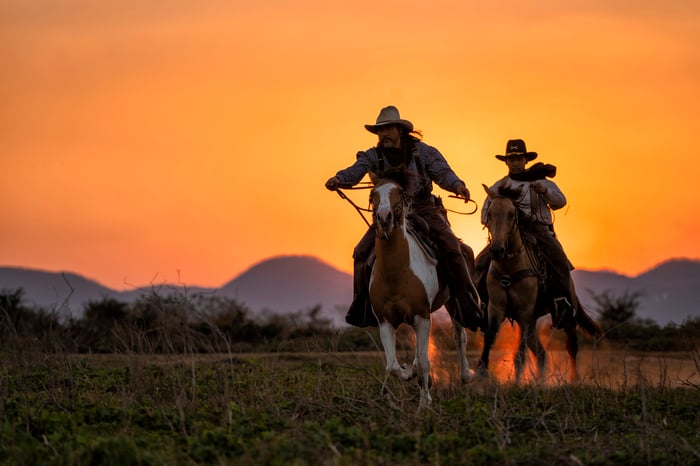 The all-important holiday season showed same-store sales increasing a strong 6% for the combined November and December period, illustrating that customers are seeing Boot Barn as their "go-to" store for holiday shopping.

Boot Barn expects to report net income of approximately $0.85 per share, a significant bump from third-quarter guidance of $0.73 to $0.77 per share. Net income per share for the current year galloped ahead 23% to $0.81, compared to $0.66 in the prior year.

Hitting the sweet spot of retail

When comparable sales are up, a retailer doesn't need promotions and discounts to drive traffic growth, resulting in higher gross margins and net results. Quality exclusive brands also support margin growth. If a retailer has both, it's a dynamite combination.

Our strong third quarter performance highlights the ongoing momentum in the business. Our performance included record growth in exclusive brand penetration, which along with our continued focus on full-price selling helped drive healthy merchandise margin expansion during the quarter. Additionally, I am pleased that the sales trend for the first two weeks of the fourth quarter are in line with the third quarter and am very proud of the team for continuing to deliver solid results as we expand the Boot Barn footprint.

The preliminary numbers were released prior to Boot Barn's presentation at an industry conference. The company expects to release its official third-quarter results, along with fourth-quarter guidance, on Feb. 4.

Boot Barn has been a wonderful choice for growth investors over the past couple of years. The numbers show that the company has laid an admirable foundation and is just now hitting its stride. Weaker retailers will fall by the wayside, but Boot Barn is emerging as a retail leader with more growth to come.

Boot Barn deals in classic Western wear, which is not subject to changing fashion currents, easing inventory planning and pricing pressures. If the company decides to venture into fashion items, that dynamic could change, but so far there are no signs of that.

Though the share price has increased in the past two years, I think it's justified, considering the company's performance, excellent management, and future prospects. Investors will be rewarded by Boot Barn, a winner in the retail space.

Why Shares of Walgreens, Michaels, and Boot Barn All Fell Wednesday