Please ensure Javascript is enabled for purposes of website accessibility
Log In Help Join The Motley Fool
Free Article Join Over 1 Million Premium Members And Get More In-Depth Stock Guidance and Research
By Daniel Foelber - Updated Jan 17, 2020 at 9:52AM

The 2010s were a good decade for the U.S. stock market, but an even better one for United Airlines (UAL -0.73%) which saw its stock rise 582%. United deserves some serious credit, as it was able to outperform the market. Given that airlines were once considered poor investments by legendary investors like Warren Buffett, this decade of outperformance is all the more impressive.

With 2019 fourth-quarter earnings approaching on Jan. 21, now is a great time to reflect on United's strong decade and look at what's in store for this year. 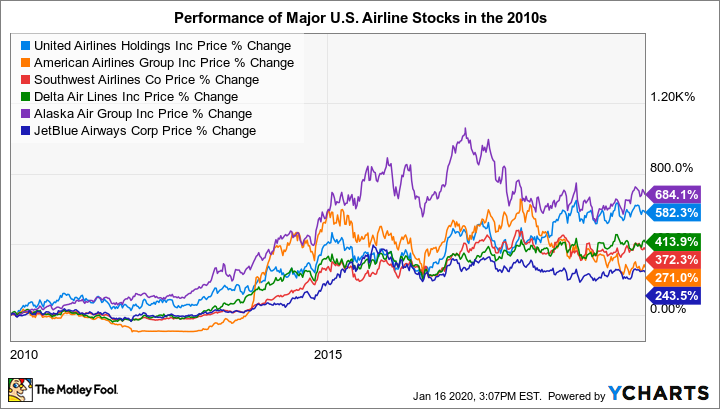 In many ways, it was the bankruptcy of Delta Air Lines (DAL -2.26%) and Northwest in 2005 that would set the stage for a surge in airline stocks. Back then, it was fuel costs that crippled airline margins, a problem that now seems to be less of a threat given the massive supply increase of U.S. oil that has more than doubled over the past decade. Delta would go on to merge with Northwest in 2008, followed by United Airlines' purchase of Continental Airlines in 2010. Although the deal was just $3.2 billion, it made United the world's largest airline at the time.

Fast forward to today, and United currently ranks as the third-largest U.S. airline. Aside from the infamous forcible passenger removal incident on Flight 3411 in 2017, the last five years have been beneficial to United, which has improved its balance sheet and pricing strategy. 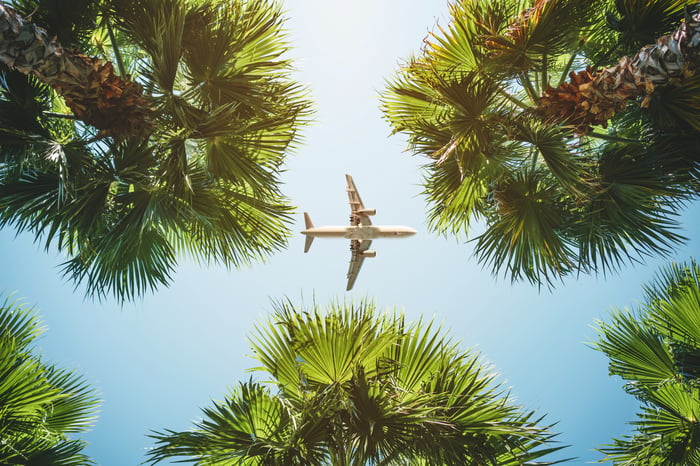 Although third-quarter earnings were impressive, United finds itself facing some difficult comparisons in 2020.

One of the challenges for United will be keeping its Cost per Available Seat Mile (CASM) low. CASM, often quoted as CASM-ex when excluding fuel, is a good way for airlines to view their total costs independent of the volatility of oil prices. United President Scott Kirby put it well when he asked on the 2019 Q3 earnings call, "So how can we continue to invest in our people and our customer experience and drive toward flat CASM-ex? For one thing, we plan to take advantage of increasing gauge."

Changing gauge means passengers switch aircraft throughout the course of a flight, typically from smaller planes that feed into a larger plane going to a larger hub. This process can be a headache for passengers but saves airlines money. By wanting to increase its gauge, United is saying that it wants more seats per departure, forecasting a 3% increase in seats per departure by the end of 2020. According to Kirby, United has "approximately 13% fewer seats per domestic departure compared to Delta," which is one reason why increasing gauge is the main way United will try to decrease costs going forward.

United touted that it was "#1 in on-time departures at all hubs where we face a large competitor,"  so investors should look to see how increasing gauge affects United's punctuality. That being said, the strategy does make sense for United, seeing as it has some of the largest hubs across major U.S. cities.

Large aircraft flying from big city to big city is an efficient way for airlines to avoid the typically more expensive use of regional aircraft. With the Boeing (BA -1.25%) 737 MAX expected to enter into service in the coming months, United could benefit from redirecting passengers to larger planes to save on costs. American Airlines (AAL -2.69%) and Southwest Airlines (LUV -0.17%) also have orders for the 737 MAX, meaning once the MAX enters into service there could be a spike in supply, leading to lower Passenger Revenue Per Available Seat Mile (RASM) despite the potential cost savings. 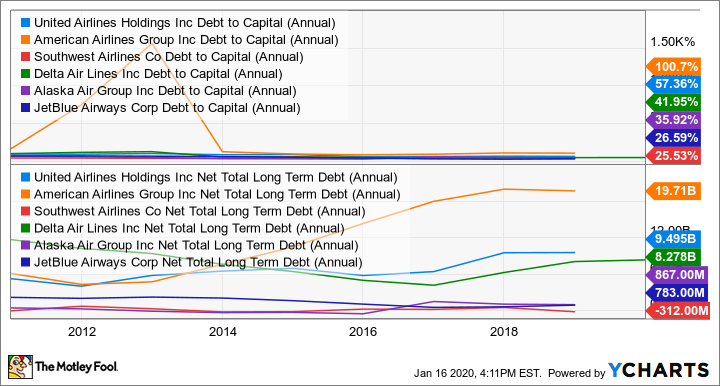 United and JetBlue Airways (JBLU -6.59%) are the only two major U.S. airlines that don't pay a dividend. In terms of a value stock, United is second behind American Airlines in net total long-term debt and debt to capital. A high debt to capital (D/C) ratio suggests that a company uses a lot of debt to finance its operations, which could be risky if revenues slow and a company is strained to make payments on its debt.

United's D/C ratio has come down since the start of the decade but remains something to watch in the event that revenue growth begins to slow as United expects in 2020. Companies with stronger balance sheets, like Southwest, which has the lowest D/C ratio and least net total long-term debt, tend to garner higher P/E ratios as financing operations with equity over debt is generally preferred. Therefore, it shouldn't be surprising that United and American have the lowest P/E ratios of the largest six U.S. airlines.

United had a fantastic decade, but the company's earnings forecast points to stalling growth. United is entering into what most great companies face after a meteoric rise -- determining how to grow from here. United is a decent airline stock, but investors should watch how the company adjusts to a year of tough comparables, if it will be able to keep costs low, and how the integration of the 737 MAX will affect supply, and thus, revenue.