Please ensure Javascript is enabled for purposes of website accessibility
Log In Help Join The Motley Fool
Free Article Join Over 1 Million Premium Members And Get More In-Depth Stock Guidance and Research
By Travis Hoium - Jan 17, 2020 at 10:18AM

As technology quickly "eats the world," changing the way we work, dine, learn, and interact with one another, the energy industry has been fairly insulated from disruption. A gas station today looks and operates similar to a gas station 50 years ago, power plants are still burning coal and natural gas to power the country, and the natural resources that fuel the energy industry are largely unchanged in the past century. But the status quo is about to be turned on its head.

As a new decade begins, a revolution is changing everything we know about energy. Renewable energy has reached a scale and cost that mean it's now replacing fossil fuels in electricity generation. In the auto industry, electric vehicles (EVs) are finally reaching a point where they can't be ignored by any manufacturer. And in the next few years, EVs may lead to a tipping point in energy away from fossil fuels to an electrified future. If they aren't already, investors better be paying attention.

Transportation is being electrified

There are now over 1 million electric vehicles on the road in the U.S., and that number surpassed 3 million worldwide in mid-2018, according to Statista and the International Energy Agency. That's a small percentage of the approximately 1 billion vehicles on the road today, but the EV industry is growing quickly. The number of EVs sold in 2018 increased by 64% to 2.1 million units worldwide, or about 2.6% of the 80.6 million passenger vehicles sold that year. This kind of growth in sales shouldn't be overlooked, even if it's from a relatively small base.

To illustrate how quickly the auto industry could change, let's run through a hypothetical projection below. This table assumes that total passenger vehicle sales globally stays flat through 2030 at 80.6 million per year. From the 2018 base of 2.1 million EVs sold and a 30% annual growth rate, by the end of the decade we could be looking at 60.7% of all passenger vehicle sales being EVs. 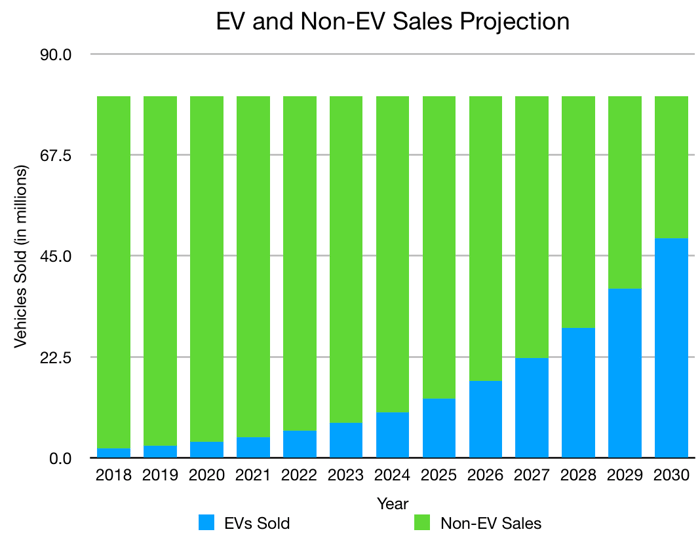 Chart and calculations by the author.

A lot has to go right for the electric vehicle industry for this to happen, whether that's growth in battery manufacturing or charging infrastructure being built out, but you can see that compound growth could change the auto industry quickly over the next decade.

The auto industry sees growth in EVs and is investing accordingly. Ford, GM, BMW, Nissan, Volkswagen, and even Porsche have either introduced an electric vehicle or will soon. VW has said that it it expects 15% of all sales will be fully electric vehicles by 2025 and its 12-brand behemoth plans to make 70 electric-powered models by 2028. Ford has said it expects one-third of sales to be fully electric by 2030.

Of course, the fastest-growing company in the industry is Tesla (TSLA 5.14%), and all it does is electric vehicles. And if the auto industry changes that quickly, there will be massive implications for oil and other legacy fuels.

The other transportation trend that shouldn't be overlooked: e-bikes and electric scooters. According to an analysis by Deloitte, 130 million e-bikes will be sold worldwide between 2020 and 2023. Then there's the boom in electric scooters, which are only now taking off as a business but could add many millions of electric-powered commuters in urban areas. E-bikes and scooters could make short commutes easier for millions of people and may be big disruptors in the next decade.

It's hard to dispute that transportation is going to be electrified in the 2020s. We can argue over how fast it's going to happen and what that disruption is going to look like, but more people will be getting around with electric transportation a decade from now than today. And if investors aren't out in front of that trend, they're already behind.

The grid is going green

Believe it or not, even without subsidies, wind and solar are the cheapest sources of new power generation in most of the country. That means as coal and nuclear plants age and are shut down, they're typically replaced by wind and solar, directly or indirectly.

Driven by increased economic viability, the growth of wind and solar energy over the past decade has been astounding. Wind production has more than tripled in the U.S., while solar generation is up 680-fold, albeit from a very small base. At the same time, power produced by coal has dropped by 50%. 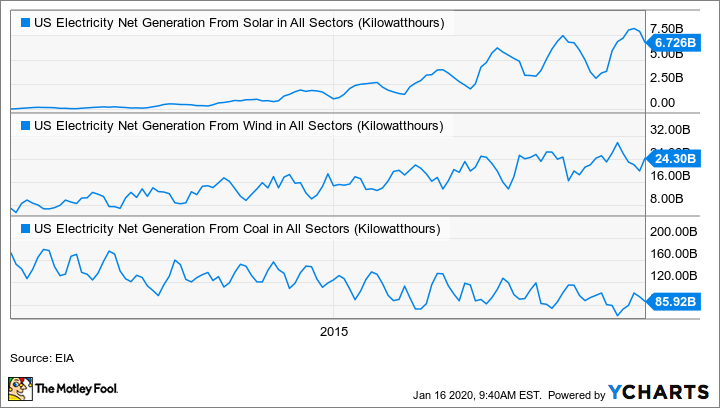 The growth rate of wind and solar may slow, but the amount of capacity installed each year is growing. And with a few years of growth and the continuing decline of coal, wind and solar will soon surpass coal in power production annually. Now that they're economically viable and getting cheaper every year, wind and solar will continue to grow over the next decade. By 2030, they will begin putting energy sources like coal in the rearview mirror.

The downside of the rise in renewables and electric transportation

As renewable energy and electric transportation sources grow, there are segments of the market that will take the brunt of the disruption. The last decade has been defined by the failure of some of the biggest companies in coal. Patriot Energy, Peabody Energy, and Murray Energy are just a few of the companies that have gone through bankruptcy.

This next decade, it could be natural gas and oil that go through financial difficulty. That may sound crazy today, but in 2010 it seemed unthinkable that coal generation would drop 50% in just 10 years. A small drop in demand could send oil prices and stocks tumbling. And if EVs gain market share at a pace anywhere near what's laid out above, the drop could be swift.

An energy transformation is coming in the next decade. Investors need to be prepared because there are risks as well as opportunities ahead.