Mother Nature didn't cooperate with the business during December as snowfall rates hit a 30-year low in some areas.

Vail Resorts (MTN 2.50%) shareholders are used to experiencing plenty of stock price volatility in the winter months. That period drives a huge portion of the company's fiscal-year results, and the North American snowfall levels are a significant factor. As a result, investors closely follow management's comments during the season, such as its fiscal first-quarter report, which it makes in late December.

Vail issued another of those important updates on Friday, this time revealing that its growth trends had been stifled by unusually low snowfall in some key geographies over the last few weeks. 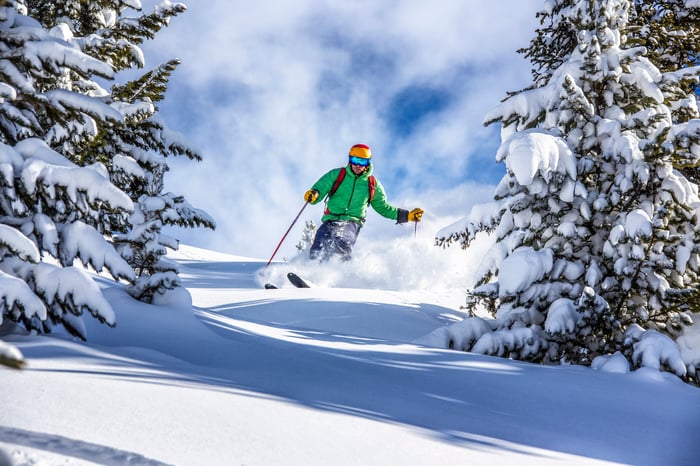 Skier volume fell significantly when compared to the prior period's strong results. Ski visits were down 8% during the first few weeks of peak season, Vail noted. On the bright side, average prices, which have been rising as Vail upgrades its lifts and adds more resorts to its season passes, allowed total lift ticket revenue to hold steady despite the reduced volume of visits. Still, lower visitation pressured ski school revenue and contributed to a 3% decline in dining sales.

"The ski season got off to a slower start," CEO Rob Katz said in a press release, "impacting both our local and destination guest visitation in the pre-holiday period." Management said results at both Whistler Blackcomb in British Columbia, Canada, and Stevens Pass in Washington were below expectations. The slump was driven by an unusually calm December, with snowfall rates at 30-year lows in some areas.

Investors weren't happy to hear about the vacation specialist's reduced ski visit volume, but Vail's update also contained some good news for the business. The company's aggressive spending on snowmaking machines apparently helped support early-season skiing at its Rocky Mountain resorts. Meanwhile, the steadiness of its season-pass revenue was a testament to its successful marketing and promotions strategies. Management said they were cautious in their initial guidance, given the strong start to the season last year, too.

The overall picture gave Vail confidence to affirm its full-year earnings target, which should be considered a win given the historically low snowfall rates in parts of North America last month.

Looking ahead, the company says weather conditions have improved at Whistler Blackcomb, and the resort is now operating all of its runs. Investors have to hope that the weather continues to cooperate so that Vail can avoid issuing a guidance downgrade when it posts its complete quarterly results in early March.