Please ensure Javascript is enabled for purposes of website accessibility
Log In Help Join The Motley Fool
Free Article Join Over 1 Million Premium Members And Get More In-Depth Stock Guidance and Research
By Leo Sun - Jan 19, 2020 at 11:15AM

The struggling retailer should expand its social media presence, launch an off-price banner, and explore new strategies with Sephora.

J.C. Penney's (JCPN.Q) stock recently dipped below $1 a share again after the company revealed that its comparable-store sales fell 7.5% during the nine-week holiday period. Excluding its ongoing exits from the major appliance and in-store furniture categories, its comps still declined 5.3%.

On the bright side, J.C. Penney didn't change its previous full-year outlook for a 7%-8% comps decline on a reported basis, or a 5%-6% decline after excluding its major appliance and in-store furniture products. It also reiterated its previous goals of boosting its gross margin and generating positive free cash flow for the year.

Yet J.C. Penney's core business is still in trouble. It's struggling with sluggish mall traffic as Amazon, Target, Walmart, fast-fashion retailers, and off-price retailers lure away its shoppers. CEO Jill Soltau is clearing out J.C. Penney's inventories, shutting down weaker categories, and closing stores -- but her plans aren't generating any fresh revenue growth yet.

J.C. Penney ended last quarter with just $157 million in cash and equivalents and needs to gradually extinguish over $4 billion in long-term debt, which doesn't give it much room for aggressive turnaround strategies. However, there are still three ways J.C. Penney can reinvent itself without breaking the bank.

J.C. Penney's limited reach on Instagram, which Piper Jaffray claims has an engagement rate of 85% among U.S. teens, represents a clear obstacle for a retailer that desperately needs younger shoppers.

Soltau is aware of the problem. During last quarter's conference call, she highlighted a few social media efforts, including the company's #MemoryMade hashtags for holiday photos and its new Shutterfly Picture Pop Selfie Studio, an experimental social media-oriented upgrade of its portrait studio.

Those baby steps are encouraging, but they aren't aggressive enough to close the gap against its larger rivals. Strengthening J.C. Penney's social media presence should be a top priority -- not an afterthought -- for Soltau's team.

2. Evolving into an off-price retailer

J.C. Penney opened an experimental "brand defining" store, which resembles a mix between Target and H&M, near Dallas in late 2019. The store looks a lot prettier than J.C. Penney's older stores, but it doesn't really solve the retailer's core problems. 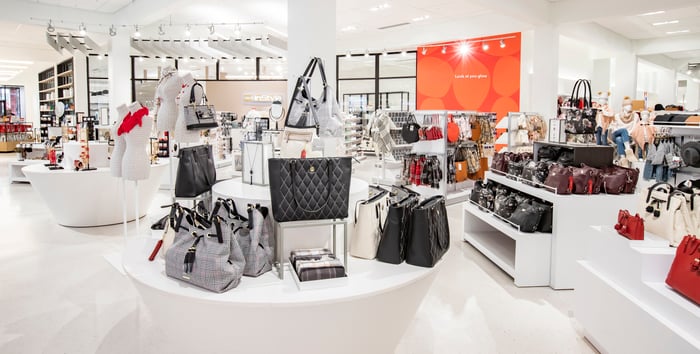 Instead of mirroring superstores and fast-fashion retailers, J.C. Penney should consider launching a new off-price banner, just as Macy's did with Backstage. During last quarter's conference call, Macy's CFO Paula Price stated that the retailer expanded Backstage to another 50 stores throughout the year, and that stores open for more than a year "continued to perform well, up mid-single digits, and have improved both margin and turn."

Off-price retailers like Macy's Backstage and The TJX Companies fared better than traditional retailers because they buy products at liquidation prices and sell them at lower prices than Amazon, and rotate their products quickly to bring back shoppers for "treasure hunts".

Like Macy's, J.C. Penney has the scale and excess inventories to evolve into an off-price retailer. That strategic shift could likely weigh down its short-term margins, but it might pave the way toward positive comps growth again.

LVMH (LVMUY 3.20%) operates Sephora store-in-stores in roughly three-quarters of J.C. Penney's stores across the U.S. Sephora is the second most popular beauty destination for U.S. teens, according to Piper Jaffray, and boasts a massive Instagram audience of 19.3 million followers.

Fortune once estimated that J.C. Penney's Sephora store-in-stores generated five times as much revenue per square foot as its entire department stores. In other words, most people are merely passing through J.C. Penney stores on their way to Sephora.

J.C. Penney recently tested out a new concept store for Sephora and complemented its beauty products with new in-store spa and salon services. That move might strengthen Sephora's position against its rival Ulta Beauty, but it's smarter to expand Sephora's presence by splitting its store-in-stores into smaller sections throughout J.C. Penney's stores -- which might prevent shoppers from making a beeline toward Sephora.

J.C. Penney still faces a tough uphill battle toward positive comps growth. However, aggressively expanding its social media presence, launching a new off-price banner, and exploring fresh strategies with Sephora could still prevent it from falling off a cliff.