2020's been kind so far to these two top hydrogen fuel cell companies. Which is more likely to keep outperforming?

The history of hydrogen fuel cell technology has been tumultuous. Investors get hopeful only to see new obstacles to success, but when the industry's potential seems to be on the brink of vanishing for good, investor confidence inevitably comes back, seemingly stronger than ever.

That's what's been happening with top hydrogen fuel cell companies Plug Power (PLUG 8.70%) and Bloom Energy (BE 6.21%). After a disastrous 2018, both stocks had fantastic rallies in late 2019, and are up more than 30% year to date! But which one is better poised for long-term success? Let's find out by taking a closer look at their recent performance and their prospects for growth.

Hydrogen fuel cells have been an underperforming part of the renewable energy industry. Could that be set to change? Image source: Getty Images.

These two companies are focused on very different applications for hydrogen fuel cells. Plug is working on motile applications: using hydrogen as fuel for vehicles both small (warehouse forklifts) and large (delivery vans and airport safety equipment). Meanwhile, Bloom is focused on hydrogen as an alternative fuel source for generators to supply power to buildings.

Plug has been around much longer than Bloom, having been founded in the late 1990s. During that time, it's had some modest success in deploying its technology in warehouses, where rotating shifts give hydrogen an advantage over battery technology, which requires extended downtime for charging. This trend seems to be continuing, with Plug announcing a $172 million contract with an unnamed Fortune 100 company for material handling equipment on Jan. 6.

Unfortunately, it hasn't been as successful with its plans to break into the heavy-duty motile market (vans, trucks, buses, trains, etc.), thanks in large part to the success of batteries as the go-to renewable transportation fuel. Plug has inked a contract with shipping giant DHL for 100 delivery vans, and has also provided a handful of such vans to FedEx. By comparison, Tesla alone sold 367,500 battery-powered vehicles in 2019.

If Plug Power is ever going to be more than just a niche forklift company, it's going to have to significantly ramp up its on-road applications, but batteries may have already beaten it to the punch.

Is it even green?

While Plug struggles with competition from batteries in its motile applications, Bloom is competing against other green energy sources like solar and wind. Indeed, there are questions about whether Bloom's technology -- which currently requires extracting hydrogen from hydrocarbons like natural gas -- is actually "green" or "renewable."

The company may be about to find out: California, Bloom's largest market, has mandated that all fuel cells need to switch to using 100% biogas this year in order to qualify for state incentives. This may put Bloom in something of a Catch-22. When those incentives were coupled with the option to use cheap natural gas as fuel, many companies adopted Bloom's signature Energy Server product. They could pay less for the product thanks to the incentives, pay less for the electricity because it came from cheaper natural gas, and tout that they were using "renewable energy."

There are other complications muddying Bloom's outlook as well. In California, recent rolling blackouts triggered by wildfire risks in the state could drive demand for on-site energy generation, which would benefit Bloom. On the other hand, a federal investment tax credit (ITC) for fuel cells is set to phase out in 2021, which could crimp future sales. That said, Bloom surpassed expectations in Q3 2019, with positive EBITDA and high free cash flow, especially compared to the perennially cash-flow-negative Plug.

Before we determine a winner, let's take a quick peek at the companies' fundamentals.

Bloom, which only had its IPO in 2017, has been consistently unprofitable, but just had a great quarter in terms of EBITDA and cash generation. However, one quarter doesn't make a trend. What has become a trend for the company is increasing revenue and paying down long-term debt: 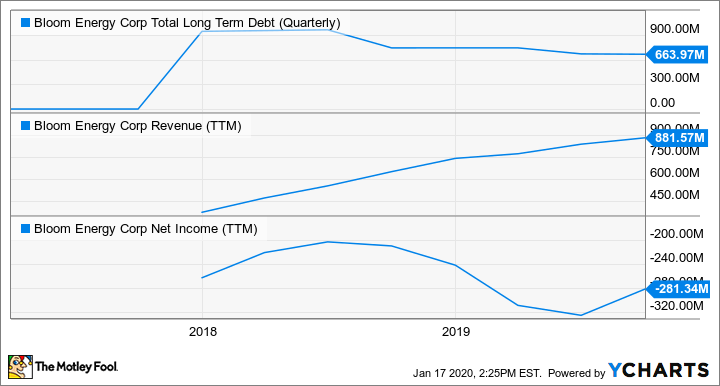 On the other hand, Plug has been around for more than two decades, and is still unprofitable and cash flow negative, with only two nonconsecutive quarters of positive free cash flow and one profitable quarter in its entire history. While its revenue is also on an uptrend, its quarterly net losses have actually been getting worse over the past year, and debt has been increasing: 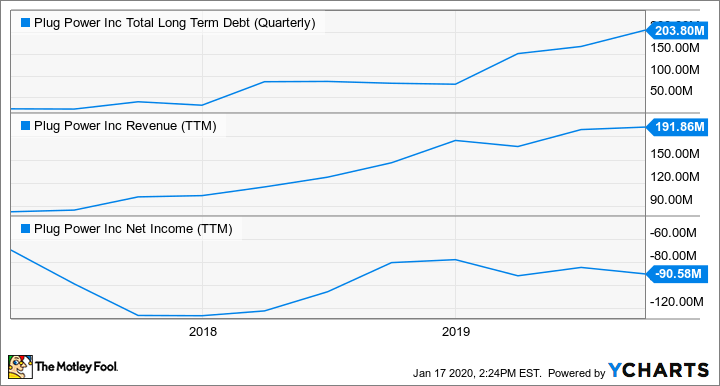 However, if you're bullish on hydrogen, can stomach substantial risk, and want to put one of these companies in your portfolio, I'd say Bloom is the better buy. Even though it has yet to prove itself and has a lot of potential pitfalls in the year ahead, the company's financial metrics are at least moving in the right direction, it has a potential pathway to success, and -- frankly -- it hasn't amassed a long history of disappointment like Plug.

That said, there are plenty of safer and more reliable bets elsewhere in the energy sector.