The growth-first business model is showing signs of stability, making this company a compelling choice.

Shares of Luckin Coffee (LKNC.Y 2.94%), as of this writing, are up roughly 185% from the IPO price of $17 that the company set in May 2019,  largely due to the substantial growth the company has shown over the past several months. At the end of December, the Chinese company operated 4,507 locations in China. That was up from 2,963 at the end of June and topped the more than 4,100 locations Starbucks has in China.

Average per-person coffee consumption in China is estimated to be five cups per year, compared 400 cups in the U.S. The potential to sell more and more java to Chinese customers, in particular the country's 400 million millennials, has Luckin and Starbucks expanding in the country. 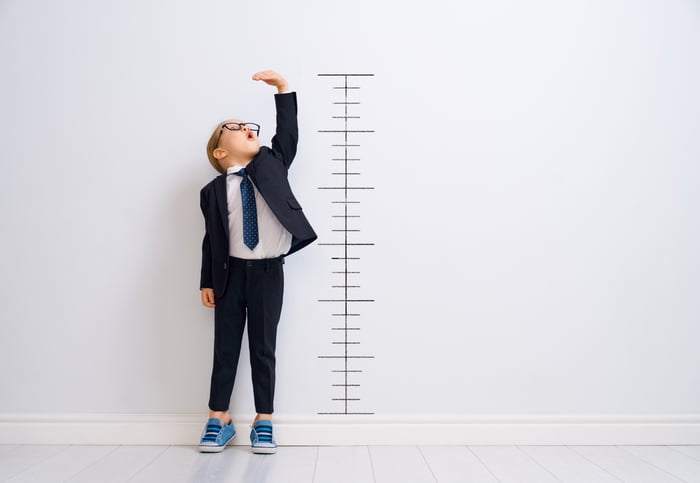 A race for the Chinese consumer

Thanks to a surge of marketing efforts, a growth-first business model, and heavy spending, Luckin quickly expanded across China.   Luckin locations are often smaller than Starbucks -- even without seating in some cases. The chain has "delivery kitchens" and "relax stores," but most of its locations are "pick-up stores" as the company aims for a cashierless experience.

The success of this new model has prompted Starbucks to increase its delivery efforts in China, and it recently partnered with Alibaba Group Holding's Ele.me to improve that side of its business.

Overall, Luckin's product is less expensive than Starbucks', with the average coffee at Luckin costing $3.50 per cup while Starbucks maintains an average of $4.80, according to an NPR report.

Luckin also features meals, juices, and teas, all of which carry a lower profit margin than coffee. While Luckin expects margins for teas to be 25% lower than coffee drinks,  the company says the teas, which are more popular in hotter months, will offset the decline of brewed coffee sales during that same time.

During the third quarter of 2019, Luckin saw a gross margin of 53.2% -- an improvement over the 37% during the same quarter in 2018. The increase was due to a higher average selling price.  The average total items sold  increased 470.1% from 7.8 million in the third quarter of 2018 to 44.2 million during the recent quarter. Revenue was strong, with total net revenue of $215.7 million, consisting of 74.3% from freshly brewed coffee drinks and 25.7% from other products.

The company has improved efficiency in relation to store preopening expenses, mainly from decreased rental costs before opening a location, decreasing costs by 26.9% year-over-year to 1.4% of net revenues, compared with 12.4% during the third quarter of 2018. The company's net loss increased in the quarter to $74.4 million, however, Luckin's cost of goods sold decreased from 63% or revenue a year ago to 47% in the most recent quarter, showing improvement as the company scales.

In addition, Luckin recently announced a partnership with Kuwait-based Americana Group to open locations in India and the Middle East, continuing the barrage of store openings, steep customer acquisition costs, and heavy marketing costs. Coffee Business Intelligence projects 7.7% compound annual growth rate (CAGR) of coffee consumption in India between 2019 and 2023 and Mordor Intelligence projects a 7.5% CAGR in the Middle East from 2019 to 2024, which justify the continued expansion.

The future is bright for this coffee chain

Several factors make Luckin a compelling company for growth investors. Improving gross margins, a digital-first approach to sales, further expansion potential, and a focus on convenient, low-cost, high-quality products make Luckin an attractive company to own -- especially as it expands in China and other growth regions like the Middle East and India.

If coffee consumption projections are correct for China, both Luckin Coffee and Starbucks will benefit. While there will surely be a head-to-head battle between the two companies for market share, Luckin is strategically aligning itself to capitalize on the growth.