The smallest pacemaker in the world has just received official regulatory approval.

Medtronic (MDT -0.42%) announced on Tuesday that it had just received Food and Drug Administration (FDA) approval for its Micra AV pacemaker. Not only is this particular pacemaker the smallest in the world, but it's also one of the few lead-less pacemakers available on the market, which are less invasive and have fewer complications than their lead-containing counterparts.

Heart blocks are generally the result of heart disease and get progressively worse over time. The Micra AV pacemaker treats patients with atrioventricular (AV) block, a condition where the electrical signals in the heart are partially (or completely) blocked as they travel to the various chambers. This can often cause dangerously slow heart rates, requiring patients to wear pacemakers. 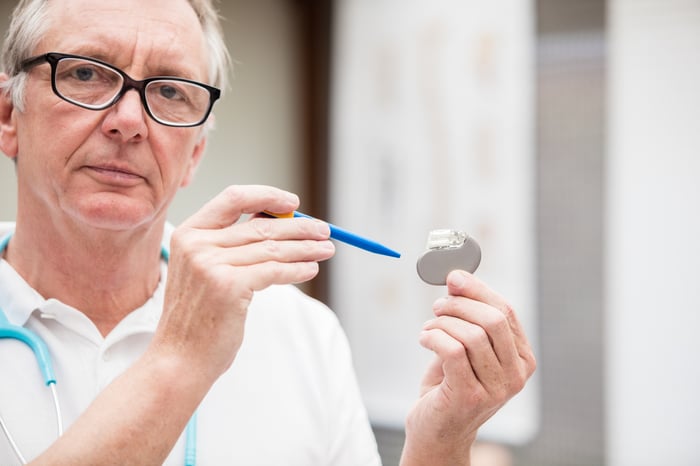 Leadless pacemakers are considered an alternative to their conventional counterparts, taking up less space while reducing the chance of infection or serious complications. Medtronic's Micra pacemakers are almost 20 times smaller than regular pacemakers -- with a battery life that's almost twice as long.

Medtronic will begin offering training to physicians and medical personnel in the next few weeks, with a full launch coming later this spring. The company had originally submitted a request to the FDA to expand the use of its pacemaker to patients with AV block based on strong results from two separate clinical trials.

Analysts at RBC Capital markets went on to say in a note to clients that this new Micra AV pacemaker could have a much larger patient population to draw from thanks to this approval. They went on to add that in comparison to regular pacemakers, the Micra pacemaker gets three times the financial reimbursement from healthcare plan providers.