Please ensure Javascript is enabled for purposes of website accessibility
Log In Help Join The Motley Fool
Free Article Join Over 1 Million Premium Members And Get More In-Depth Stock Guidance and Research
By Rich Duprey - Jan 21, 2020 at 11:02AM

The mattress maker will prove the viability of direct-to-consumer brands in the public markets.

The consumer health and wellness trend may be most visible in the food and beverage industry, but the IPO filing for online mattress retailer Casper makes it clear that it's a much broader opportunity than that. The S-1 declares, "We believe sleep is rapidly becoming the third pillar of wellness and ... the business of sleep is growing and evolving into what we call the Sleep Economy."

The mattress maker has some deep-pocketed backers, like Target (TGT -0.47%), which has invested in several rounds of Casper's financing, indicating some shrewd people believe there's a significant opportunity here.

Yet even the smart money can be extremely dumb sometimes, and there are plenty of risks surrounding both the mattress industry and Casper itself, such that investors shouldn't take the threat lying down. Here are some points to consider when determining whether this direct-to-consumer (DTC) mattress retailer is really a sleeper investment opportunity. 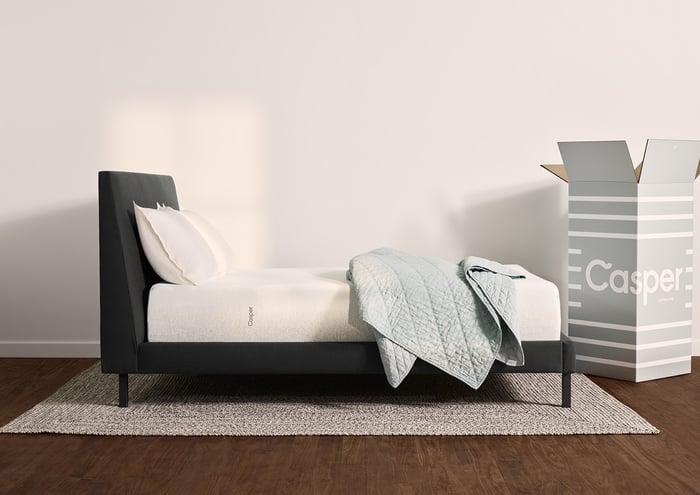 Everyone needs to sleep

Casper sees itself as a "bellwether" of the digitally native vertical brand, those companies with an intense niche focus that cut out the inefficiencies of traditional retail supply chains.

Low start-up costs have reduced barriers to marketplace entry, allowing DTC brands to upend traditional retailers. Procter & Gamble (PG 1.12%), for example, was caught napping by the rise of Dollar Shave Club, which ended up getting bought out by Unilever (UL 0.59%) for $1 billion.

Target itself reportedly almost bought Casper for $1 billion, but chose to invest in the business instead, as it seeks to capitalize on the opportunity DTC brands represent. The retailer also invested in other digitally native brands like Bevel (which P&G subsequently acquired) and Harry's (which was bought by Edgewell Personal Care (EPC 0.88%) last year).

Casper believes its own addressable market is worth $432 billion globally, and points to research showing it's growing at a compounded rate of 6.3% annually, with analysts expecting it to hit $585 billion by 2024. Since Casper's current business only targets about 16% of the total, or $67 billion, the mattress maker sees substantial room for growth.

Casper's sales are growing quickly, with revenue of $357.9 million in 2019, up 43% from the year before, and year-to-date sales are 20% higher at $312.3 million. Not only does it have its e-commerce site, but it has 60 physical retail stores where it sells directly to the customer, as well as partnerships with 18 separate retailers.

Target is naturally one of them, displaying Casper's mattresses both on its website and in its stores, but Costco (COST 2.01%) and Amazon.com (AMZN -2.49%) are partners as well. In fact, Casper's partnerships are becoming an increasingly important part of its business, with revenue from them representing over 20% of sales for the first three quarters of 2019, up from just 13% at the end of 2018.

Yet as impressive as Casper's sales growth has been, it's also seeing losses grow.

The high cost of customer acquisition

The mattress maker incurred losses of $73.4 million in 2017, which widened to $92.4 million in 2018, with an accumulated deficit through December 31 of over $232 million. Because it doesn't have much experience operating at scale, it can't say with certainty whether it will be able to reverse those losses either.

What it has found is that customer acquisition is getting more expensive, and the amount it is spending on sales and marketing is accelerating. Numerous companies new to the market that had a seemingly good growth story came undone because they couldn't profitably maintain the level of marketing necessary to grow the business.

Unlike some of those businesses that are based around a lot of repeat business, a Casper customer is mostly a one-and-done transaction. That means it must continuously acquire new customers.

Meal kits are probably the closest example, but third-party food delivery apps are another. Low barriers to entry have allowed competitors to come in and virtually commoditize their businesses, destroying profitability. There are also a lot of online mattress companies with a similar business model to Casper, including Leesa, Purple, NectarSleep, and more, and any premiums Casper may be realizing could soon evaporate.

Put this IPO to bed

Casper is trying to offset the effect of the competition by establishing itself as a "sleep company," offering pillows, sheets, lamps, and even dog beds, but there may be limits. After all, all of those products are well represented at retailers both on and offline, and Casper is still seen as a mattress company.

Its IPO will indeed be a barometer of whether other direct-to-consumer businesses can or should go public themselves, since a failure would leave many questioning why they should trust another business to succeed if Casper couldn't make it.

Yet with powerful retail backing, it would seem Casper has a better chance than others of succeeding. Investors, though, would be better off waiting to see if the mattress maker can withstand the rigors of the public markets and deliver profits as readily as it can deliver a mattress.