After rumors surfaced that Grubhub (NYSE:GRUB) hired financial advisors to help it steer a sale of the company, the food delivery service declared it most definitely was not shopping its business, and had no plans to do so. But maybe it ought to rethink that, as a sale looks like the one chance Grubhub has for growth.

Driving into the ditch

Domino's CEO Richard Allison recently said the third-party delivery model was unsustainable, and pointed to Grubhub as an example of a company that boosted revenue, but destroyed profitability by changing its business model. It went from restaurant menu aggregator to delivery company, and discovered there is no profit to be found in doing so. 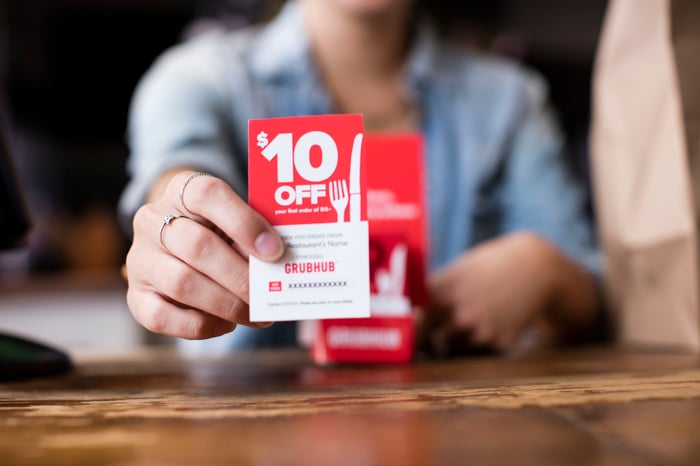 While Grubhub had reported profits of $99 million, or $1.12 per share, as recently as 2017, analysts are forecasting it will post a fourth quarter loss of $3.7 million, and full-year profits will be cut to just a third of where they were last year, or $0.63 per share.

Grubhub cut its own revenue and profit forecast for the year when it reported earnings back in October, citing weak order frequency as one of the reasons.

Because there are so many meal delivery companies now, and discounting has become the norm to attract both consumers and restaurants, no one is making any money, with Uber Eats running a near $1 billion deficit over the first nine months of 2019. Unless there is industry consolidation, with companies like Grubhub selling themselves or buying a rival, a war of attrition will likely continue.

Thus, Grubhub ought to entertain the thought of selling itself. Grubhub has lost a significant amount of market share over the past 12 months, down to around 30%, as rival DoorDash expanded, and now leads the market with a 37% share, according to Second Measure.

Grubhub CEO Matt Maloney blamed "promiscuous" consumers for its woes, saying there was no longer any loyalty among them to a particular app.

That's the same problem Domino's faces, as consumers now have a broad array of food options to choose from for home delivery. Where pizza was once the only real option, third-party delivery apps have made virtually all cuisines available.

Yet Maloney has previously acknowledged -- at least obliquely -- that the delivery business wasn't sustainable, when he said the industry was in a "weird bubble that is about to burst." Perhaps he believes that his company will be one of the few still standing when it does.

While competitors are bleeding red ink too, combining Grubhub with one of them, either as the takeover target or as the buyer, would help everyone stabilize customer losses. The real problem is that Grubhub remains overvalued.

But Grubhub has a difficult growth outlook ahead. Finding someone willing to pay a premium for the stock, especially one of the other players in the space, seems like it would be a hard sell.

It may take the bubble that Mahoney envisioned bursting before Grubhub (or anyone else) is at a valuation that makes sense. Perhaps that's why the meal delivery company was able to forcefully deny the rumors: it knew that with the premium the business was sporting, there would be no buyers.

A buyout, though, is still the best chance Grubhub and other third-party delivery apps have for growth.